Zamfara is one of the thirty-six states in Nigeria. It has a state capital in Gusau, a prominent town. There are other urban areas which make up the state’s local government areas. This write-up will incorporate the towns which are in the fourteen LGAs of the state. 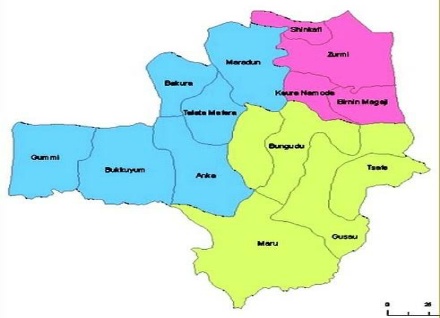 The then military regime of General Sani Abacha took a decorous move to create Zamfara State from the old Sokoto State. This was realised on January 1, 1996 with the new state becoming an independent entity.

The State is situated in the North Western part of Nigeria, and it occupies an area of 39,762 square kilometres. Zamfara State shares common boundary with Sokoto State and Niger Republic to the north, Katsina State to the east and Kaduna, Niger and Kebbi States to the south.

The Hausa and Fulani people make up the state population. A considerate number of Gwari, Kamuku, Kambari, Dukawa, Bussawa and Zabarma ethnic groups are also found within the state. Others which are residents include Igbo, Yoruba, Kanuri, Nupe and Tiv tribes. Hausa is the official language of Zamfara state due to their vast population. Other notable languages spoken in the state are English, French, Fulfulde, Arabic, and minority languages like: Yoruba and Igbo.

On economy, Zamfara state is basically an agricultural state as a vast number of the people engaged in various forms of agriculture, from subsistence to commercial farming. Agricultural products like millet, guinea corn, maize, rice, groundnut, cotton, tobacco and beans are available in commercial in the state. No doubt the state has its slogan ‘farming is our pride’.

List of Local Government Areas and Towns in Zamfara State

Zamfara State has fourteen (14) local government areas and they include:

There are many urban areas in the state. Gusau the state capital and Gummi are the prominent towns here. Below is the rundown of the fourteen local government areas in Zamfara State with their respective towns and districts:

Anka LGA is one of Zamfara State Local Government Areas. With an administrative headquarter in the town of Anka, which the area got it name from, there are many other notable urban areas. They include the following towns and districts: Dan Galadima, Bagega, Waramu, Wuya, Yar’sabaya, Magaji, Sabon-Birni, Matseri and Barayar-Zaki.

Bukkuyum Town acts as the administrative headquarter of Bukkuyum LGA. The area got it name from this prominent town. There are many urban areas and districts which make up the area, and they include: Zauma, Zarummal, Jema, Yashi, Ruwan, Nasarawa, Masama, Adabka, Gwashi and Kyaram.

ALSO READ:  How To Send Money From Pakistan to Nigeria (2023)

Bungudu LGA of Zamfara State is one of the state’s Local Government Areas. The areae is made up of communities and urban areas which include: Bungudu, Bingi South, Bingi North, Tofa, Sankalawa, Bela, Samawa, Karakkai, Furfuri, Kwai-Kwai, Gada, Kwatar-Kwashi and Nahuce.

Gusau is the principal local government area in Zamfara state. This is due to the fact that it houses the state capital. Being a developed area, there are many urban areas which make up. They include the following: Bye Pass, Emir, Janyau, Magaji, Tudun Wada, Ungumar, Dawaki, Wonaka, Wanke, Galadima, Mada, Madawawoki, Magami, Januaryana and Rijiya.

Kaura Namoda LGA of Zamfara state has it headquarter in Kaura Namoda, a famous town in the state. The area has other districts and urban communities of Banga, Dan Isa, Gabake, Kagara, Galadima, Yankaba, Sakajiki, Marafa, Madaro and other notable towns.

Maradun LGA is one of the Local Government Areas in Zamfara state. The area is made up of towns and urban communities like Birnin-Kaya, Tsibiri, Maradun South, Maradun North, Dosara Damaga, Garo, Damagiwa, Faru, Magami, Gidan-Goga and Janbako.

Maru LGA is one of Zamfara state Local Government Areas. With an administrative headquarter in Maru, a prominent town which the area got it name from, there are many other notable urban areas which make up. They include the following: Bindin, Bingi, Dorowa, Ruwam, Januaryandii, Kuyan Bana, Kanoma, Dan Kurmi, Dan Sadau and Dan Gulbi.

Shinkafi LGA is one of Zamfara state Local Government Areas. It has an administrative headquarter in the town of Shinkafi and the area council covers other towns and urban communities of Badarawa, Shinkafi South, Shinkafi North, Shanawa, Katuru, Kurya, Kware, Jangeru, Galadi and Chiki.

Tsafe LGA of Zamfara state has it headquarter in Tsafe, a town which the name of the area is derived from. Notable urban areas in the area include: Tsafe, Bilbis, Chediya-Danjibga, Kunchin kalgo, Dauki Keta, Kizara, Kwaren, Ganuwa, Yan Kuzo, Yan Waren, Daji Yandoto and Daji Yankuzo.

Zurmi LGA is one of the Local Government Areas in Zamfara state. Headquartered in Zurmi town, which the area got it name from,  other towns and urban communities in Zurmi LGA include: Boko Dauran, Birni Tsaba, Dole Galadima, Yanruwa, Dutsi, Januaryasa, Kwashbawa, Mashen, Rukudawa and Yan Buki.

Zamfara is a state known for it agricultural resources. The state is alluded with the slogan “farming is our pride” because of its investment in this sector, which has resulted to jobs opportunities. Zamfara State holds some renown tourist attractions which are of historical or religious importance. These include Jata ancient settlement; Kanoma Hills; Kiyawa City Walls; Kuyambana Game Reserve; Kwartarkwashi Rock/Water Spring; and Namoda’s Tomb in Kaura Namoda.

This article covered the list of notable towns in Zamfara state, and the local government areas they are located in.