The print media in Nigeria is blessed with so many newspapers in various languages. There are popular Yoruba newspapers which are written for those who can’t understand English language and these publications are printed mostly in Yoruba speaking states in the country. 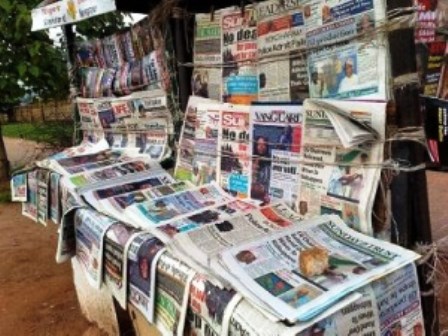 Looking at the Nigerian newspaper market, one will reach a conclusion that all papers are written in English language.

This assumption is drawn from the fact that in many big cities with a heterogeneous tribal base, the major newspaper stands sell papers written in English.

However, we have newspapers that are written in Nigerian Languages. Growing up in the northern part of the country, I know the Aminiya newspaper written in Hausa Language.

The name of the newspaper is Iwe Irohin and it was established in 1859. Aside this, other newspapers had been published in Yoruba.

In this article, the top best Yoruba Newspapers in Nigeria that are popular and provide information and news events in the country will be discussed.

Alaroye, a weekly newspaper started in 1985 by a then 25-year-old Musa Alao Adedayo had grown to be the most popular and the most widely read newspaper published in the Yoruba Language.

The main aim of the newspaper is to help sustain reading and writing in Yoruba Language. Since its establishment in 1985, Alaroye have had its down times which had kept it strong till date.

First, after it first publication, it only published few editions before packing up. After about 5 years in 1990, it came up again. This comeback never lasted as it folded up in about two years.

However, since it returned in 1996, it had remained strong in the newspaper business till date. These ups and downs can be attributed to it was then a one-man business with limited fund and the experience level of its founder.

With better planning, enough resources and a post-graduate diploma in journalism, Adedayo was able to ensure Alaroye was able to become a viable publication.

It was considered as the new innovation in community reportage and strict adherence and application of the basic tenets of professional journalism.

The publisher’s discipline and managerial acumen makes Alaroye stand out among other Yoruba newspapers. No doubt, Alaroye (The explainer) is one of the best Yoruba newspaper.

Among other recognition, it was one of the newspaper at the forefront of the December 12 election that MKO Abiola was considered the winner. The neutrality of reporting and analyzing the situation, resulted in the increased circulation of the paper to around 150,000 copies per week, competing favourably with other national dailies such as Punch and The Guardian.

In English Language, it means “to seek help for the poor and masses and to free the oppressed from the oppression of the powerful ones”.

This bilingual Yoruba- English newspaper was founded by Isaac Babalola Thomas in 1927.

Since its establishment, it had lived strong till date and still a force to reckon with. rocked the media world in the late 1920s.

Its bilingual concept and style brought it into limelight and found itself competing with other popular newspapers.

Alariya, a popular newspaper in Nigeria had become one of the best Yoruba newspapers loved by the Yoruba people of south western, Nigeria.

This newspaper is published by Lanre Dodo Balogun. It is one of those papers that is preserving the reading and writing culture in the Yoruba Language.

Irohin Owuro is one of the indigenous media that preserve indigenous languages – Yoruba language to be precise.

The visit of the Minister of Information and Culture, Lai Muhammad in 2016 to this newspaper confirms the status of this newspaper as one of the best in Yoruba news publishing.

The paper is one of the recent functional newspapers and it is published by Mr. Yinka Alabi.

To complete the list of top Yoruba newspapers in Nigeria, we have to add the Gboun gboun newspaper.

This newspaper is published in the Yoruba and had grown to be one of the best in the newspaper market.