Would you like to give your fertility a nudge and also increase your odds of getting pregnant? There are good numbers of Yoruba herbs that can boost your conception chances. These products are tested to give you a solution to the agonising wait for pregnancy. If you have made a decision on this, how about we take a peek at the top of these Yoruba herbs? This will be the basis of this article, as we will highlight the best Yoruba herbs that works for fertility. 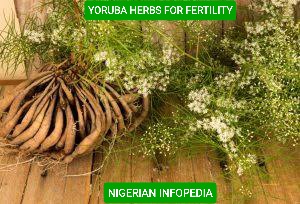 In this article, we will look at the top and best Yoruba herbs and plants that is very useful for persons with infertility issues. It is also used to treat the different health conditions that bring about barrenness. Below is the rundown of these herbs:

Naturally, Ficus Exersperata is a shrub or a small tree that bear figs; it also has a pairing leaves. It’s interesting to know that this fig-like tree is an essential and one of the most effective herbs to boost fertility. The Ficus Exersperata is widely known in the country as sand paper tree. The Yoruba name for this natural herb is Eepin. Other local names in language like Nupe is Kawusa, Ameme in Edo language, and Anwerenwa in Igbo language.

This is another herb that adds up as one of the Yoruba herbs for fertility. The herb is a Indian spinach, called as Curculigo pilosa. It is referred as Epakun in Yoruba language. On a whole, this natural herb is useful herb against fertility problem of a kind.

ALSO READ:  5 Pastimes Popular With Nigerians You Should Try

Typically, this is melon seed which is a common thing. The above name is the  scientific representation. This egusi seed is a very useful herb in treating fertility. Nonetheless, different herbs such as Calliandra Portoricensis Catamenia or Calliandra Portoricensis is also make use by Yoruba doctors to provide high-quality treatment for internal heat.

Cassia Alata is a good herb that can work for fertility issues. There is also another called zee mays known as agbado in Yoruba. All these herbs are used as a treatment for abundant or trifling discharges.

Ficus Exersperata is a natural herb made of extracts like ginger. The combination of this with other ingredients is an effective treatment for strong discharge. One of the reasons for it being used often is that the herb have the proper characteristics for the treatment of disease of this nature.

This is another herb in the list. It has Yoruba names like Oju-eja, Jeja, Iya-Dudu or Orokoro. The herb is called in Igbolanhuage as Kpokokwa, and in Hausa as K’afar Mutuwa. The general use of this herb is to promote the chances of conception in women.

Boerhavia Diffusa is a good herb known  as Hogweed. It is known in Yoruba as Etiponla; in Igbo language as Azeigwe; and in Hausa as Babba-Juju. The use of this herb is used to treat female infertility and as well as menstrual pain. The normalisation of the hormones in the body is the main function of the herb. In terms of the usage, the leaf of this Hogweed is best eaten as a vegetable soup. This is simple as one can pound the leaves with pepper (Capsicum annuum), add salt and take it into the body.

Cleome Viscose, also known as Consumption Weed is a herb used to treat many conditions and issues related to female infertility. The Yoruba name for this natural herb is Ekuya.

Cocos nucifera, widely known as Coconut in English language, is a good herb for infertility issues. In terms of how it’s been used, the root of this plant is utilize to treat uterine diseases. Agbon is the Yoruba name for this natural herb.

Ako Bolobolo is the Yoruba name for this natural herb for the treatment of infertility issues. Commonly known as chinese bar, it is also known as Yanka-Dafi in Hausa, and Obo in Igbo. Ako Bolobolo is always used to induce fertility and make the womb receptive so as to open way for the implantation and growth of foetus. The Esan people Esan people based in the South-South region of Nigeria are the people that often use this herb.

INFERTILITY CONDITIONS AND THE YORUBA HERBS TO USE

There are many conditions that surround the inability of a woman to be fertile and give birth. These irregularities also involve menstruation. Sadly, a good number of these conditions are not properly solved with the use of orthodox medicine. The following are these conditions and the appropriate herbs to be used:

Heavy menstrual flow could likewise bring about much blood cluster during menses. It is accounted for that abundance coagulated blood in monthly cycle is an indication of female conceptive problem. While coagulated blood comes out, it ought not get regular and if so ought to be appropriately treated. Ladies who have such encounters can use Sorhum bicolour known as karandafi or Citrus arantifoli known as Lime.

ALSO READ:  Tips To Make Learning Enjoyable And Effective For Students (For Teachers)

Herbs such as Cassia alata known as Asunwon Oyinbo, Zee mays known as Agbado are good to use for the situation. Other local herbs that are utilized in treating menstrual issues include the African Cucumber or Momordica charantia known as Bitter Melon.

Polycystic Ovarian Syndrome is a health condition that accompanies a lot of symptoms and has different causes. Nonetheless, it is as yet a hormonal condition. Two of the Yoruba herbs suggested to treat this condition incorporate Calliandra portoricensis known as Tude and Aristolochia repens known as Akoigun in Yoruba.

This is when menstruation is more frequent than the normal one month period. Some traditional specialists of Yoruba Medicine use herbs like, Citrulus lonatis known as Bara, caltiandra portoricensis known as Egbo Tude, Labelabe, and so on as treatment for this condition.

WATERY OR TOO LIGHT MENSTRUAL FLOW

Fibroid is a very avoidable infertility condition of women. Just as it can be avoided at all cost, it’s best to use Cassia alata known as Asunwon Oyinbo to treat it.