Yobe is one of the largest states in Nigeria. The State is ranked 5th in the country with respect to land area. With Potiskum being the largest city, Damaturu is also a capital city in the state. This article will enumerate the rundown of local government areas and towns in Yobe state. 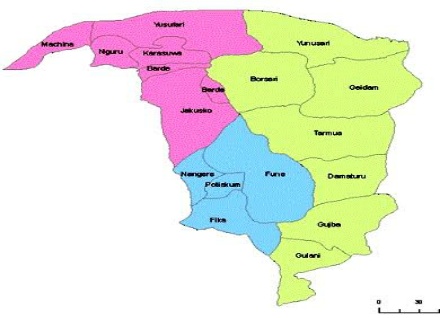 Initially, Yobe State was under the old Borno state. It was later carved out by the then regime of General Ibrahim Babangida on February 27, 1991, to become a an independent entity. Yobe State has its administrative capital in Damaturu town. It occupies an area of 45,502 square kilometres to become the sixth largest state in Nigeria. Situated in the North Eastern region of the country, Yobe state shares common boundary with Borno state to the east, Gombe state to the south, Bauchi and Jigawa states to the East and Niger Republic to the north.

The Kanuri and Fulani ethnic groups make up as the predominant occupants of Yobe State. There, the emirs of the former Kanem-Bornu Empire have played a part in the politics of this area for nearly 1000 years. However, there are other ethnic groups like Hausa, Ngizim, Karai-Karai, Bade, Ngamo, Shuwa, Bura and Margi still make up the state. Islam is the major religion among Yobe people.

Yobe state is an agricultural area, and the state’s economy depends greatly on this. The State is noted for agricultural production in farming, fishing and livestock rearing provides. Almost all of the state populace practice agricultural activities either subsistence or commercially. However, Yobe state is not limited to only agriculture, as it has commercial quantities mineral deposits of gypsum, kaolin, and quartz.

List of Local Government Areas and Towns in Yobe State

Yobe State has seventeen (17) local government areas. Let’s take a gander at the towns, notable communities and districts that are situated in these areas.

Bade LGA is one of Yobe State Local Government Areas. It has an administrative headquarter in the town of Gashua. There are other towns and notable urban areas in Bade LGA. They include the following: Dogona, Katuzu, Lawan fanami, Lawan musa, Sarkin Hausawa, Tagoli, Sugum, Dawayo, Zangon musa, Zango Umaru and Gwio-kura.

Damaturu LGA of Yobe State is a developed Local Government Area in the state. It has an administrative headquarter in the central part of Damaturu, an urban centre and state capital. There are many other notable urban areas which include the following: Bindigari, Fawari, Damokasu, Damaturu central, Madiri, Gabir, Kolallawa, Gabai and the rest which also make up.

Gulani LGA is one of the Local Government Areas in Yobe State. With an headquarter in the town of Bara, there are many other notable urban areas in the area. The notable towns and communities in Gulani LGA include the following: Bara, Borno-Kiji, Bularaba, Bumsa, Burasari, Chandam, Dokshi, Gabai, Gagure, Gargari, Garin Tuwo, Kukuwa and others which makeup the region.

Machina LGA is one of Yobe State Local Government Areas. It is situated in the northern part of the state, and borders with the Republic of Niger. Machina town, which the area got it name from, is the administrative headquarter of the Machina LGA. The list of other notable urban areas include the following: Adturu, Barinari-Lamiri, Bogo, Bulseri, Damai, Dimago, Dole, Faramiram and many other towns and districts.

Nguru LGA of Yobe State is one of the state’s Local Government Areas. It has an administrative headquarters in the town of Nguru, which the area got it name from. Other notable urban areas in Nguru LGA include: Aroro, Bajigama, Bakwa, Bambori, Bilelam, Bujiji, Bulabulin, Bulangua, Bulanguaram and many others.

ALSO READ:  How To Become An Investment Banker in Nigeria: Requirements & Steps (2023)

Potiskum is an urbanised local government area in Yobe State. It has an administrative headquarter in Potiskum, a commercial city and the largest urban centre in the state. There are many urban areas which incorporate this developed local government area. They include the following: Potiskum, Dogo Tebo, Dogo Nini, Hausawa, Mamudo, Ngojin, Alaraba, Yerimaram, Garin Daye, Badejo, Bolewa and Bare-bare.

Tarmuwa LGA is one of the seventeen Local Government Areas in Yobe State. It has an area council headquarter in Babangida town. There are many other urban areas here, which include the following: Barkami, Bulturi, Churokusko, Tarmuwa, Jumbam, Koka, Sungul, Koriyel, Mafa, Mandadawa, Babangida and Shekau.

Yobe is one of the states of mention in Nigeria. The State is the home of most of the country’s agricultural products like cotton, groundnut and beans. Yobe State has one of the largest market of cattle in the West Africa region.

Yobe State has a list of prominent personalities which are few to mention include: Ahmed Ibrahim Lawan, Nigeria’s Senate President; Buba Galadima, an influencial politician; and the rest of other notable people from the state.

That’s it on the list of local government areas and towns in Yobe State. We believe you now have a clue on where to visit in the ‘Pride of the Sahel’ state.