To know which states in nigeria are the largest yam producers in the country, you have to take into cognizance the quantity at which this particular agricultural produce is supplied or exported by each Nigerian state. The yam zone areas as it is popularly called aren’t that much, since yam farming requires expertise and about 14 weeks to mature when planted. The type of soil matters and not all states have the best soil to support yam farming in Nigeria. 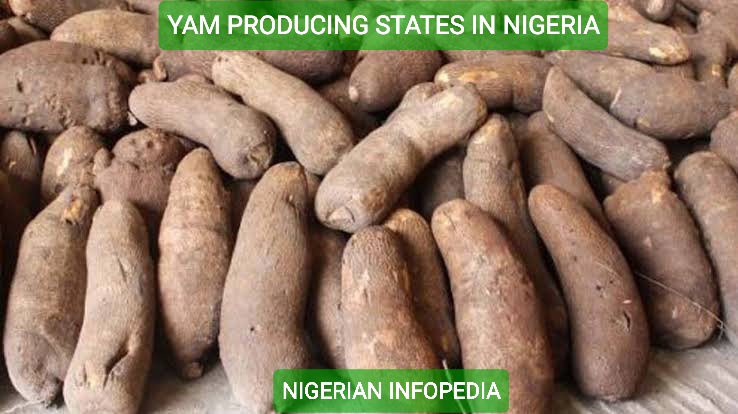 The domestic market in Nigeria has been in increasing demand for yams, necessitating the supply of significant numbers of yam tubers. This has also improved the agricultural produce’s marketability. People frequently buy yams for domestic consumption, but there is also a market for large-scale yam sales. As a result, the focus of this article will be on the country’s top yam producers.

Nigeria generates large amounts of yam, accounting for around 70% of global yam production. As a result, it is known as the world’s largest producer of yams. Let’s take a look at the states that contributes to these figures.

Taraba is the highest yam producing state in Nigeria, accounting for having produced 3,162 1000 metric tons of yam in 2005, which amounts to over 12.89 percent of Nigeria’s total yam production. Taraba state contains over 4 million hectares of arable land, although only about 1.5 million hectares are believed to be exploited for yam farming each year.

This has undoubtedly resulted in the availability of yam produce in the area, as well as on a wholesale basis. Taraba State is known for its farm commodities, which primarily consist of cassava and yam. Wukari and Danacha are two sites in Taraba state that contribute immensely the supply of yam in the state.

Benue is a state known for its agricultural products. The state has a commercial quantity of yams, as well as the majority of the food crops. In addition, Benue is the second largest yam producing state with an annual yam produce of 1.5 million tons.

The Zaki Biam yam market, which specializes in the sale of yams, is a well-known market in Benue state. The market itself is large, with a large supply of agricultural products such as yam. It’s really no understatement to suggest that the yam market in Africa is the largest, given the size of the Zaki Biam market.

Cross River is Nigeria’s third most substantial yam producer. This state is one of the highest producers of yams for its own use and that of its neighbors. In the northern region of the state of Cross River, yam output is particularly high. In particular, the Ogoja area in Cross River State has a vast yam plantation, making the agricultural produce commercially viable. So, if you’re looking for a place to buy a significant quantity of yam in Nigeria’s south-southern region, Ogoja in Cross River State is the place to go.

The state of Adamawa is situated in an area that fosters the development of yam, an agricultural staple. With some places in the state ideal for growing yam seedlings, the yield of these crops should be plentiful. Adamawa state, according to the World Data Atlas, has a significant increase of yam production. According to the data, yam production is over 10,000 metric tons. Because to the abundance of yam, it is now available in commercial amounts for wholesale.

Nasarawa is another of Nigeria’s largest yam-producing states. Albeit the state is recognized for its solid minerals, it moreover produces some commercial quantities of agricultural products, like yam. Nasarawa State has a long history of yam farming in Nigeria, having exported over 150 tonnes of ‘paper’ yam species to the United Kingdom at one point. This, along with a slew of other yam-related local businesses, demonstrates that the state is a suitable area to buy yam in bulk.

The state of Niger is well-known for its yam tuber cultivation. A substantial amount of Yam comes from the state. As a result, a survey was done to determine the frequency of yam output in three yam-producing local government areas (LGA) in the state. Bosso, Paikoro, and Shiroro are the chosen local government areas. According to the survey’s findings, the three LGAs generated 2.03 metric tonnes of yam per year, accounting for 10% of Nigeria’s total yam production. This graph depicts the amount of yam produced in this state.

Kaduna State is yet another top yam-producing state on our list. This state is situated in the country’s north central region.  The production of yam in Kaduna is thought to be at an all-time high. Each year, the state contributes upwards of 5 metric tonnes of yam. As a result, they are regarded as one of the country’s top yam producers.

A significant quantity of yam is sold at Enugu’s commercial marketplaces. In general, the state produces a large amount of yam in metric tonnes. They have a large number of farms dedicated to yam plantation. Additionally, you can purchase commercial amounts of yam from one of the state’s marketplaces. All of these factors contribute to the state’s status as one of the country’s top yam producers.

ALSO READ:  The 3 Major Types of Religions in Nigeria & Their Beliefs

The state of Oyo completes our list of Nigeria’s top yam growers. This appears to be an agriculturally inclined state in the country’s south west. Agricultural products generate a portion of the state’s revenue. On an annual basis, Oyo State produces around 2.4 metric tonnes of yam. This makes them one of the top yam growers in the world.

Yam is a common agricultural product found in practically all of the country’s supermarkets. There is definitely a business in this enterprise, given the enormous demand for agricultural commodities. The top ten highest yam producers in Nigeria were summarized in this article. These are the finest sites to purchase yam in bulk. Furthermore, this will serve as a reference to where you may obtain huge quantities of food in order to succeed in this lucrative industry.