General Yakubu “Jack” Dan-Yumma Gowon was born on December 19, 1934 in Lur, Kanke Local Government Area of Plateau State. Gowon’s parents, Nde Yohanna and Matwok Kurnyang, left for Wusasa, Zaria as Church Missionary Society (CMS) missionaries in the early days of Gowon’s life. Gowon was the fifth of eleven children. Gowon grew up in Zaria, Kaduna State and had his early life and education there. 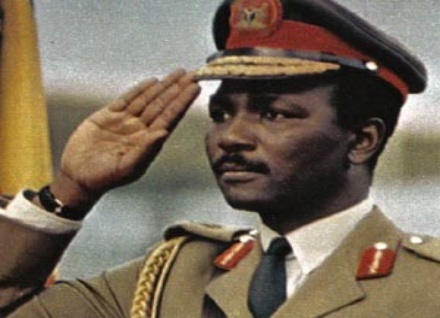 Gowon served in the Congo region as part of Nigeria’s peacekeeping force there in the early 1960s. Gowon rose to Battalion Commander in 1966, at which time he was still a Lieutenant Colonel.

On December 1, 1966, Gowon became the Military Head of State of Nigeria after the death of former military head of state, General J. T. U. Aguiyi Ironsi. On December 27, 1967, Gowon divided the four regions of Nigeria into twelve states and declared a state of emergency in a final attempt to resolve the ethnic tensions in the land. However, later the Eastern region declared itself the independent state of Biafra with Emeka Odumegwu Ojukwu as its leader. This action initiated a bloody three-year civil war between 1967 and 1970.

With the help of the United States, Great Britain, and the Soviet Union, Gowon isolated Biafra diplomatically and the Nigerian Army and Navy isolated it physically. By the second year of the war the Nigerian government occupied well over half of the original Biafra. On December 12, 1970, Biafra surrendered as the government banned all Red Cross aid and restricted food supplies to Biafra. During the 30 month conflict more than one million of the country’s thirteen million people had died of starvation.

By the mid-1970s Gowon was emerging as an international leader and was involved in the establishment of the Economic Community of West African States (ECOWAS). On December 29, 1975, however, while Gowon was in Uganda for an Organization of African Unity summit meeting, the army removed him from office.

Later Gowon acquired a PhD in political science at the University of Warwick in the United Kingdom. He also served a term as Churchwarden in the local church, St Mary the Virgin, Monken Hadley.

In 1976, Gowon was implicated in the coup d’état led by Lt. Col Buka Suka Dimka, which resulted in the death of the now General Murtala Mohammed, and later declared wanted by the Nigerian government. However, in 1981, he and the ex-Biafran President, Emeka Ojukwu, were pardoned during the Second Republic under President Shehu Shagari.

In 1983, he returned to Nigeria, and in the 1990s he formed a non-denominational religious group, Nigeria Prays.

Today General Gowon who is based in the UK serves an ‘elder statesman’ role in African politics, operating (for example) as an official observer at the Ghanaian presidential elections 2008.

Gowon also is the founder of the Yakubu Gowon Centre (1992). The organization is said to work on issues in Nigeria such as good governance as well as infectious disease control including HIV/AIDS, guinea worm, and malaria.