Home Facts Information Vegetation Zones in Nigeria And Their Characteristics 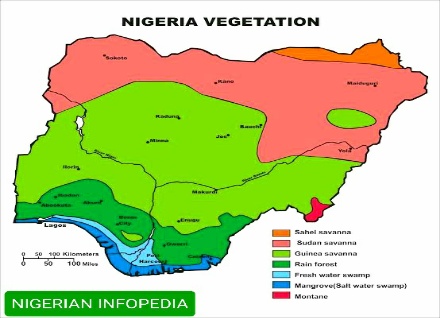 List of Vegetation Zones in Nigeria and Their Characteristics

There are many kinds of vegetation in Nigeria, but they can be structured to major ones which reflect for most areas of the country. A vegetation of a specific area depends on the type of plants covered there, and it may differ from other areas. The following is the list of notable vegetation zones in Nigeria;

Below is the detailed rundown of the different vegetation zones in Nigeria and their characteristics;

Rainforest is a significant vegetation in most areas of the country. It covers high-mountainous multi-tiered tropical forests that have been preserved. This vegetation is found mainly along the right bank of the lower reaches of the River Niger and in the valley of the River Cross. Trees in the rainforest areas are of the height of 40-45 m form the first upper tier. These trees are very huge such that they make up most forest reserves in the country. In the other way, the trees of the second and third tiers are especially densely strewn with epiphytes, intertwined with lianas that rush towards the sun.

In the north of the rainforest zone, the annual amount of rainfall does not exceed 1600 mm, and this leads to the decrease of forest growth. Also, relative humidity is lower here, and soils are drier. Some trees shed their leaves in the dry season. Still, further to the north of the vegetation, the forests are becoming sparser, and leads to the beginning of the savannah vegetation.

The freshwater swamp forest is one of the major types of vegetation in the forest zone of Nigeria. The others are the coastal vegetation, mangrove forest, riparian forest and lowland rainforest, which all make up the tropical rainforest of southern Nigeria.

The freshwater swamp forest is a species diverse vegetation and it’s one of the most productive ecosystems of the world. Found in the Niger Delta region of the country, it is a store house of biological diversity providing suitable habitats for plants and some rare endangered wildlife. The region is categorized by freshwater, and this makes the vegetation zone more suitable for fish farming.

The Mangrove vegetation is a type of forest vegetation found just before the Atlantic ocean. This vegetation depends on the coastal location of the zone which the constant influence of salt sea water gives the nature of these areas. The soil in the Mangrove zone is extremely poor and contains salt. The mangrove areas which are stabilized and are non-salt-marsh are suitable for growing of rice. This type of vegetation is found in the coastal southern part of the country.

The Montane vegetation zone is a specified vegetation situated in high-mountain areas. This is the mountain and plateaus vegetation that is foundbin the elevated areas like Jos Plateau and Obudu. The Jos plateau is one of the highest points in Nigeria and it is covered with this type of vegetation. The Montane vegetation is a grassland zone but the slopes are covered by forests. This characteristics make the area to be potentially perfect for growing of rich crops of different vegetables and small grain crops, and also a good place for pastures like the Obudu Cattle Range.

This is the largest vegetation zone in the country. The Guinea Savannah covers almost half of the territory of Nigeria. These regions is occupied by moist guinea grassland, and the annual precipitation here is 1000-1400 mm on the average. The grass grown here reaches a great height which could cover a man, and also make a large animal invisible. This type of savanna vegetation is where the elephant grass is very predominant.

On classification of the trees in this area, groups of them rise above the grassy sea: drought-resistant kaya, isoberlinia, mitragina. Some of them have trunks twisted from annual fires.  A look at the climatic conditions, the savanna looks lifeless and the trees stand bare in the first half of the dry season. In the middle of this season, a smoke screen rises over the savanna: the dry grass burns, which is burned yearly while preparing the land for crops. On appearance of the first rains, juicy shoots of young grass and green leaves grows to keep alive the Guinea Savannah.

The Sudan savannah is a vegetation in the north of the Guinea savanna. Here, the amount of precipitation decreases to 500-1000 mm and the dry period lasts more than six to seven months. Also, parts of the vegetation zone is covered with a dense but low grass. The different types of acacia gives a distinctive appearance of the landscape of this vegetation.  Moreso, the baobabs is very predominant as it is difficult to imagine the Sudanese savanna without them.

On the whole, the natural conditions of the Sudanese savanna are favorable for the progress of agriculture and animal farming. This is preferred for specific arable farming of sheep, cattle, and goats graze on vast pastures.

The Sahel savannah is the most sere vegetation in Nigeria, as the main characteristic of the zone is desert vegetation. The annual rainfall in this area is poor, and the wet season lasts 3 to 4 months, hence the vegetation of the sahel zone is rare which results to the present of extremely short grasses. In the sahel vegetation zone, plants like Ngibbi, Acacia raddiana, Leptadenia, and African myrrh are the most predominant.