Drainage system is a very important factor for housing and agricultural projects. It is the removal of surface and subsurface water from a wet area through natural or artificial drainage. Most agricultural soils have adequate internal drainage to prevent severe waterlogging, which can lead to anaerobic conditions that hinder root growth. However, many soils require artificial drainage to increase production or control water supplies. 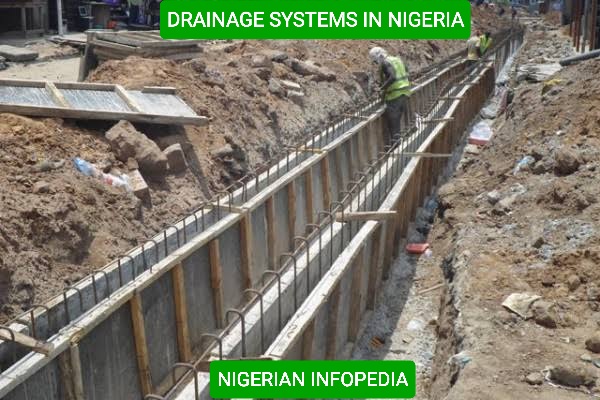 It’s appropriate to confine and distribute runoff water because farmers need it to hydrate their vegetation. The freshwater supply of a town is also replenished using the gathered water. Water becomes more contaminated the longer it remains on a surface. You will have a better understanding of their functions and how they interact if you are aware of the different drainage system types. The various drainage techniques used in Nigeria will be thoroughly discussed in this article.

Here are the various major drainage system types in Nigeria.

The most common drainage system in housing units is the downspout and gutter system. The downspout is linked to the gutter, which is how this drainage system functions. The extra water that accumulates on the building’s roof is then removed by the gutter. If the gutter and downspout are not built, the surplus water would fall directly on the ground and the home, possibly causing erosion and damage. Additionally, improperly built gutters and downspouts can result in flooding and water pooling. The downspout serves as the gutter’s drain. Along with carrying rainfall from the gutter to the ground, it also functions as a pipe.

The water that has accumulated on the roof is subsequently directed toward the ground. In order to avoid water from gathering at the downspout’s base, the downspouts discharge the water haphazardly. The water is emptied into a rain bucket or an extension made of aluminum. Water is sent via this aluminum to other drainage systems near the house. Additionally, they might be directed into subterranean drainage systems. All of them are done to prevent flooding in the compound.

The downspout makes sure that rainfall does not splash against the building during a downpour but instead drains into the earth via the gutter. Another thing to keep in mind about the downspout is that the water is released far away from the building’s foundation at the base to avoid any possible harm.

ALSO READ:  The Lucrative Nature of Pharmacy In Nigeria

Slope drainage system consists of underground pipes built under. It causes water to slant downward as it leaves the structure. As a result, slope drains enable water to pass via a pipe that slopes downhill. Typically, either concrete, steel, or plastic is used to build these pipes. There won’t be any accidents because the pipes are always covered.

Systems for drainage on slopes reduce installation costs. Additionally, it reduces installation time, saving the land owner some money that would have been incurred during construction. Due to its high efficiency, a slope drainage system significantly decreases the need for maintenance.

A surface drainage system is one that is appropriate for flat ground. Rainwater may collect on flat surfaces when the soil is level. If there is no suitable drainage system, this could cause water to collect and pose a threat to the building.

Systems for surface drainage might be used as a driveway or maybe even a walkway. Simply digging a few ditches, which act as a funnel for the extra water, is all that is required to create a surface drainage system. These ditches channel water away from the ground, reducing flooding.