A bill is a piece of legislation or writing that is submitted to the national assembly for consideration before being passed into law. However, a bill needs the President of the Federal Republic of Nigeria’s signature to become law. Before becoming a law, the legislative house must deliberate. 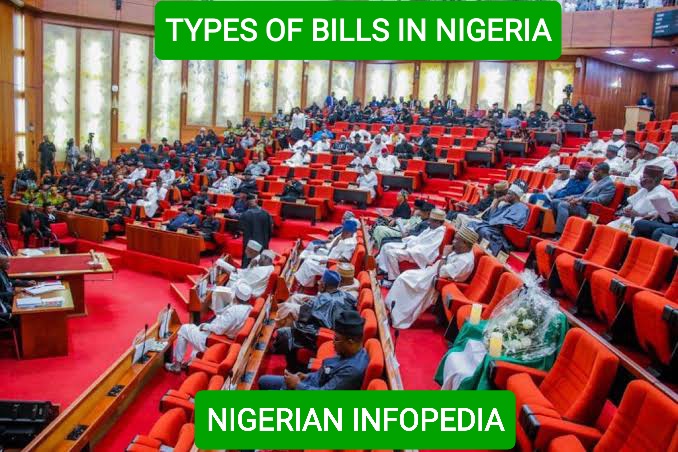 We’ll be knowing the different types of bills in Nigeria, their functions, the role they play, how they are passed into law, and the debate process of the national assembly. In Nigeria they’re two types of bills, first, the Appropriation bill known as (National Budget) bill, and the constitutional amendments bill, known as (the legislative bill)

TYPES OF BILLS IN NIGERIA

The two aforementioned sorts of bills operate somewhat differently, but the following is where the main distinction lies: The Executive (Office of the President) typically sends the Budget (Appropriation Bill) to the National Assembly.

Perhaps the National Assembly rejects an appropriations bill, but it is sent returned to the Presidency (the Executive) with changes. Following the completion of these revisions, the Bill is often brought back to the National Assembly for approval. The measure then becomes law as a result of this action.

One on either hand, legislative bills typically originate from the National Assembly and are sent to the President for his signature to become laws.

The President occasionally declines to sign a measure and instead sends it back to the House with recommendations. The goal of this procedure is to improve the bill and make it legislation that will benefit society more broadly.

Legislating in Nigeria is the responsibility of the National Assembly of the Federal Republic of Nigeria. Section 4 of the Nigerian Constitution established it. The National Assembly is composed of a Senate with 109 members and a House of Representatives with 360 members that are based on the federal congress of a foreign body which is to guarantee equal rights to all citizens.

Every state in Nigeria has at least three senators representing each constituency. The federal head office of all the national budget agency located in the federal capital city of Abuja.

As we know another form of the bill passed is known as the National Budget bill, particularly a legislative written format for government officials’ funds. The risk involved in this billing system is handled by the executive arm of the government. Before any legislative body comes to play in the budget matter, the executive arms would draft the budget which will wait for final approval.

Before the Bill is approved the president would have to stamp his signature for final confirmation. The proposal needs to undergo a series of reading from the house of assembly, which comprises the upper low, and upper house members. Many Appropriation committees has be set for deliberation, which involves every member of the committee.

ALSO READ:  Colonialism: Impact of Colonialism on Nigeria by the British

Every committee is said to have a committee chairman who oversees the affair of the members, before the bill gets to the necessary authority, the committee chairman would have to deliberate and the host of top recognize members. After the deliberation, they move to the house for further approval.

To make a successful bill presentation, the committee preceding will submit a copy of the report for the final date to be fixed for the house to consider the next cost of action towards the supposed appropriation bills. The Senate and House of Representatives will have to come up with different appropriation bills to pass for reading.

The three arms of government are summed up as a legislative arm which comprises the Executive arm/bill, the House of Representatives/bill, and the Senate house/bill. Any of the listed receiving bill proposals would tend to follow the appropriate order for a sequential treat.

House of Representatives tend to handle bill regarding business rule and committee, nonetheless, the Senate takes care of the state rules for deliberation after concluding they’re awarded a contract for state-level jobs.

The National Assembly’s Legal Department will then rewrite the bill and make any necessary adjustments to bring it into compliance with the requirements of the respective committees of both chambers of legislation that feel that it requires improvement. The following step in the procedure is the gazetting of the bill, which involves informing the public that a new piece of legislation is being examined so they can provide input. The first reading comes next.

The bill then moves on to the committee stage, when all of its components would just be carefully reviewed and public hearings might be scheduled. The measure moves on to the Third Reading after the Committee Stage is completed and a Committee Report is generated. A clean copy of the bill, which incorporates all amendments, is created following the third reading and signed by the clerk with the support of the Senate President or Speaker, depending on the legislative chamber.

A fresh copy of the bill is then sent to the other house for concurrence after being duly signed and endorsed by either of the legislative chambers. The National Assembly Clerk enrolls the bill for the President’s signature when it receives concurrence in the Senate and House of Representatives. The bill becomes law if the president signs it.

In Nigeria, there are absolutely two major types of bills, appropriation bills, and legislative bills. In the course of this article, we have been able to differentiate between them and give instances of how they operate. We believe the information contained in this write-up will be very helpful to you.