Home Facts Information Traditional Marriage Rites in Ijaw Culture: How It Is Done

Traditional marriage rites in Ijaw land follows the Ijaw cultures and traditions and anyone wanting to marry a woman of same origin must marry her according to the Ijaw marriage process defined by the culture. 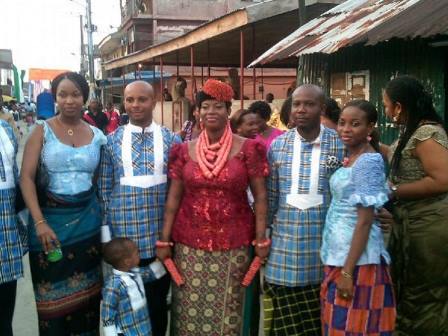 This article will highlight the steps involved in a typical traditional Ijaw marriage.

First, who are the Ijaws? The Ijaw are the fourth largest ethnic group in Nigeria. they live major in the riverine area in the Niger Delta region which is oil producing.

They people are majorly engaged in fishing as their primary activity and depends heavily on aquatic animals for their delicacies.

Ijaw is made of the Kalabari, Okrika, Okoloba and the Nembe clans. They have a rich culture and tradition that bond them together and keep them sane.

Ceremony is an integral part of the Ijaw culture and this includes marriage ceremony, burial ceremony or even naming ceremonies among others.

Our focus today is on the Ijaw traditional marriage rites and it process.

Traditional Marriage Rites In Ijaw Culture: How It Is Done.

1. Agreement Between The Man And Woman

In an ideal situation, there’s no force marriage in Ijaw land. People marry on the basis of I see you, I love you, I want to marry you – ok, I accept!

This then means before you can even think of marriage in the Ijaw culture, you should have someone you want to marry of which both of you have agreed to live your life together.

This in turn means you need to get a lady you are both compatible with and get to know each other. During the period of dating, you can then decide to want to tie the knot.

However, someone’s parent with his consent can choose a bride for him to marry.

After both have agreed, they both will relay it to their family independently and the families would carry out a background check on each other. If the result comes out satisfactory, then the traditional marriage rites continues.

The next step after the agreement of a man and woman to get married in Ijaw culture is Introduction. In Ijaw marriage tradition, introduction is known as “Ware ogiga gbolo” which simply means “to knock”.

The introduction ceremony is meant for the both families so they would get to know each other.

The groom together with elders from his family visit’s the bride’s family and make their intention of marrying their daughter known.

They are expected to come along with them gin and other beverages.

However, if the groom is not Ijaw, he is allowed to come with Kola nuts but just know that it is not in their culture to break Kola nut on this occasion.

They usually would be given a warm welcome and discuss on issue like the date of the traditional wedding and the list of items they should come with (bridal list).

The Ijaw tradition marriage bridal list contain the list of items the groom is expected to bring on the day of the traditional wedding ceremony.

There’s something unique about the Ijaw marriage bridal list. Unlike in other ethnic groups that their list contains food items, the list of items on this list in their culture does not contain food items except for only salt.

ALSO READ:  Vegetation Zones in Nigeria And Their Characteristics

The bride price is also not a one-size-fit-all. It varies depending on some factors but generally, it is determined by the father of the bride based on the financial strength of the groom.

Also in modern times, as a result of migration, people now live in urban areas and no longer need canoe and fishing net and as a result, only money for these items are provided in this case.

This is the main activity and the one that everyone look forward to as it marks the official date for the man and woman becoming husband and wife.

The ceremony takes plan in the house of the bride and well wishers come to celebrate with them. It is usually a colourful event. The bride’s family would first inspect and make sure the items brought by the groom and his people match the bridal list they handed over to them. Only when it does before the wedding ceremony continues.

The groom will be asked to show the people his wife. To make sure he knows his wife and he is sure of his decision, the bride is presented to him alongside a group of maidens.

He then selects his wife and her family accepts the gift and they are being showered with prayer after which the ceremony continues with singing, dancing and eating.

ALSO READ:  How To Apply For The Young African Leaders Initiative, YALI (2022)