Kogi State is a confluence state in Nigeria’s north central region. The state is made up of ethnic groups such as the Ebira, Igala, and Igbira, as well as other minor tribes. Although there are some distinctions, these tribes’ customary marriages are nearly identical. We’ll look at the prerequisites for traditional marriage in Kogi state in this article. 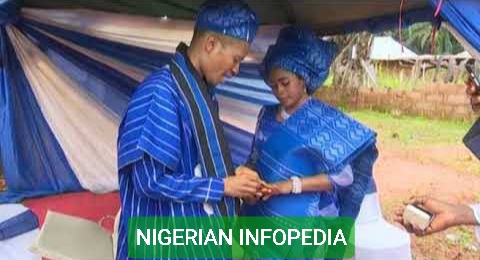 The following is a list of presents that are part of Kogi state’s traditional marriage obligations.

The bride price of a Kogi lady is often decided upon by the girl’s parents. This deal is heavily influenced by the man’s financial situation.

After the original bride fee, there are further costs to be paid, which include the following:

The Ebira traditional marriage necessities in Kogi, as well as the methods involved, will be discussed here.

In Kogi state, a conventional marriage begins with two lovers who have decided it is time to marry one other. Or between a man who is attracted to a lady who reciprocates his feelings.

The very next step is to pay a visit to the bride’s family and inform them of his plans. In Kogi tradition, the groom is not supposed to go alone.

Because the groom is unable to visit his in-laws alone, his parents and elder family members do so on his place. This is normally after the groom’s family has conducted a series of background checks and examinations. They continue to submit their intentions known once they have established the Lady’s history.

The new husband ‘s family arrives with presents on the next day set by the bride’s family to hear about the bride’s family decision. The gift is delivered and distributed with family members and neighbors once it has been approved. In Kogi state, the process of offering this gift is called as Ise Ewere.

If all went smoothly, the real unveiling date is set. The groom’s family provides a lot of meals and drinks to enjoy with the bride’s family and neighbors on the introduction date. This is to inform everyone present that the Lady will be their future bride.

The bride price will then be offered by the groom’s family during the introduction day. The bride’s price isn’t set in stone, and will be determined by the bride’s family and the groom’s financial position. Aside from the Bride Price, there are many other costs to consider. These were already mentioned in this article.

After you’ve completed all of these steps, the conventional wedding day is the following step.

STAGE 5: THE DAY OF THE TRADITIONAL MARRIAGE

The husband ‘s family brings tubers of yam on the traditional wedding day, which is the most important thing. This yam will be given to the bride’s family as a present. Then the genuine celebration commenced.

A religious representative will be summoned to bless the union, based on the couple’s beliefs. The bride will be led to her husband’s residence after a lot of festivities and joy!

The opening part in the wedding planning process is the introduction. A man don’t ever goes to his in-laws to inform them of his interest in their daughter, according to Ebira and most other Kogi State traditions. This is instead done by his parents and especially older women in his household.

They’ll identify themselves and the cause for their visit to the girl’s parents. It is also their responsibility to perform proper investigation on the bride’s familial history, including her upbringing, family history, and any other pertinent information about the girl and her family.

And how about details relating the man’s own family? So, I’ll leave it to you to make a suggestion. The lady’s family also does their own research to learn more about the man’s ancestors. All of this is done in order to determine whether or not the union will operate.

After they have confirmed that both families are in good health, a date for the formal introduction of both families is usually set after some time has passed. Then there’s the wedding day.

The groom does or doesn’t come on this day since his family members are typically willing to help him out. The bride’s family mesmerizes the groom’s side with food and drinks out of their own. Similarly, the groom’s presents are distributed among the groom’s neighbors and extended family. This is to ask for their prayers and to let them know that the lady has been engaged to a guy of her choosing.

Finally, on the day of the marriage ceremony, women from the groom’s family carry the gifts to the bride’s house in a dance procession. Just on wedding day, the event is held at the bride’s residence.