Stumbled upon the list of top record labels in Nigeria on Nairaland.com but arranged them myself according to their popularity. 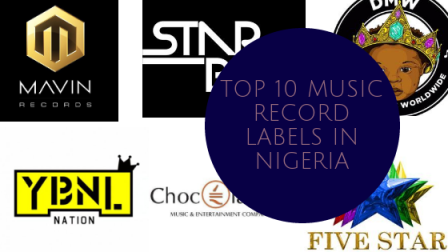 Below are top record labels that are most popular in Nigeria and owned by popular Nigerian artist in the musical industry.

Termed as the hottest Label in the country at the moment. Mavin Records is a revamped record label founded by recording artist and Producer Micheal Collins Ajereh popularly known as Don-Jazzy.

The Label’s inception came to fruition following the closure of now defunct Mo’Hits Records, a record label owned by the afromentioned poducer and D’banj.

The label is home to recording artistes such as Tiwa Savage, Dr Sid, D’Prince, Di’ja, Reekado Banks and Korede Bello.

The label also houses a roaster of producers such as Jazzy himself, Altims and Baby Fresh.
Wande coal was formerly signed to the Label.

As a matter of fact, Mavin records has the biggest single/music by a Label which is Dorrobucci.

Y.B.N.L is one of the hottest and biggest record label in Nigeria at the moment. The fast rising label was founded by Olamide Adedeji popularly known as Olamide a.k.a Badoo.

The Label is home to some of the fast rising act in Nigeria, with the likes of Lil-Kesh, Viktor, and the newly signed duo, Xino and Chinko Ekun. And not forgeting Olamide’s newly born son, Maximilliano Batifeori Adedeji.

But one thing I discoverd is that the Label is lacking in management and Olamide needs to step up his game in evolving the label into a standardize one.

Founded by the duo of Peter and Paul Okoye, popularly known as P_square. The label was founded in 2005 prior to the release of their sophomore album, ‘Get Squared’.

Chocolate City was founded in 2005 by Lawyer Audu Maikori along with Paul Okeugo and Yahaya Maikori.

Generally regarded as one of the most biggest and most successful urban record labels in Africa. Chocolate City Music operates as a subsidiary of Chocolate City group.

MI is currently sitting as vice president and is rumored to be the next president when Maikori steps down.

Chocolate City was the first Nigerian music company to attain a global music award and recognition by the British Council in 2007, International Young Music Entrepreneur of the year (IYMEY) 2007, and they bagged City People award for best record label in 2013 among others.

The Label was founded by Banky W and Segun Demurin. And it is home to recording artistes such as Wellington himself, Shaydee, Niyola and the delectable Dj Xclusive who coupled as the Official Dj of the Label.

On November 10, 2012, the Label released its first compilation album, Empire Mates State of Mind.
Artiste formely signed to the label were Wizkid and Skales.

ALSO READ:  Age of Consent for Different Countries in the World

Skales left due to expiration of his contracts. And Wizkid left the label following the release of his second studio album and expiration of his 5 year contracts, but that doesn’t take away the fact that the Record Label is one of the biggest in the country at the moment.

Triple M-G as it popularly called, was founded by the duo of Iyanya Mbuk a.k.a Iyanya and his manager, Ubi Franklin. It houses artiste like Tekno, Emma Nyra, Selebobo, and Baci.

The label already has an album to its name, titled ‘The Evolution’.

Iyanya, being the lead act is one of the A-list artiste in Nigeria while the trio of Tekno, Emma Nyra and Selebobo have taken the label a step further into success with their music and productions.

Capital Hill is a renowned record label in Nigeria founded by arguably the best director in Nigeria, Clarence Peters. He is partnered by ‘oga boss’ himself, illbliss, with his Gorretti Company. It houses artiste like Tha suspect, Chidinma, Illbliss and Ayoola.

The artiste formely signed to the label was sensational female rapper, Kel. But parted ways with the Label when a misunderstanding arouse between she and Peters.

All the act on this label are force to reckon with in the industry, and the artiste leading the fore-front of the label is non other than Chidinma.

Other top record labels in Nigeria Include

Here is a full list of all music record labels in Nigeria this 2022 that are popular, ranging from Mavin, YBNL, Starboy Records, Banks Music, etc.

Mavin Records started from the popular Mo’ Hits which was founded by the richest Nigerian producer, Don Jazzy and musician, D’Banj.

When they separated in 2011, Don Jazzy went on and established Mavin Records, also known as the Supreme Mavin Dynasty in 2012.

Tiwa Savage is the most popular artistes under this label currently. She is the first lady of Mavin. Other artiste who signed under Mavin include: Iyanya, Di’Ja, Korede Bello, D’Prince, Reekado Banks, Dr Sid, Poe, Johnny Drille and DNA Twins.

The record label was founded in 2002. EME is currently owned by the popular Nigerian musician, Bankole Wellington (Banky W).

The recording artistes at EME studios include Banky W, Shaydee and Niyola. DJ Xclusive still remains the official DJ for this record label.

Popular artistes that have been groomed by EME and are stars in the Nigerian Music industry include Wizkid and Skales.

Some of the popular albums released by EME over the years include:

ALSO READ:  Gokada Office: Location in Lagos & How to Contact Them Easily

I am sure you’ve heard songs by the popular Kiss Daniel, he begins by singing about his record label, G-Worldwide Entertainment.

This record label was established by Festus Ehimare popularly known as Emperor Geezy in 2007. It was until 2011 that the company started promoting musical acts.

G-Worldwide is one of the top labels in the country with its major act, Kiss Daniel winning various awards presently.

Curremtly owned by the one of Nigeria’s most influential pastor, Chris Oyakhilome, this record label discovers, grooms and promote gospel artistes.

It was founded in 2009 and some of the popular gospel musicians belonging to this record label includle: Sinach, Frank Edwards and Joe Praize, Chris Shalom, Ada Ehi, Eben, Buchi and Jahdiel.

Loveworld Records management team is headed by Ehi Moses, a musician and producer with over 15 years experience in the music industry.

Established in the United Kingdom, Kaycee Records is owned and managed by Kennedy Kesidi Richard and Kingsley Chibuzor Aguoru.

Kaycee records have been promoting Nigerian acts in the U.K as far back as 1995. However, in 2010, the company expanded and launched its record label. During this launch, Kaycee Records presented the following artistes: Uche Barry Nwobi (Swith Barry), Ikechukwu Iroegbu (Snappy), Meldaline Maureen Uzoigwe (Mel-Dee), Chike Ken Nwoke (Seaflo), and the group Southend.

Currently, one of the popular artists at Kaycee Records is Safin de Coque, the son of the legendary musician Oliver de Coque. They also have Mr Bistop, a former member of Bracket under this label.

960 Music is another top record label in Nigeria. The headquarters of the label is in Lagos and it is headed by Mark Redguard.

This musical label has several independent record labels under it. These include Hypertek Digital, Aristokrat Records, Ultima Productions and Password.

960 Music was founded in 2013 and it was the first label in the country to have several record labels under its watch.

Some of the popular acts that have been involved with 960 Music include 2Face, Dammy Krane and Burna boy. Also, the legendary musician, Victor Uwaifo was recently signed to 960 Music through one of its subsidiaries, Hypertek Digital.

Capital Hill Records has had several major acts on their label. Some of the past acts include Tha Suspect, rapper Kel.

A few years ago, all the acts on Capitol collaborated to sing a song titled, ‘Finally (Adekunle)’.

Chidinma recently left the record label due to a disagreement in the sharing formula for revenue generation.

The exit of Harrysong from the record label was quite messy as the management of Five Star went after him a couple of times and got him arrested. But all that is behind them as their feud has been resolved amicably and Harrysong has moved on to his own record label, Alterplate.

Recently, Five Star Music signed a young rapper, Xbusta on to their record label and there’s currently much hype around him.

Wizkid is the artiste behind Starboy Records which he established after leaving Empire Mates Entertainment (EME) owned by his mentor, Banky W.

Starboy Records was established in 2013 and some of the acts on this label include producers Maleek Berry and Legendury Beats as well as singer LAX.

Wizkid released his second album titled ‘Ayo’ via his record label. In 2016, Starboy record was enlarged when it added Mr Eazi and Ghanaian acts Efya and R2Bees.

HKN which simply means Honourable Kings of New-School is one of the top record labels in the country.

Recently, Davido founded a new record label, DMW (David Music Worldwide) and he has brought in Dremo and Novemberourkun into the label.

It was founded in 2008 as Alapomeji Records but was rebranded in 2015 to Alapomeji Ancestral Records. This happened at a time when some of the label artistes Seriki, Kayefi and Wise left.

Founded by the legendary musician Fela Kuti, Kalakuta Republic was located in Mushin in Lagos.

However, Kalakuta Republic wasn’t just a record label it comprised a free health clinic amongst other thing.

In 1977, the Republic was burnt down by soldiers which many claimed was in response to the record called, Zombie which Fela had just released at that time. The song referenced soldiers as Zombie and cited corruption and intimidation of communities as the hallmark of the Nigerian military.

Asides, the attack on the building, Fela’s mother was thrown from a window of the second floor. She would later die as a result of this accident.

Edge Records was founded by Ibrahim Okulaja and JahBless in 2005. The first music act to be signed to this label was 9ice. 9ice would later go on to become an instant hit in the Nigerian music scene when he released his first studio album, ‘Certificate.’

The current music acts at Edge Records include Reminisce, Ola Dips and SoJay.

Soul Muzik is an entertainment company based in Nigeria. The company was founded in 2008 and it is owned by the award-winning singer, Dare Art Alade (Darey).

The acts under Soul Muzik include Darey, Zaina Agoro and Mo Eazy. The latest release by this record label is a single titled, ‘Special Fever’ by Darey.

Mo’ Hit was founded in 2004 by the duo of Don Jazzy and D’Banj. The songs releasesd by this label for the years in which they were existed were instant. Some that easily come to mind include Why me, Fall in love and Tongolo which were popular hits by D’banj. The label went on to sign music acts that also become popular. These included the like of Wande Coal, Dr Sid and D Prince.