Since the introduction of the Global System for Mobile Communications (GSM) by the Olusegun Obasanjo administration in 2001, mobile phones have been an ever present in the country. The Nigerian telecommunications market has seen a switch from analogue telephony to digital telephony. This of course has contributed to the rise and popularity of  smartphones in the country against the good old local telephones that graced our homes in yesteryear. 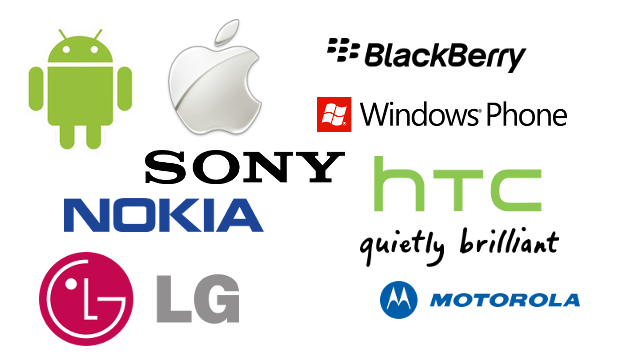 Presently, there are better, faster and sleeker mobile phones around than they were when GSM was first introduced. Many mobile phone makers see Africa and particularly Nigeria as a huge market, so every year, they try to outdo each other by producing better quality phones than their previous inventions to stay ahead of their rivals in business.

Because of the steady improvements in the mobile phones sector, there has been a paradigm shift from the era of Java feature phones to the good old Symbian smartphones way into this era of the smartphones with cutting edge technology to give users the satisfaction and comfort when multitasking.

The steady influx of mobile phones in the Nigerian market has obviously brought about the exercise of choice and preference for one brand over the other and by so doing, Nigerians have taken their stand over the brands that they feel is better and most preferable for them.

In this post, we will intimate you on the top best mobile phone brands that Nigerians love and have come to accept over the years.

Here are the top 10 best mobile phone brands in Nigelria that are popular this 2022:

Over the years, they have been able to stay afloat in the country by developing unique smartphones, of which their Samsung galaxy series is the most popular, with great internal systems and high picture qualities, this is obviously one of the reasons why they stay evergreen in the Nigerian smartphone market.

Samsung smartphones are also affordable for many Nigerians, which is why almost everyone you see has a Samsung phone on them. Their devices are also great for multitasking, a reason most people who love to perform more than one task on a device go for it.

Huawei is the second largest mobile phone maker in the world. It surpassed Apple in 2022 and has been in the Nigerian market for quite some time. Their phones used to be relatively unknown in Nigeria or even when they were known, they used to be very highly unpopular among Nigerians.

However, in recent years, because of their ability to improve, they have produced very unique smartphones that Nigerians are comfortable with and can identify with. One of the popular phones that this Chinese mobile giant has produced which has captured the hearts of many Nigerians is the Huawei Y9, 2022 model.

The phone aesthetics and the unique processor for a mid-range Huawei offering, coupled with their Kirin chipsets packed on a 4 Gigabyte RAM and their dual Artificial intelligence camera which detects various scenery even in low light conditions makes the phone the darling of many Nigerians.

As much as Nigerians love Huawei devices, they should be reminded that since the company has made giant strides in developing 5G technology, it has since been blacklisted by the United States government as it is seen as a security threat and this has limited most top US tech companies that supply mobile hardware and software to Huawei from doing business with them.

Going forward, Huawei phones had till December 2022 to rectify their issue with the United States government or stop receiving mobile software updates for Android after that time-frame although there is a rumoured new Huawei OS that will be called “HongMeng OS” in China and “Oak OS” in other markets in the world, set for release by the fall of December 2022 should the issue with the United States linger.

Apple are the world’s third largest phone maker and the best smartphone maker in the United States. Apple smartphones are very popular the world over and they are purposely targeted at basically the rich. In Nigeria today, Apple ranks as the highest in terms of preference as the iPhone series have bettered its rivals in terms of phone software and hardware.

The picture quality of the iPhone is like none other and in terms of security, Apple phones are very secure. They are the most secure mobile phone brand and Operating System in the world, the second being Google’s Android Operating system.

Most Nigerians love the Apple iPhone as it gives them the confidence and swagger, that feel that comes with having a top notch tech gadget in your hands that surpasses the the feeling of having just about any other device. Apple phones are quality and real value for money.

Tecno has produced several phones that Nigerians can connect to and their Camon series is definitely the phones that gives the company most of the revenue that it generates from mobile phones sale. Tecno Camon series are designed as selfie phones, with very sharp front cameras as well as back cameras that are very well produced to help meet consumer satisfaction.

With the passage of time, Tecno has been able to warm its way into the Nigerian phone market. This was not so in its early years when many Nigerians did not trust the company and saw it as a company that produced counterfeit phones that were produced by the biggest phone companies at that time. Now, the story has changed and the future looks brighter for this tech giant in Nigeria.

The last company but not the least that makes up this top 5 list is definitely Infinix. Many Nigerians love and own Infinix smartphones. This brand, like Tecno, was designed for the average earning Nigerian. One thing most Infinix phones have as a constant is their very sharp cameras.

Infinix Hot series is the most popular smartphone series by Infinix in these parts and consumers have always patronized the company once a new phone in the series is produced as an improvement on the former ones that have been produced over time.

The Xiaomi brand has always produced quality mobile phones with snapdragon chipsets as opposed to other top smartphone brands in Nigeria. They are also a Chinese mobile manufacturing company based in Beijing, China and their Redmi Note 9 pro is just one of their mid-range flagship device that has taken the Nigerian mobile market by storm. They also produce affordable phones with strong battery life and good camera quality. You can visit retail stores to buy their powerbanks, phones, etc.

Oppo is another new mobile phone brand that produces good Android smartphones in Nigeria. Their Reno series is the talk of the town as it was unveiled at the just concluded BBNaija lock down show. This Chinese company has what it takes to compete with other top phone brands in the smartphone market. We are yet to see Nigerians patronise Oppo phones the way they do Tecno, Infinix and even Samsung android devices.

iTel is a low ended popular phone brand targetted at low earning customers who can’t afford other top mobile phone brands. The initiative of the Chinese company, Transsion Holdings in producing iTel phones is to cater for the needs of those that can’t afford the expensive Tecno and Infinix phones but still want durable phones at a cheaper rate. iTel products are one very popular phone brand in the Nigerian mobile market and can still be bought at mobile retail shops around the country.

While Sony might not be a very popular mobile phone brand in Nigeria due to its expensive price, it has ruled the mobile industry for years. Sony is known for making premium android phones, having the sharpest camera lenses than other brands. Xperia is their product and its a very expensive phone.

The Gionee brand has always prided itself as a mobile gaint known to manufacture phones with good battery life. Their m series has always been the selling point for most of their devices. Gionee where the first phone company to produce a smartphone with over 6020mah in battery capacity.

Their phones dominated the mobile market as the Nigerian populace accepted their android devices. Due to lack of maintenance and regular security updates on their Android smartphones, the Gionee brand is really loosing its grip in the Nigerian mobile industry.