The official list of top 10 richest musicians in Nigeria 2022, their net worth in Naira and endorsement deals of these wealthy Nigerian male hip-hop artists is contained in this article. 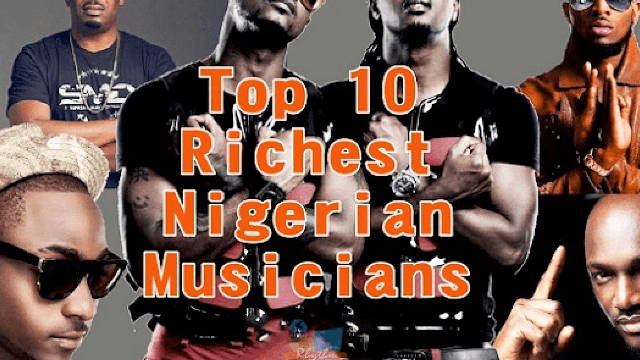 Nigerian musicians are making waves this new year in the music industry and much is being said regarding their wealth.

Apart from their songs, these popular male artistes not only makes cool cash from their hit tracks but also from their shows, endorsement deals and investments. But what is their net worth in Naira? Let’s find out below.

We take a cursory look at the top (10) ten richest musicians in the country today this 2022 and their net worth in Naira, taking into cognizance how these artistes got featured on this list.

Davido is the richest musician in Nigeria at the moment with a net worth estimated at ₦1.7 billion in Naira. His real name is David Adedeji Adeleke. He took the music industry by storm producing interesting songs. He has won series of awards such as the Mobo award, and also emerging the best African Act for the year, beating a field of artists, including Wizkid to get the price.

He is often called OBO, but in 2018 he is known with the popular slang “30 Billion”. Davido recently concluded a 30 billion concert show in which saw the likes of other popular artiste and celebrities in attendance.

Let’s not forgot that Davido is the son of one of the wealthiest men in Nigeria, Deji Adeleke. He also owns his own record label which is worth billions of Naira. He is presently signed with world music giants SONY records, known to sign best musicians in the Nigerian music industry like Tiwa Savage, Tekno and Wizkid.

Davido is a rich celebrity who has mansions, cars and series of investments due to his background. He is also a director in his father’s company. As for his shows, he charges from ₦3 to ₦5 million per show. You hardly see him feature on adverts, so we can’t say if he has any endorsement deals. Davido’s net worth in Naira stands at an estimated ₦1.7 billion.

Davido recently showed his father’s private jet which cost him ₦9.7billion. He also bought a ₦45 million car for his current girl friend, Chioma. Davido got an endorsement from infinix worthy over ₦350 million while Chioma got hers for ₦150 million too.

Most would ask, who is richer between Davido and Wizkid or does Starboy has more money than Davido? You should know that both are wealthy but Davido might just be richer than Wizkid.

He is undoubtedly the second richest artiste in Nigeria by wikipedia this year. Wizkid’s real name is Ayodeji Ibrahim Balogun was recently ranked by Forbes among the richest celebrities in Africa in 2022.

ALSO READ:  Olamide & Phyno: Who Is the Richest and Better Rapper 2022?

Wizkid is the founder and CEO of Starboy music record label. He is an award-winning act who is recognized not only in Nigeria but internationally. His hit songs continue to top the musical billboard chart and have recorded financial success in the musical industry.

Some of the endorsement deals which Wizkid signed that worth millions of Naira and helped him rack up enough wealth are: Being an ambassador for Pepsi, Globacom (top telecom company in Nigeria), MTN deal worth N40 million.

Wizkid has cars, mansions in various countries plus other investment, businesses and assets. He charges 5 million Naira per show and has an estimated net worth of ₦970 million according to Forbes in Naira.

Don Jazzy, is Nigeria’s wealthiest record producer and CEO of Mavin Records. He co-founded Mo’ Hits Records in 2004 which saw the likes of super stars D’Banj, Wande coal etc excel under him. Under his new record label, he has produced a lot of songs and also talents in the Nigerian music industry. Among which the likes of Tiwa savage, Korede Bello, Reekado Banks e.t.c have prospered under.

Don Jazzy real name is Michael Collins Ajereh. He is reported to charge about ₦500,000 or more to produce a song which explains how he makes his money. He has signed various endorsement deals that worth millions of Naira.

Don Jazzy also lives in his own mansion and has numerous cars which explains his rich life-style. He is not yet married as of writing this post and his estimated financial worth is estimated at about ₦900 million in Naira.

One of the best male singers in the country at the moment is 2face whose real name is Innocent Ujah Idibia. He was part of the defunct plantashun boiz and had been the richest musician in Nigeria and Africa for so many years before the likes of youngest artiste Davido and Wizkid usurped his position.

The music legend has produced hit tracks which has sold internationally and has topped the charts. African Queen still remains his best song so far as it is still in vogue since its release. 2baba is married to Annie Idibia and has other women outside wedlock who have children for him.

Apart from being a singer-songwriter, record producer, investment wise, he is an entrepreneur. He also has endorsement deals with top organizations in the country which runs in millions. It is rumored that 2Baba charges about ₦2.5 million naira per show. His worth is said to at an estimated sum of $22 million which makes him one of the top ten richest musicians in Nigeria.

Olamide Adedeji known by his stage name Badhoo or Olamide is another wealthy Nigerian male rapper and musician and the founder and CEO of popular music record label in Nigeria – YBNL Nation. As for this 2022, he is known to be the richest Nigerian rapper.

ALSO READ:  Wizkid and Olamide: Who is Richer in 2022? See Answer

Apart from making money through his music which have he sold over 40 million copies worldwide. He makes most of his cash from his collaborations with other musicians and his record label signees and event organization. Olamide is also a brand ambassador and a businessman who has invested heavily in Lagos state.

Olamide signed an endorsement deal with Ciroc worth ₦30 Million. Other deals that he signed include being a brand ambassadors for Guinness worth N80Million, Etisalat deal worth around ₦50 Million which has since being renewed with an additional ₦30 million Naira.

It is said that Olamide net worth in dollars in $6 million as of 2017 but his current financial status shows that he is more than that figure. Apart from the two filling stations and landed properties he has around the country, Olamide charges between ₦2 million to ₦4 million per show.

The sixth richest Nigerian musician in the country is no other person than Phyno. His real name is Azubuike Nelson Chibuzor. He is the current second best rapper in the country who raps and sings in Igbo and English language fluently.

Apart from winning series of awards, Phyno has made a name for himself in the music industry as a top artiste and celebrity. He is built a brand for himself through his songs which sets him apart from other rappers. Phyno rich life style can be seen in his assets and financial worth.

Just like Olamide, Phyno also invested his wealth into fashion, real estate, etc. It is said that the duo can’t be matched in what they do as they have taken the entertainment market by storm by the way they perform on stage. Phyno charges about ₦2 to 3 million Naira for shows and his net worth is estimated to be ₦755 million in Naira.

P-Square are still ranked one of the richest musicians in the country this 2022 even if they split. For those who don’t know about them, here is a brief profile on Nigeria’s most celebrated twins who took the Nigerian music industry to another level since their emergence.

Peter Okoye and Paul Okoye are twin brothers who sang and danced together from the onset before Paul decided to stop dancing and concentrate more on singing. Peter on the other hand choose to do both. They produced and released their albums through Square Records which was managed by their elder brother, Jude Engees.

It was until recently that they both split after some internal family issues and divided their properties among themselves which led to the dissolution of P-square to the abasement of their fans. While they were together, they signed a record deal with Akon’s Konvict Muzik label.

It was said that P-Square charges a whopping N8 Million Naira per show. There was once a time they were first on the list. They made real cash and won series of awards. Forbes ranked them among the ten richest musician in a in 2014, 2015, and 2016 as the richest twins in Africa.

Apart from singing and dancing at shows, they have other investments which are not made public. It is rumored that both brothers have about 7 cars between them, mansions and even landed properties around the country and were worth about ₦700 million in Naira when they were together which made these richest Nigerian musicians plus other endorsements benefits.

This year, Tuface is richer musician than P-square. But, P-square are richer than D’banj even though they split.

His names are Inetimi Alfred Odon is called by his stage name, Timaya. He is a Nigerian singer and songwriter and owns a record label called the South South hip hop group, Dem Mama Soldiers.

Timaya began his career in 2005 and has since became one of the most respected artiste in the entertainment industry. His second album Gift and Grace was released in 2008 which sold about 10 million copies in Africa.

We know that he should have investments even though its not listed as his net worth in Naira is estimated at ₦690 million. For the record, Wizkid and Tuface are richer musicians than Timaya.

He started his musical career as a drummer for a local church in Enugu State. He also is a popular musician in Nigeria. The singer is valued at an estimated net worth of ₦500 million Naira. He has many investments in the south eastern part of Nigeria.

Flavour is not yet married but has children by different women, who are regarded as his baby mama’s. This richest musician in the country is also a model due to his physique.

D’banj real name is Oladapo Daniel Oyebanjo, but he is known by his stage name D’banj. He is another richest Nigerian musician who has made wealth from his musical career and other investments. He has also signed top endorsement deals which have fetched him money in recent years.

He was formerly a co-founder of MO’ Hits record label with Don Jazzy before their split up. As a singer-songwriter, entrepreneur and television personality, Dapo has evolved into an international act.

Although he is not as pronounced as he was before, he managed to make it to our list of richest Nigerian musicians in the country for 2022.

He is valued at  ₦400 million Naira recently which makes him one of the richest musician in Nigeria 2022 according to Wikipedia sources.

Naira Marley makes up our list of  rich Nigerian music artist. He has a large fan base and is currently trending even among youths. His fans “Marlians” as they are popularly called are mostly found online singing his praises. Naira Marley is also a music producer, rapper, song writer etc. He has featured the likes of Olamide, Falz, Slimcase, Lil Kesh and Simi in his music.

Naira Marley net worth is estimated at ₦150 million and he has many endorsements to his name. He also own a record label named “Marlian Records”.

What are your thoughts on our top 10 richest Nigerian musician this 2022 and their net worth in Naira? Use the comment section to air your thoughts.