“Touch not my anointed and do no harm” says the Holy Bible. Men of God are men of honour, virtue and respect, for they carry the anointing of the Lord. They are the reflectors of God’s grace, love,mercy, holiness and righteousness. 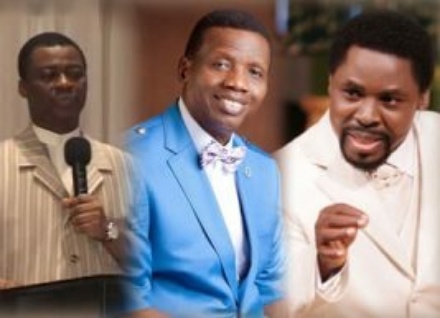 Throughout the whole world, great men of God such as Benny Hinn, Reinhard Bonnke, are known to have influenced Christianity and the world at large through their ministries, signs and wonders. Due to the rise of various churches in Nigeria, there are numerous pastors in the country that operates with divine powers, they heal the sick and perform miracles in the name of Jesus.

In Nigeria today, we know that there are powerful pastors who perform healing miracles, cast out demons, gives prophecies that comes to pass. Apart from being popular, these men are highly respected and influential in the society.

It is no surprise that Nigeria is the most religious country in Africa and infact one of the top 10 in the world. In this write-up, we shall be listing the 10 strong and most powerful men of God based on the miracles God has done through them, base on the magnitude of inspiration people acquires from their sermon and doctrine and finally, based on their popular lifestyle that the world can see.

Top 10 Most Powerful Men of God in Nigeria

Pastor Enoch Adejayan Adeboye popularly known as E.A Adeboye is one of the most respected man of God in the country. Born 2nd, November 1942 at ifewara in Osun state, he came from a humble background. He is known to be a very powerful teacher of the gospel who is capable of healing the sick, reviving of spiritual lives of individuals that seems dead, restoring lost glory; all these through the name of Jesus.

He became the General Overseer of the Redeem Christian Church of God(RCCG) in 1981 after the demise of the founder- papa Akindayomi. His church has grown to be one of the biggest pentecostal churches in Nigeria today. Ever since becoming the General Overseer, his anointing has always moved from one point to another point of spiritual greatness.

A man with the vision of bringing Christ to every doorstep throughout the whole world, a man whose preaching is filled with inspiration and spiritual impact, he oversees over 14,000 branches in Nigeria. It’s worthy to know that EA Adeboye was once a professor of Mathematics before God called him.

Rev Fr Ejike Mbaka is a popular powerful catholic priest in the country known for prophesy and real miracles. One of such prophecies he made was the victory of Buhari as president of Nigeria after other popular pastors said Goodluck Jonathan would win.

He runs the biggest catholic ministry in Nigeria. He is the current parish priest of Christ The King Parish in Enugu state and the Spiritual Director of Adoration Ministries, Enugu, Nigeria. Known for his dynamic healing powers through the Holy Eucharist, he has impacted in the lives of many across the globe. The kind of crowd this man of God pulls says it all as his name rings a bell among Catholic faithful especially people residing in the eastern part of Nigeria where his ministry is domiciled.

His weekly adoration program which holds every Wednesday from 7pm till dawn, draws multitudes of crowd and it’s always replete of miracles, testimonies, signs and wonders. In Enugu, his bottle water Aqua Rapha is the only sachet and table water patronized by residents of the coal city because of its healing abilities.

His ministry also caters for thousands of followers and has rewarded scholarships to many. In Nigeria, Rev Fr Ejike Mbaka is touted as the most powerful of all catholic priests and the only priest who runs a ministry of such magnitude. He is also a gospel act and has written several prayer books.

Born in 1941 in Erin-ijesha, Osun state. He is the founder of Deeper Life Bible Church which he created in 1989. He is a renowned man of God with a great approach towards preaching the gospel of Jesus Christ.

He is one pastor that many youth pastors take as a model. It is worth noting that W.F Kumuyi was an education lecturer at the prestigious University of Lagos before answering God’s call.

He is founder and General Overseer of Faith Tabernacle, located in Ota, Ogun state. David Oyedepo is the richest pastor in Africa and in Nigeria. He is also the owner of Covenant University, one of the best private universities in the country.

Born in 1954 in Omu-aran, Kwara state. Faith tabernacle was adjudged as the world’s largest church auditorium in 2015 by Guinness book of record. His church is also one of the most influential in the country as he is highly respected.

A man whose spiritual life is never in doubt, it is important to know that Bishop David Oyedepo was ordained by God through pastor E. A ADEBOYE to become a man of God in 1983.

Although dead, one of Nigeria’s pastors that did extraordinary miracles during his lifetime was the Late Prophet T.B. Joshua who is the General Overseer of The Synagogue, Church Of All Nations (SCOAN).

Born on November 12th 1963 in Ondo State, Nigeria, according to his church’s’ website, T.B. Joshua’s journey to prophethood is a humbling story of how God raised a young man from a poverty-stricken home to lead an international ministry that would attract thousands worldwide to witness the reality of God’s power today.

He dropped out of secondary school in his first year to work in a poultry farm. Most people have asked how T.B. Joshua got his powers? It was said that he performed a forty day fast where he received his divine call to start up a ministry with a eight members.

He was known to have made many prophecies and has healed thousands of people from their illnesses. No wonder he is a mentor to presidents and heads of states of various countries round the world. He died on the 5th of November, 2022.

He is one of the oldest men of God in Nigeria. Born on the 16th of November 1935 in aradagun, Badagry Lagos state.

He became the General Overseer of Gospel Faith Mission International(GOFAMINT) in 1963.

He may not be that popular like the rest on this list, but he is one of the most powerful pastors doing great things for God’s Kingdom. He is a role model to many.

Rev. Fr. Emmanuel Obimma popularly known as (Ebube Muonso), is also one of the powerful Catholic priest that performs miracles just like Reverend Father Ejike Mbaka. He is the spiritual director of HOLY GHOST ADORATION MINISTRY UKE IN ANAMBRA state. He is a very popular powerful man of God whose ministration is always known for signs and wonders.

His adoration ground located in Anambra state is always besieged with mammoth crowd each time he holds a crusade. He has written over a dozen powerful prayer books. He is an ordained catholic priest from Onitsha Archdiocese. He is the parish vicar at St Charles Borromeo Catholic Church Odume Obosi. He is one catholic priest people rush to for miracles.

He is one of the popular richest pastors in Nigeria that is known for healing miracles. Born on 7th November, 1961, he founded Christ Embassy which now have branches not only in the country but even beyond.

He is popularly known for his accent, appearance and knowledge of the word of God.

He is man of God who have written more than 70 inspirational and devotional books and is rumored to own a private jet.

A renowned motivational speaker, Pastor Sam Adeyemi is also one of the respected men of God of our time. His sermons are known to uplift people spiritually. He’s the General Overseer of Daystar Gospel Church.

Ashimolowo was a Muslim before he got converted to Christianity at the age of 20 by enrolling in a Bible school. This was after the death of his father.

According to Forbes, Ashimolowo’s net worth is estimated between $6-10 million. He is among the richest pastors in the world and a very influential man of God in the country. He is the founder and Senior Pastor of Kingsway International Christian Centre (KICC) in London.

While we don’t doubt these powerful pastors and preachers, we know that most men of God in the country get their powers through dubious means especially joining secret societies and occult groups in a bid to make money. No matter what, the main message of Christianity is Christ. We urge followers to remain steadfast in their faith in the Lord and keep watch as to discern who is a real or fake man of God.