Nigeria is a sporting country that loves football. In fact, soccer is the only game that can and has united this nation for a very long time. 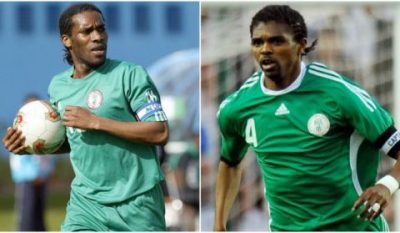 Blessed with talented footballers, Nigeria through the national football team, the Super Eagles has won the African cup of Nations (AFCON) trophy three times in her history and is still feared across the continent.

Currently ranked third best footballing nation in Africa, Nigeria has lived up to its bidding as a country in Africa that loves football.

No wonder we have talented footballers who have made their mark in the game and have been put among the best soccer players of all time.

In this write up, you get to know the top 10 greatest talented Nigerian football players of all the time.

He is a popular talented Nigerian soccer star that is also known as Kanu or Papilo. Although retired, Nwankwo Kanu was a footballer in Nigeria known for his ability to dribble and even score goals.
Born 1st of February, 1976, Kanu hails from Abia state. His position on the field of play when he was active in sports was either as a winger or main striker in the forward position.

He is one of the few Nigerian footballers that had a successful career, featuring for the likes of Iwuanyanwu Nationale, Ajax, Inter Milan and top English club side, Arsenal, West Bromwich Albion and Portsmouth. He is among the few Nigerian soccer players who have two African Player of the Year awards amongst others.

Kanu Nwankwo isn’t only regarded as one Nigeria’s greatest footballers but one of the best players in African football history.

Jay Jay Okocha is another famous Nigerian talented footballer considered to be among the greatest player of all time due to his mesmerizing football skills.

When he was still active on the pitch, he played as an attacking midfielder and was known for his creativity. It was even said that Ronadinho, one of Brazil’s and Barcelona’s best dribblers learnt from Okocha while the duo were at PSG.

Okocha was so confident with the ball that his technique and dribbling skills, especially the step-over was popularized during his playing days. There was a match in which he dribbled past Germany’s best keeper, Oliver Khann in a way that would never be forgotten in football history.

Jay-Jay has played for PSG in France, Bolton Wanderers in England and Fenerbahçe. Although he is very respected as a football legend in Africa, he has never won the Africa’s best player award in his life which has sparked so many controversies.

Sunday Oliseh was another talented defensive midfielder who caught the eyes of Nigerians during his playing career. He had what most footballers would call “shot power”.

Oliseh played for the Super Eagles and a host of top European clubs such as Ajax, Borussia Dortmund and Italian champions, Juventus F.C.

He is fondly remembered for being the player who scored the winning goal in the group stage match against Spain during6 the 1998 World Cup, as Nigeria won that game 3–2.

The late Rashidi Yekini played as a striker and was regarded by soccer fans as one of the greatest Nigerian footballer in history during his time as a footballer.

He played for the senior team and also Vitória de Setúbal in Portugal. Yekini represented Nigeria in five major tournaments, scoring a total of 37 goals for the Super Eagles.

He won the African Footballer of the Year award in 1993 scoring the country’s first-ever goal in the competition. He had an eye for goal as his long legs gave him advantage when he shoots with his foot.

His professional career had a lot of highs and lows as it hit rock bottom when he featured for Olympiacos FC, Sporting de Gijón, FC Zürich, Club Athlétique Bizertin and Al-Shabab Riyadh.

Segun Odegbami, now a football TV analyst is another highly rated retired Nigerian footballer that features on our list of greatest footballers in the Nigeria’s history.

During his time, he was among the historical team that guided Nigeria to her first Africa Cup of Nations title in 1980. He played as a forward, scoring 23 goals for the senior team in 46 caps.

At club level, he played for IICC Shooting Stars of Ibadan from 1970 to 1984. His exploits on the football pitch has seen him enter the books of one of Africa’s best soccer players.

The great Stephen Okechukwu Keshi was another Nigerian football defender known to have guided Nigeria to her victory in the Africa’s Nations cup tournament as both player and as a coach of the Super Eagles.

Keshi featured in the 1994 FIFA World Cup as a defender and captained the National team in the 1994 Africa Cup of Nations. He also had a successful club career.

The late Stephen Keshi played 60 times for the country making him the nation’s second-most capped player at the time of his retirement.

ALSO READ:  Baseball in Nigeria: All You Need Know

Emmanuel Amunike played as a winger for the Super Eagles and was a great dribbler who possessed skills that made it easy for him get past opponents. He played as a forward for the Nigerian senior team at the 1994 World Cup.

Amunike was however unlucky as his football career was cut short by a serious knee injury when he played for Spanish giants, FC Barcelona. His transfer fee to the club was $3.6 million as at that time.

Finidi George was a popular Nigerian footballer who played in the position of right winger during his time. He is also regarded by many as one of the greatest Nigerian football players in history.

He made a name for himself at Ajax football club in the Netherlands where he won eight major league titles and the Champions League in 1985.

Finidi featured in two World Cups and is fondly remembered for his goal celebration in the 1994 World Cup against Greece.

Christian Chukwu Okoro was the first Nigerian captain to win the African Nations Cup trophy during 1980 tournament where Nigeria defeated Algeria 3-0 in the finals.

Last on our list of all time greatest footballers in Nigeria is Mudashiru Lawal popularly known as “Muda”. Lawal played as a midfielder for his club and for the Super Eagles.

He was a mechanic before he diversified into soccer. He was among the Nigerian team that won the first AFCON and was known for his creativity and passing technique.