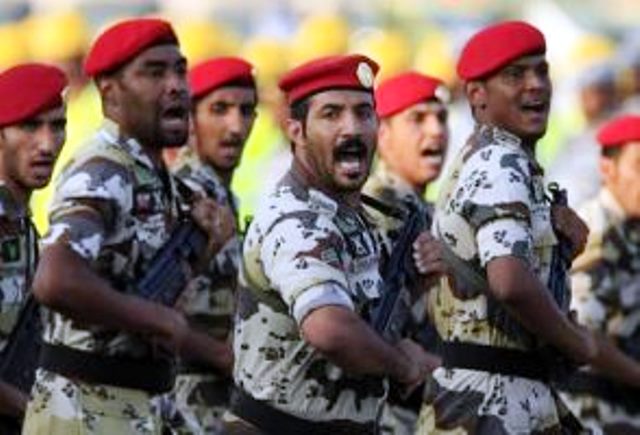 The Middle East is composed of mainly Arabic speaking countries concentrated around the same region in Asia, some Parts of Africa, precisely North Africa, and Israel.

Over the years, the military might of some of the countries which stem from that region has grown considerably from strength to strength and this has made some armies more powerful than the others in the region.

For some time now, The Middle East and North Africa have been seen as a volatile region globally, this is so because of the violence that goes on in that region, and due to this instability, the Institute for Economics and Peace ranks it the most violent region in its annual Global Peace Index.

It is not surprising though that the Middle East is ranked the most violent region on earth since the civil wars in Iraq, Libya, Syria and Yemen, the insurgency in Egypt’s Sinai Peninsula, the Israeli-Palestinian clashes, and the tensions in Iran and Saudi Arabia.

When ranking the military might of countries, money is not the only thing taken into cognisance. Other factors such as the quality and quantity of weaponry and training are also very important points to note. Important also are the number of soldiers, naval staff and Air force personnel that can be called upon during the case of an emergency.

The defence forces of any country require their land power, sea power and air power to be very strong and these three work in tandem to defend their sovereignty as well as their territorial waters and borders.

Apart from money, arsenal and military personnel, The Global Firepower (GFP) index weighs up more than 50 other factors, which includes not just the quantity of weapons alone but the range of these weapons, the abilities of the local defence industry, etc. in order to come up with its rankings of the most effective defence forces in the world.

The Global Firepower Index uses lower scores to grade the best militaries on earth. Theoretically, a perfect score of 0.0000 is the best ever, and since no country has attained that, the closest any country comes to that score is the United States, which tops the rankings with a score of 0.0857.

Inside the Middle East, Mauritania is by far the least strongest military by some distance, with a score of 4.2664 which is the fourth worst out of the 130 countries ranked globally.

Further up the rankings, but still not high enough to make the cut for the regional top ten despite huge investments in recent years, is Qatar, with a score of 1.8943. Also missing out from the best defence forces in the Middle East is Jordan, whose armed forces have often been thought of as among the most capable in the region. It is ranked at 13 in the Middle East and North African (MENA) region, with a score of 1.2024.

With that explained, below are the Top 10 Finest Defence Forces in the Middle East in 2022, in their pecking order.

Turkey is ranked by Global Firepower as the best in the MENA region with a score of 0.2491. The country’s military is very strong and active and it also has important overseas military ties with Qatar and Somalia, basing troops in both countries.

Turkey is not only the most powerful defence force in the MENA region, but the eighth strongest in the world, just ahead of Germany and one place below Japan.

Egypt are currently ranked second in the Middle East and the country in the midst of an equipment recapitalization programme, with new fighter aircraft, attack helicopters and surface-to-air missiles all being bought in.

Global Firepower ranks Egypt with a score of 0.2676, which makes it not only the second best military force in the MENA region but tenth strongest in the world, ahead of the likes of Italy and Pakistan.

Third on the list is the State of Israel. With numerous hostile neighbours around this country, Israel has always moved to make sure that they are two steps ahead of their enemies in making sure that they are well strengthened to face and possibly defeat anything they come up against in battle.

The Israel Defence Forces are the best equipped, best trained and most capable of any in the region according to the International Institute for Strategic Studies, IISS, this is due to the massive support being offered by their close ally, the United States.

Israel’s Global Firepower Index score in 2018 is 0.3476, thus making it rank third on this list and the sixteenth best military force in the world.

Iran’s military is the largest in the region in terms of the number of active personnel. There are 350,000 military personnel in the army, 18,000 in the navy, 30,000 serving in the air force and a further 125,000 in the Islamic Revolutionary Guards Corp (IRGC).

Iran’s Global Firepower Index score of 0.3933 puts it ahead of any of its immediate neighbours.

Saudi Arabia has a Global Firepower Index score of 0.4302 and this puts it rightly in fifth position of the best military in the region despite having more money than any of the other countries in the region to spend.

Algeria has the best equipped defence forces in North Africa and this is due to its backing from Russia and China. The Global Firepower Index score for Algeria’s military is 0.4366, making it the sixth best in the MENA region and the twenty-third best in the world.

According to the International Institute of Strategic Studies, IISS, Syria’s active military personnel currently include the some 105,000 serving members in the army, but the army is short of personnel, leading to increased efforts at conscription, which many do their best to avoid.

Allied militias fighting alongside conventional forces have played an important role in helping to strengthen the military of Syria. Much is not known of the 2017 budget of Syria’s military and the Global Firepower Index index score of 0.7603 makes Syria the seventh strongest military force in the Middle East.

Morocco has the fifth largest armed forces in the region, with an active personnel of 195,000 in the military. Her Global Firepower Index score stands at 0.8702, leaving the country eighth on this list.

Iraq has the second highest known budget of any country in the region, a very long way behind Saudi Arabia in terms of military budget. With a military personnel of 64,000, just a thousand less than that of the United Arab Emirates on this list, they have been helped greatly by assistance from the United States and other Western powers, as well as military advice from Iran’s Al Quds brigade. Iraq’s Global Firepower Index score stands at 0.8961.

The United Arab Emirates has the smallest defence force in terms of military personnel on this list and with a Global Firepower Index score of 0.9087, the UAE ranks 10th on this list but is well ahead of the likes of Bahrain, Kuwait, Oman and Qatar.

They UAE defence forces have gained valuable front-line experience in Afghanistan, Libya and Yemen in recent years and the country’s special forces impressed many observers with their amphibious assault to capture the Yemeni port city of Aden in May 2015.

Her military budget is unknown.