Tony Onyemaechi Elumelu was born on 22nd of February, 1963. He is among the top 10 richest entrepreneurs in Nigeria with a net worth estimated at $1 billion this 2023 according to Forbes’ rich list.

Elumelu is a businessman by occupation, philanthropist, and a role model to most youths in Nigeria and Africa, using his foundation to enrich and train young people to be better people of society.

When the name Tony Elumelu is called, it means a lot to a lot of people. To some, they know him as the man that led a team that turned a one-country bank into a Pan-African Bank, to others what comes to mind is the Tony Elumelu Foundation that is centered on promoting and celebrating entrepreneurship and excellence in business across the African continent. 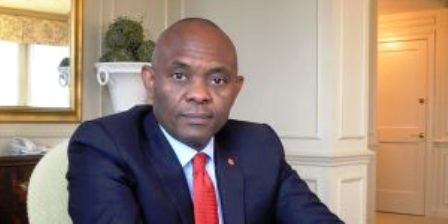 To me, Tony Elumelu is the man who made $123 million in 3 weeks. This was between February 1 to February 21, 2013. Enough of this, who is Tony? He is a businessman, a philanthropist and the chairman of the United Bank for Africa, Heirs Holdings, Transcorp and the founder of the Tony Elumelu foundation.

Tony Elumelu hails from Delta State, Onicha-Ukwu in Aniocha North Local Government Area precisely. However, he was born in Jos, Plateau State. Mr Tony Elumelu has four siblings of which Ndudi Elumelu, a Nigerian politician is among.

Tony Elumelu got his bachelor’s degree from Ambrose Alli University and proceeded to the University of Lagos where he got his master degree and then, attended the Harvard Business School.

He is married to Dr. Awele Vivian Elumelu, a medical doctor and with her, they were blessed with four children of which all are females.

While he must have had a lot going on for him, his rise to fame came when he acquired and turned Standard Trust Bank into a top player in the Nigerian banking industry. He did not stop there. In 2005, he led a group of investors that led a merger and brought about the United Bank for Africa which had grown so big and have branches in over 20 African countries and also in the United States of America and the United Kingdom.

Aside this, he founded Heirs Holding after he retired from UBA in 2010. He also has other businesses including landed properties.

Aside being a successful businessman, Tony Elumelu is a well-known philanthropist. He is the founder of the Tony Elumelu Foundation, a non-profit organization centered on promoting and celebrating entrepreneurship and excellence in business across the African continent.

One of the pet-project of which he is known for is the Tony Elumelu Entrepreneurship Programme. He is also involved in other non-profits works. Some of these includes him being a member of the World Economic Forum’s Regional Agenda Council on Africa at a time.

He is also a fellow of the Nigeria Leadership Initiative, he is a trustee of the Infant Jesus Academy in Delta State, he was a member of the Bretton Woods Committee and also involved with the Tony Blair Africa Governance initiative through his foundations.

Just like other great men and women who had excelled in their chosen career, Tony Elumelu had received numerous honors and awards. There’s no denial, he deserves all the awards and even much more than all he got. Some of his awards includes;

Needless to say, Tony Elumelu is a wealthy man. He had made fortune not only for himself, but his family at large.

He has businesses and properties that brings him money always. As at 2015, Mr. Tony Elumelu was worth $700 million. Currently, his estimated worth is put at $1 billion this 2023.