The Vatican city state is the smallest sovereign state in the world and the territorial seat of the Papacy. It embraces an area of 108.7 acres and is located on one of the original seven hills of Rome, where it is now completely surrounded by the City of Rome. From here, the Pope administers to more than 600,000,000 Catholics spread throughout the World. 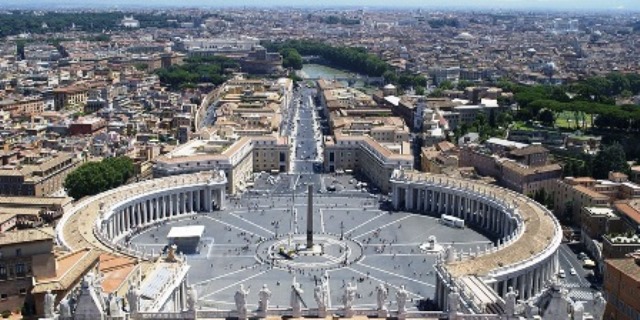 About half of the area comprises the Vatican Gardens, while the rest contains the Vatican Palace where the Pope resides, St. Peter’s Basilica, museums, art galleries, a radio station, stores and ofiices, and apartments for over 1,000 permanent residents. Most of these residents are priests and religious in Vatican service; the rest are engaged in secretarial, domestic, trade, and service occupations.

In addition to Vatican City proper, the extra-territorial rights of the Vatican extend to thirteen buildings in Rome, including the major basilicas and office buildings of various Congregations of the Roman Curia, and to the Villa of Castel Gandolfo, fifteen miles southeast of Rome, which is the summer home of the Pope.

The government of Vatican City is in the hands of the Pope, who entrusts its functions to the Pontifical Commission, which he appoints. The Vatican has a Secretary of State and maintains diplomatic relations with other nations, and most nations are, in turn, represented at the Papal Court.

The Vatican maintains its own armed forces, which consists of two professional and three honorary bodies. One of these is the famous Swiss Guards, which dates back to 1506. Members of the Guard are all of noble descent. They are Catholics with a height of 5 feet‘ 11 inches or more, bachelors, and they are accepted between the ages of eighteen and twenty-five. They are eligible for pensions after ten years. It is practically a hereditary occupation, as the same families are represented through the years.

The Guards dress in colorful Renaissance uniforms reputedly designed by Michelangelo. Their duties are to protect the personal safety of the Pope and to guard the main gates of the Vatican. The Papal Gendarmes are the official police of Vatican City. Serving as attendants in the Papal chambers and on civil occasions are the Noble Guards, Palat1ne Guards, and Gentlemen of his Holiness.

The Basilica of St. Peter’s

St. Peter’s Church is the largest and greatest church in Christendom. The area on which the Church stands was originally a cemetery; it was the burial place of St. Peter and many of the early Popes and martyrs. The Roman Emperor Constantine first erected a basilica over St. Peter’s tomb in the Fourth Century, and a succession of Popes added to it. When the Church fell into decay, a new Church of St. Peter’s was conceived by Pope Nicholas V (1447-1455), and building began under Pope Julius II in 1506. The work was continued under a succession of Popes, and the Church was finally dedicated one hundred twenty years later by Pope Urban VIII in 1626.

St. Peter’s Church is 694 feet long, and its transepts are 451 feet wide. The summit of the dome is 435 feet from the ground, and the dome’s diameter is 138 feet. The whole building comprises an area of 163,182 square feet. The first architect was Leon Alberti, and he was followed by G. da Sangallo, Bramonte, and A. da Sangallo. Michelangelo was also one of the chief architects and designed the dome. Raphael was involved in the architecture and also painted the tremendous murals that decorate the Borgia Apartments and the Lodge. Another important contributor was Bernini, who executed the bronze canopy and high altar in St. Peter’s Church, and also the colonnades surrounding the great piazza in front of the Church.

The Sistine Chapel and Choir

The exquisite Sistine Chapel is renowned no less for its choir than for its paintings. It was built by Pope Sixtus IV in 1477, and Raphael, Michelangelo, and other famous artists contributed to its decorations. A vast fresco of Michelangelo, which covers the vaulted ceiling, is undoubtedly the most famous painting in the world. Working while lying on his back on the high scaffolding, it took him four years to complete.

It is in the Sistine Chapel that the College of Cardinals gather from all parts of the world to elect a new Pope ‘upon the death of the reigning one. They remain “locked up” until a new Pope is elected. One of the shortest elections was that of John Paul I, which was completed on the first day of balloting. The longest occurred in 1268, when it took the Cardinals two years, nine months, and two days before naming Pope Gregory X.

Beautiful formal gardens form about half of Vatican City. They are situated on the highest point of Vatican City and look down on a portion of the city of Rome. During the years 1870 to 1929, the Popes, as “Prisoners of the Vatican,” confined their outside walks entirely to this area.

Consequently, the various Popes showed an interest in gardening by helping lay out the flower gardens, the fountains, and the irrigation system which keeps the gardens almost perpetually green. The garden is a perfect place for viewing the dome of St. Peter’s Church.

Treasures of The Vatican

The Vatican is undoubtedly the richest depository in the world of art, antiquities, books, and statues. From the year 1367, Vatican City was the regular palace and residence of the Popes, who one after the other gradually enriched it. In an age when all the world was Catholic, the great artists flocked to Rome to contribute to the Church’s glory

The Vatican Palace is the home of the Pope. and it alone contains about 10,000 rooms and 1,000 staircases. The Vatican Library dates back 1,500 years; it contains over 70,000 manuscripts and 7,500 incunabula, and also more contemporary books. The Vatican is filled with priceless statues found beneath the ruins of ancient Rome, some 70,000 of which were excavated. The Museums are filled with masterpieces of Raphael, Michelangelo, Botticelli, Ghirlandaio, Montegna, Perugino, Fra Angelo, and untold others of every age. There are medals, curios, and antiquities of every description.

Almost half the area of Vatican City contains three and four-story buildings, which are packed with invaluable treasures of classical antiquities of Greek, Egyptian, and Etruscan origin. Much of this material is available to serious students and scholars, who come here from all over the world to study.

Pope Pius XII began the updating of the Vatican Library and installed a modern reference system. Most of the important items in the Library have been micro-filmed for the Pius XII Memorial Library at St. Louis University, St. Louis, Missouri. At the special request of Cardinal Spellman of New York, the Pope permitted Michelangelo’s statue, the Pieta, to be shipped to New York for exhibition in the Catholic Pavilion at the New York City’s World’s Fair in 1965, where millions of people were able to view it.

This text was culled from the New American Bible (NAB)