In this article, we’ll take a gander at Taraba state in Nigeria. The local government areas in the state and the notable towns in it will all make up this write-up. 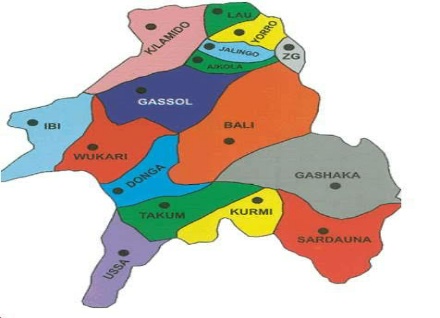 Taraba is one of the thirty-six states in Nigeria. The State came to existence when it was carved out of the former Gongola State on 27th November 1991. This was made by the then regime of General Ibrahim Babangida. The state is named after the Taraba River which traverses the southern part of the state. Taraba State has it capital in Jalingo, a notable and developed city in the state.

Taraba State occupies an area of 54,473 squarekilometers, and it’s situated in the North Eastern part of the country. Taraba state shares common boundary in the West with Plateau, Nassarawa and Benue states, on the eastern border by Adamawa state and the Republic of Cameroon, and on the northern border by Gombe state.  The state is made of many ethnic groups, with Fulfide being one of the prominent tribes.

List of Local Government Areas and Towns in Taraba State

Taraba state has sixteen (16) Local Government Areas (or LGAs). They are as follows:

Ardo Kola LGA is one of Taraba State local government areas. It has an headquarter in Sunkani town, where all the administration of the area is done. The list of notable urban areas in Ardo Kola LGA include the following: Iware, Jauro, Yinu, Lamido, Borno, Novembero Ranewo, Sarkin Dutshe, Sunkani, Tau and Zongon Kombi towns.

Bali LGA of Taraba State is one of the known Local Government Areas in the state. With an administrative headquarters in Bali town, there are many other urban areas and districts in the area. They include the following: Bali, Badokoshi, Gang Dole, Gang Mata, Ganglari, Gangtiba, Suntai, Takalafiya, Kaigama and Maihula.

Donga LGA is a Local Government Area in Taraba State. It has an administrative headquarter in the town of Donga, where the area got it name from. Notable urban Akate, Fada, Gayama, Gindin, Dutshe, Gyatta, Aure, Mararaba, Nyita, Suntai, Asibiti and Bikadarko.

Ibi LGA counts as one of the seventeen Local Government Areas of Taraba State. It has an adminstrative headquarters in the town of Ibi, with other notable urban areas like Dampar, Nwonyo, RimiUku and Sarkin Kudu also making up the area.

Jalingo LGA is the capital Local Government Area in Taraba State. It is headquatered in the central part of Jalingo city. As a developed area, there are many urban areas that make up. They include the following: Jalingo, Abbare Yelwa, Barade, Kona, Kachalla Sembe, Majidadi, Novembero Gol, Sarkin Dawaki, Sintaii and Turaki.

ALSO READ:  How To Calculate Treasury Bills in Nigeria

Lau LGA is a Local Government Area in Taraba State. It has an administrative headquarter in the town of Lau and the area  consists of Lau, Kunini .Novembero Lope, Garin Dogo, Garin, Mashi, Lainde, Abbare, Minda and Donbelli towns making up.

Takum LGA is one of the Local Government Areas in Taraba State. It is headquatered in Takum, a commercial town in the state. There are many urban areas which include Takun, Bete, Dutshe, Fete, Gahweton, Manya, Rogo, Shibong, Tikari, Yukuben, Bikashibila and Chanchanji communites making up the LGA.

Yorro LGA is one of the seventeen local government areas in Taraba state. It has an administrative headquarters in the town of Kpantisawa, among other communities that made it up include Bikassa, Nyaja, Pantisawa, Pupule and Sumbu.

Zing LGA is one of Taraba State local government areas. Headquartered in Zing Town, where the area got it name, other notable urban areas include the following: Bubong, Lamma, Monkin, Yakoko, Dinding and Bitako.

Taraba state is one of the destination for visitors in Nigeria. The state is much alluded to tourism, which is obvious in tourist attractions like Mambilla Tourist Center, Gumpti Park and game reserve in Gashaka, and the Nwunyu Fishing festival making up as the fascinating sites in Taraba State. These are few to mention, as there are other attractions like mineral resources which leads to industries, quality infrastructures and serenity. That’s our take on this, as we’ve enumerated in this article the local government areas in Taraba State with their corresponding towns.