Taaooma is an outstanding comedienne who have been very influencial in the Nigerian entertainment industry for some years now. She is well-known as a comedian, and also a cinematographer and content creator. Her prowess in the entertainment industry, especially in the comedy scene, has got her the fame to be nationally recognized. Most especially as she is popularly known for her comedy style of making jokes about typical Nigerian mothers. There many things to know about Taaooma as we will explicate her biography, and also how she came this far. 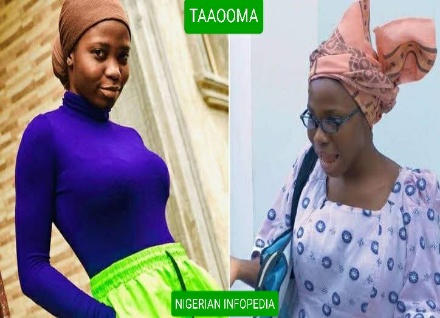 Here is the write-up on the life and career of one of the leading female entertainer in Nigeria, Taaooma. This write-up will incorporate all you ought to know about her: personal life, spouse, family, education, career, and networth.

Before going into Taaooma biography, here’s a quick rundown of her profile and a few things you’d love to know her.

Apaokagi Maryam who is popularly known as Taaooma, was born on 27th December 1999.  She was born in her hometown in Ilorin, Kwara State which is located in the western part of Nigeria. Being a Yoruba area, the comedienne is of the Yoruba descent. Her mother is Mrs. Aishat Apaokagi. Taaooma was born into a Muslim family of which she is a devoted one. Because of her religion, she is always seen tying a scarf to cover her hair in her skit and even when in public.

On her personal life, Taaooma is currently in a relationship with Greene Abdulazeez, a popular Nigerian video director, who is currently her recognized boyfriend.

Taaooma had her basic education in Kwara state before she relocated to Abuja, where she furthered her education pursuit. The promising comedienne finished her secondary school abroad at Concordia College in Namibia. Taaooma later finished her education at her State’s university of which is a graduate of Kwara State University. At the university, she obtained a Bachelors’s degree in Tourism and Travel Services Management. Taaooma completed her National Youth Service Corps (NYSC) program on December 2022. After finishing her education, she has great plans to make a name in the Nigerian entertainment industry, most especially on comedy.

Taaooma came into the comedy industry not long ago, as she began acting comedies since 2015. She came in an got the attention of many people which leaded to her eventual fame. Typically, in her comedy skits, She usually mimics the regular African mother, thereby emphasizing hilarious scenes. Her videos often reflects the approach African mothers respond to the actions of their children.

Taaooma often attribute her entry into the comedy industry to her boyfriend. In an interview with her, she revealed how her beau helped her to harness her talent and encouraged her to start making comedy skits. Abdulazeez was the young man, as she stated that his persuading made her opt into the entertainment industry. Interestingly, Abdulazeez her boyfriend, is a music video director in the industry. Taaooma jointly own a production company called The Greenade Company, with her boyfriend. She describes the project as a full time video production company with plans to make movies there in the coming years.

On her fame in the comedy industry, Taaooma came into the spotlight in 2016 after her comedy videos started making waves on social medias. Her Instagram videos about experiences with an African mother and child made he to be rated. At the Gage awards in 2019, Taaooma won the “Best Online Comedian of the year” award.

Recently on 23 December in the year 2022, Taaooma created a comedy health skit, to spread the word on COVID-19 and help inform the country’s populace to curtail the spread of the viral diesease. Reactions came out from this piece and on 16 December 2022, she became a trending topic, after the skit had gone viral. This contributed to increasing her popularity, of which her followers grown to 1 million on Instagram. In another related program, Taaooma also spoke about Covid-19 on Inspiring Africa show live on Euronews. In the show, she lay emphasis on African parents who were ignorant about this diesease.

Taaooma is an influencial entertainer who has got many accolades from not only her fans, but some recognized bodies. Her awards and honors reflects her skills and hard-work in the entertainment industry. In 2019, Taaooma won the “Best Online Comedian of the year” award at the Gage awards. It didn’t stop there, as she also made it to the PMNewsNigeria.com’s list of the Top 25 Under-30 Nigerian Superstars. She made it the number ‘15’ position in the list. She is also among the top Nigerian comedians on YouTube and Instagram.

Being one of the notable names in the comedy industry, indeed Taaooma has some worth. The comedienne is currently one of the richest and one of the most sought after entertainer in country’s Comedy industry. Taaooma has an estimated net worth of $700,000 dollars. This she earn from her dedication and work in the entertainment industry.

Taaooma is one of the fastest-growing comedians in the Nigerian entertainment industry. With more than 1 million followers in less than 2 years of hitting the limelight, she has been a recognized figure in this area. Taaooma has many collaboration with other prominent entertainers in the comedy industry. She has also been severally featured with prolific comedian, Mr Macaroni, who sometimes acts as the father of the house in her videos. At 21 years (as at 2022), Taaooma is one of the youngest elites in the Nigerian comedy entertainment.

This article gave the biography of Taaooma, and in the course of it, we have covered her background, career, education, her comedy work which brought her this fame, and subsequently her net worth as at this current year. That’s is the size of this write-up.