The navy like the air force and army is another armed wing of the military of any sovereign state, whose aim is to protect and defend the territorial waters from threats or foreign invasion. 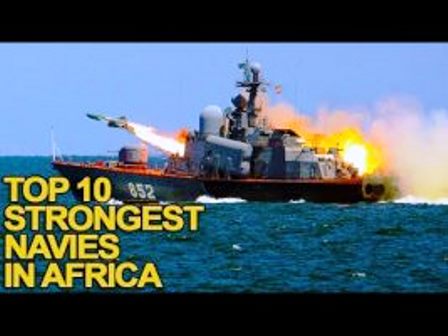 It is no surprise that these powerful African countries that have the strongest naval fleets and weapons are considered the most influential when it comes to certain key decisions regarding the continent.

Monies allocated to these countries defense budget runs into millions of dollars as they boost the strength of their fleet especially when there is need for upgrade of armory.

In an attempt to rank the top navies in Africa, we used the ranking system of the Canadian Navy that was developed as a benchmark for all naval forces in the world.

In a report by Leadmark strategy, these are the criteria to access how strong a country’s navy is:

Rank 1: Major Global Force Projection Navy (Complete) – This is a navy capable of carrying out all the military roles of naval forces on a global scale. It possesses the full range of carrier and amphibious capabilities, sea control forces, and nuclear attack and ballistic missile submarines, and all in sufficient numbers to undertake major operations independently. E.g., United States.

Rank 2: Major Global Force Projection Navy (Partial) – These are navies that possess most if not all of the force projection capabilities of a “complete” global navy, but only in sufficient numbers to undertake one major “out of area” operation. E.g., Britain, France.

Rank 3: Medium Global Force Projection Navy – These are navies that may not possess the full range of capabilities, but have a credible capacity in certain of them and consistently demonstrate a determination to exercise them at some distance from home waters, in cooperation with other Force Projection Navies. E.g., Canada, Netherlands, Australia.

Rank 4: Medium Regional Force Projection Navy – These are navies possessing the ability to project force into the adjoining ocean basin. While they may have the capacity to exercise these further afield, for whatever reason, they do not do so on a regular basis.

Rank 5: Adjacent Force Projection Navies – These are navies that have some ability to project force well offshore, but are not capable of carrying out high-level naval operations over oceanic distances.

Rank 6: Offshore Territorial Defence Navies – These are navies that have relatively high levels of capability in defensive (and constabulary) operations up to about 200 miles from their shores, having the sustainability offered by frigate or large corvette vessels and (or) a capable submarine force.

Rank 8: Constabulary Navies – These are significant fleets that are not intended to fight, but to act purely in a constabulary role.

Rank 9: Token Navies – These are navies that have some minimal capability, but this often consists of little more than a formal organisational structure and a few coastal craft. These states, the world’s smallest and weakest, cannot aspire to anything but the most limited constabulary functions.

With the above ranking system, you might guess the number where influential countries with like Nigeria, Libya, Egypt, South Africa will fall under since the major function of the navy is to ensure that there is peace and stability at the riverine area and seaports of any country.

So, which country has the best navy in Africa?

We made our research and came up with the list of top 10 countries with the most powerful naval forces in Africa.

They are the biggest and strongest Navy in Africa with over 20,000 active men and approximately 16,000 reserved men. It was founded as early as 1800.

Its military equipment is categorized as one of the strongest with naval fleet which consist of mistral-class amphibious assault ship, type 209/1400 mod class submarine, type 033 Romeo class submarine etc. This makes the Egyptian navy one of the most equipped navy in Africa.

Its command headquarter is located at Alexandria. Its uniform consist of multiple colors such as blue, red, white and black.

Over the years, Egyptian Naval force has tested its strengths by been engaged in so many wars, among them was the battle of the Delta against the Sea Peoples; First and second Egyptian-Ottoman War in 1831 and 1839 respectively etc.

Ranked as 2nd most powerful navy in the continent, the Algerian Navy was founded in 1516 and it is the oldest navy in Africa. Its headquarter is located in L’amiraute.

It’s also one of the largest navy in terms of size with an active men of approximately 17,000 personnel.

Some of its equipment include 80 vessels, 30 helicopters and numerous boats for constant patrol and quick military response.

Currently ranked the 3rd strongest navy in Africa, the Nigerian navy was founded in 1958 and has since been engaged in different wars which among them was the civil war, Boko Haram insurgency and the militants of the Niger-delta, etc.

Nigeria is one of the most influential countries in Africa with its military budget placed on a high. It has more than 16,000 active officers while its reserve men is approximately 2000.

It’s often empowered by the federal government by providing sophisticated arms and ammunition which include 3 amphibians tank, 3 frigates, 2 offshore patrol vessel, 4 patrol cutters among others.

The Nigerian navy is one of the most respected navies in the world due to its prestige and organization.

Moroccan Navy existence can be traced back to the 11th century but it was modernized on the 1st of December 1960.

It may not be as huge as others in number but it is rich in military experience. Research has it that they are the most equipped naval force in Africa with more than 89 vessels, 17 boats among others.

The Moroccan navy is ranked fourth and it’s made up of 8000 active men and 500 reserve men. It ensures that there is optimal security and defence of the international waterway in the country.

South Africa Navy was modernized in 1962. Its headquarter is located at Saldanha bay, Simon’s town, Durban.

Its made up of 7,702 active men while it reserve men are 1,000. Its uniform color is green and white. The officers of the SA navy are strong and have also been engaged in some sea battles, especially sea pirate attacks.

This military outfit was established in 1965 and is presently ranked 6th strongest naval force in Africa.

The Somalian navy is also one of the biggest when it comes to numbers of active officers. Its uniform colour is blue Gold. It can boast of 2 missile boats and some perfect vessels.

According to Wikipedia, the Tanzania Naval Command is the naval branch of the Tanzanian Armed Forces. It was established in 1971 with assistance from China.

Just like the rest on this list, the Tanzanian navy is another strong navy that found its way into this list not because of its size but due to the number of sophisticated arms and ammunition it acquires/possess.

Their headquarters is located at Kigamboni, Dar es salaam. It was engaged in operation democracy war.

It was founded in 1962 with Tripoli as its headquarter. The Libyan Navy was supposed to be the country in Africa with the strongest navy in terms of weapons but due to the crisis rocking the country, they are ranked 8th on the list.

ALSO READ:  How To Join Nigerian Navy As A Graduate

The Libyan Navy is a fairly typical small navy with a few missile frigates, corvettes and patrol boats to defend the coastline, but with a very limited self-defence capability. The Navy has always been the smallest of Libya’s services and has always been dependent on foreign sources for equipment, spare parts, and training.

Libya’s Navy first tasted military action in an encounter with the United States Sixth Fleet in December 1986 in the Action in the Gulf of Sidra (1986), when one missile boat and a corvette were destroyed, and other ships were damaged by A-6s. Unusually, some of these attacks were performed, successfully, with CBUs like the Mk.20 Rockeye designed as an anti-tank weapon.

Currently, they have 3000 active able-bodied men and 500 reserve. To know more about their naval strength see here.

The Kenya navy is ranked 9th best navy in Africa. Created in 1964 with its headquarter located at Nairobi, they were engaged in operation Linda Nchi war that started on the 16th December, 2011 and ended on the 13th may 2012 in Somalia.

The ranks in the Kenyan navy does not follow the traditional naval ranks as it is more with the ground forces kind of ranks:

Its officer ranks include:

The Ghanian navy was founded on 29th of December 1959. They are the 10th best navy in the African continent.

The Ghana Navy (GN) is the naval warfare organizational military branch of the Ghanaian Armed Forces (GAF) controlled by the Ministry of Defence (MoD).

NOTE: This list of best navy in Africa is based on these countries past and current achievements; Quality of arms and ammunition they possess, numbers of active men and finally, how respected and organized they are.