There are countries in Africa that possesses top special forces that carry out strategic military exercises and covert operations currently. These forces are specially trained with high tech weaponry and ammunition in their arsenal that are of high grade.

We have compiled the latest ranking of the best special forces in Africa as a continent this 2020 and included information about their strength below.

What makes the Egyptian army special is that they are not only the largest army in Africa, but in the middle east and also in the Arab world.

Currently ranked as the 10th most powerful army in the world, the Egyptian military boast of a special force within its ranks that are known for carrying our deadly operations for the government especially in enemy territory.

The reason why the Egyptian army are very powerful is not just its history since ancient civilization but how much they allocate to their defense budget and the amount of weaponry in their arsenal.

This is also one of the best forces in Africa today. Formed in 1977, the Botswana Defense Force (BDF) is the tactical military wing of Botswana.

The BDF various successful missions on anti-poaching activities, disaster preparedness and quick response plus support to civil authorities and foreign peacekeeping activities has seen it been ranked as the second powerful army in Africa that maintains a tactical, well trained disciplined force capable of defending itself and carrying out various covet operations. It is said that they are funded by the United States.

The Kenyan Defense force (KDF) are top special military trained forces that are known to perform efficiently with almost zero casualty for the government.

The unit are known to carry out high-risk missions such as counter-terrorism, raids, rescue missions, reconnaissance surveillance and also intelligence gathering when assigned.

Dully recognized in the world, they are professional and are distinct from other African troops. You would normally see them with their green berets in Kenya.

Since their inception, the number of the Kenya defense force has grown from strength to strength and has recorded notable achievements especially being deployed in peacekeeping missions around the world.

The Nigerian army was ranked fifth strongest military in Africa in 2016 due to its strength, population, weapons, size and achievements in the past.

Being the largest African country due to its size, the Nigerian Army is rated as one of the best equipped fighting forces on the African continent.

Although, they fight and bear the brunt of the nation’s security challenges, the reason why the Nigerian Army is seen as one of the best special forces in Africa is that they are the most successful ground force when it comes to peace keeping missions.

One of the achievements of the Nigerian army is the curbing to the minimum the threat of the deadly Boko Haram sect responsible for the massive killings in the Northern region of the country.

One of the most powerful military in the continent is Tunisia. They are ranked 5th among the best special forces in Africa for 2020.

Tunisia strength lies in her army. With an army of 50, 500 personnel equipped with 84 main battle tanks and 48 light tanks, they are sure to perform virtually well on land.

The Tunisian Air Force comprises of an estimated 7,000 personnel with 27 combat aircraft, and 43 helicopters while the navy has a number of 5000 that operates 25 patrol boats and 6 other craft.

Tunisia participated in United Nations peacekeeping mission in the DROC (MONUSCO) and remains top best ground force in the whole of Africa.

They are responsible for land based military operations. With a numerical strength of about 180,000 troops trained for war and an additional force of 160,000 reserves, the Royal Moroccan army is sure to live up to its bidding as one of the strongest top most powerful forces in Africa due to its military strength.

The Algerian army also known as the people’s national Army has two armored and three mechanized divisions namely the 8th Armored Division based and the 40th Mechanized Infantry Division. The People’s National Army is currently ranked the seventh best special forces in Africa 2020.

If you are looking for a country in Africa that has one of the most organized military, meet the South African Special Forces. They are a skilled division in the armed forces that specializes in land, airborne, and waterborne operations.

The United states in 2014 described the South African special force as “dynamic and effective force, which boasts specially-trained personnel, and is equipped with specialist equipment”.

They are also well equipped and are so good in carrying out smooth combat operations against national threats.

This is the military of Ethiopia and the ninth best special force in Africa today.

The Civil direction of the military is carried out through the Ministry of Defense, which oversees the ground forces, air force, as well as the Defense Industry Sector.

In the Libyan National Army, there is a special squad that can be equated to that of the US marines or Navy seals. They carry out most of the government dirty operations within and out of the country.

While they are rated last is that with the overthrow of Mummar Gaddafi, the squad has been weakened due to politics.

They were very effective during the reign of Gaddafi and were seen as one of the top 10 best African special forces with enough fire power and thorough discipline.

All Military and Paramilitary Ranks in Nigeria 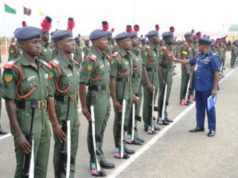