One of the earliest communities in Western Africa known to have existed was the Nok civilisation. It existed in present-day Nigeria between roughly 500 BCE and 200 CE. The human faces’ triangular or oval eyes are one of the distinguishing features of Nok sculptures. The Nok people’s usage of iron technology is a key aspect of their culture. How well-versed are you in Nok culture? Truth be told, this culture has had a significant impact on Nigerian history. We will cover all you need to know about this ancient culture in this essay. 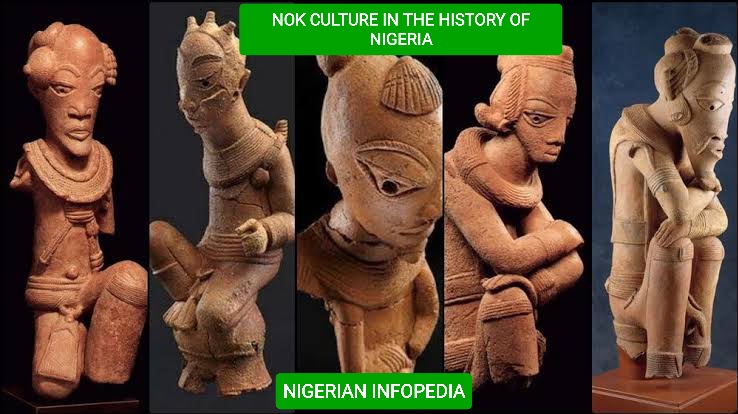 IMPORTANCE OF NOK CULTURE IN THE HISTORY OF NIGERIA

The following paragraphs will explore the importance of Nok culture to Nigeria’s history.

THE DISCOVERY OF THE NOK TERRACOTTA

The Nok civilisation first originated in Nigeria around 1500 BC and vanished around 500 AD due to unknown reasons. Their principal locations included Samun Dukiya, Taruga, Jema’a, and Nok village. Colonel Dent Yong, who was a co-owner of a mining company close to the settlement of Nok in Kaduna state, made the initial discovery of Nok terracotta in 1928.

A man uncovered a terracotta skull in 1943 while mining for tin near the Nok hamlet near the Jos Plateau region of Nigeria. The evidence of the first known symbolic statuary was suggested by this ceramic head. Then, this man went to an archaeologist by the name of Bernard Fagg and informed him about several antiquities that were peculiar.

Later, Bernard Fagg and his companions learned they belonged to the Nok civilization of the time. This was due to the fact that they possessed several distinctive Nok ancient traits.

Terracottas from Nok were scattered across the Sahel grasslands as a result of natural erosion and residue. These terracottas were saved as a collection of stray parts. The Nok art is primarily recognized for its heads for this reason. The impact of water erosion is the cause of the fragmented state of the Nok sculptures. They had been discovered in fragments. They were covered and polished as well.

The Nok pictures typically have human heads that are proportionately larger than their bodies. This is due to the fact that not enough information about Nok culture was available to be able to explain this specific imbalance in the appearance of the human picture. However, it was eventually determined that this represents appreciation for intelligence in later African art traditions.

IRON TECHNOLOGY OF THE NOK CULTURE

The Nok region may have historically engaged in ironworking, according to evidence. Furnaces used for smelting iron were discovered near the town of Taruga in northern Nigeria. Ironworkers were a specialty of the Nok people. Additionally, numerous Nok artifacts made of iron were discovered. Farming tools and weaponry are among these iron relics.

Given the significance of ironworking to the Nok, one may assume that this aspect of their culture is the most well-liked. The Nok art is what led archaeologists to the area of the Nok where their materials were placed.

FINDINGS ABOUT THE NOK CULTURE

Archaeologists have evaluated the clay the Nok people used to create their statues. They discovered that every piece of clay originated from one significant source, indicating that a top-level authority was in charge of overseeing the clay supply. The Nok people were also found to have employed stone tools in addition to metal ones, according to other discoveries. This particular discovery implied that inadequate metal materials existed.

Additionally, it was learned that the Nok people were famous for something. They gained notoriety for being the first to go from stone to iron tools without first mastering the art of making bronze or copper tools.

RECENT DISCOVERY OF THE NOK CULTURE

The Nok terracotta figures have been found to have been heavily plundered ever since the 1970s. It was determined that in 1994, the Nok cultural area began to scale up these terracotta figurines. Two significant local vendors emerged by 1995. To unearth this terracotta, each of the major traders engaged over 1,000 laborers each day. Even though the majority of the terracotta statues were broken, some of them were still intact and sellable.

All of factors have caused hundreds of Nok cultural sites to be used illegally. These areas have been unlawfully excavated in an effort to find these Nok terracotta figures so they can be sold. The illicit exploitation of Nok cultural sites has resulted in the loss of important knowledge about the Nok way of life. The archaeological remnants of these clay statues are lost when they are dug up.

DESCENDANTS OF THE NOK CULTURE

These include those with which the Nok civilization has aesthetic and cultural affinities. The Dakakari and Yoruba peoples, who speak Niger-Congo, may be descendants of the Nok people, as are Sokoto and Katsina. Additionally, the aesthetic resemblances between the bronze statuettes of the Yoruba Kingdom of Ife and the Bini kingdom of Benin and the Nok terra cotta are proof that the Nok culture’s traditions were upheld.

It is thought that the metalwork of the Ife kingdom was influenced by Nok art. This is due to the Ife people’s fame for elaborate and lifelike metal statues of human heads, which they shared with the Nok people.

The relevance of Nok culture in Nigerian history was thoroughly examined in this post. One of the earliest societies in West Africa that has been studied is the Nok civilisation. The only reason this civilisation is known as the Nok culture is because of its material remains, which are called after the settlement of Nok in Kaduna state, Nigeria. The distinctive terracotta figures and pioneering use of iron are two characteristics of the Nok culture. The ceramics and ironwork of the Nok were well-known. The Nok culture, for example, has much to do with modern cultures. This culture had a significant historical impact on Nigeria.