Home Government The Significance of June 12 in Nigeria History & Democracy

June 12 is a date that is very important to Nigeria’s democracy and history. The nation’s democracy is currently going through a difficult transition as our politicians are fundamentally self-centered. In addition to having ineffective electoral and political processes. They don’t place much importance on serving their fatherland. The insatiable need to get fortune is what really matters to them. Thus, the purpose of June 12 is to serve as a reminder to Nigerians of the dangers of the past. It also serves as a reminder of the errors made in the present and the necessity of upholding democratic principles. The new democracy day, which falls on June 12, also has numerous other significances. In this article, we shall highlight and describe each of them. 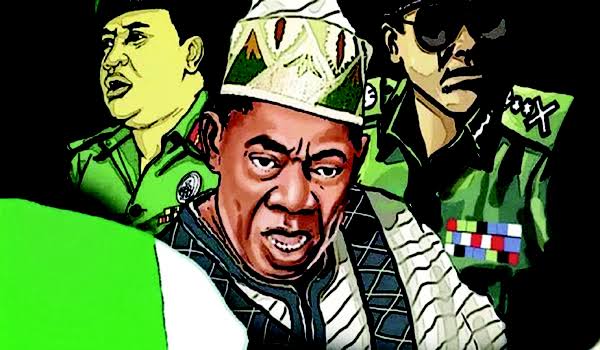 THE SIGNIFICANCE OF JUNE 12 IN NIGERIA HISTORY AND DEMOCRACY

Nigerians have a national holiday on June 12 in observance of Democracy Day. Up to June 6, 2018, it took place every year on May 29. Democracy Day commemorates the day in 1999 when the military ceded power to a democratically elected civilian administration. Since Nigeria’s liberation from colonial authority in 1960, this marks the start of the longest period of continuous civilian government. Since the year 2000, it has become a tradition to hold it every year. In the past, Lagos, Nigeria, and several of the south-western states of Nigeria would commemorate June 12 as Abiola Day.

Following years of military dictatorship, Nigerians flocked to the polls in their millions on June 12, 1993, to choose their new president. The election was deemed to be the most free and transparent in Nigerian history. Tribal, religious, and sectional feelings were not present throughout the voting. Though competing on a Muslim/Muslim ticket, Chief Moshood Abiola of the Social Democratic Party (SDP) and Babagana Kingibe were widely regarded to have won the election.

ALSO READ:  Control of The Civil Service in Nigeria

The outcome of the exercise was highly anticipated by Nigerians. However, they were brutally stunned when Ibrahim Babangida, the then-military president, nullified the election. Security personnel killed numerous pro-democracy activists and other Nigerians as a result of protests. Many people had to move across the country as a result.

Prior to getting compelled to resign, Babangida transferred power to an interim administration led by Chief Ernest Shonekan. This hastily put together arrangement was short-lived since late General Sani Abacha pushed Shonekan aside and assumed control. Abiola formally proclaimed himself president in 1994. The government then detained and imprisoned him after charging him with treason. Later, in disputed circumstances, Abacha and Abiola passed away in June and July of 1998, respectively.

On May 29, 1999, Chief Olusegun Obasanjo received the reins from General Abdulsalami Abubakar, who succeeded Abacha. Since that time, there have been no military-related disruptions to Nigeria’s democracy.

Several of the advantages of the June 12 battle is that it has allowed for the transition from one civilian government to the next without the use of military force since 1999. Up until President Muhammadu Buhari signed the bill designating June 12 Nigeria’s new Democracy Day last year, we had been commemorating this democracy on May 29 every year.

The Federal Republic of Nigeria observes a public holiday called Nigerian Democracy Day to mark the return of democracy. Olusegun Obasanjo was inaugurated as President of Nigeria on May 29, 1999, which served as the first official Democracy Day in Nigeria. That put an end to a long period of military control that had started in 1966 and had only been broken up by the 1979–1983 brief democratic period.

The re-democratization of Nigeria was pushed for by civil society organizations. Their initial request was for Abiola to receive the mandate once more. The nation experienced a lot of dread and instability at this time. People in the Abacha Regime organized to confront the difficulties posed by a military government that had broken its word to transfer power to duly elected officials.

The Abubakar administration organized elections after facing intense pressure. These occurred over a short period of time, from late 1998 to February 1999, for state governorships, the senate, and municipal councils.

With the announcement of General Olusegun Obasanjo, Abubakar’s transition eventually reached its culmination. In late February 1999, the general, who had retired from the military, was elected president. On May 29, 1999, he was duly sworn in. This illustrates why May 29 was designated as a national holiday to honor Nigeria’s return to civilian governance.

Abiola spent the majority of this period incarcerated. He made the declaration in 1994 after returning from a trip to garner the backing of the world community for his presidency. On the instructions of the then military president, General Sani Abacha, he was detained after claiming the presidency and charged with treason. 200 police cars were sent by the then-military president to arrest him.

On July 7, 1998, the day before his release, Abiola passed away in mysterious circumstances.

The Federal Government of Nigeria, led by President Buhari, designated June 12 to be the new Democracy Day on June 6, 2018, eight days after May 29, 2018, had been observed as Democracy Day. On June 12, 2019, Buhari delivered his speech to the nation to begin his second term. These were created to honor MKO Abiola’s democratic election on June 12, 1993, which was deemed to be the most open and transparent election in Nigerian history. On the other hand, the Ibrahim Babangida Junta erroneously annulled it.

ALSO READ:  The Truth on How Prophet Muhammed Died (When & Where)

After MKO Abiola legitimately proclaimed himself president, he was later arrested. The strange death of Chief MKO Abiola occurred after he drank tea during the negotiations for his release. In Kofi Annan’s presence, he started coughing, and he subsequently passed away in the hospital. MKO pledged to bring back effective government in Nigeria.

The declaration of June 12 as Democracy Day by Buhari should be interpreted as an effort to appease the South Western Nigerian State. It has always been customary to observe this day as a time to recall Abiola’s swindled election and stolen mandate. Many people continue to believe that this was the freest and most impartial election Nigeria has ever had.

The fact that Goodluck Jonathan, the then incumbent president, failed the presidential election in 2015 and admitted concession is another result of democratic democracy.