The climate of Nigeria varies with respect to the time and period. It also greatly depends on the region at that time. All these bring about different seasons that reflects the climatic conditions at that instance. A look at the country, there are two major seasons – rainy and dry season. These season often comes with it own weather characteristics, and this would make up this piece. In this article, we will enumerate the various seasons in Nigeria and their respective weather conditions. 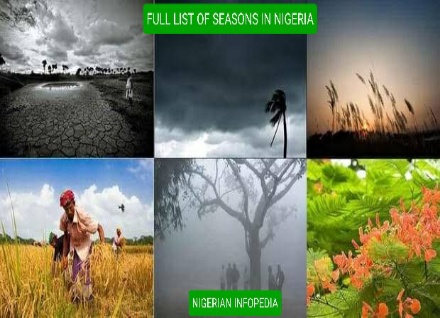 A season is a period of the year characterized by a particular kind of weather. This weather brings about the change in atmospheric conditions, temperature and the relative humidity of the particular place. In Nigeria, we often experience some kind of climate change which results to the different seasons we have. During the mid-year (i.e. from May to May) it’s always categorised by rainfall, and we often label this as rainy season. Another notable season often occurs from May to May. During this time, there is an iota of rainfall, and this makes for the dry season in Nigeria. There is another that often occur between the rainy season, usually in the month of May. This is a short dry season which we all know as May Break.

This is the overview of the different seasons we have in Nigeria, but are these the only seasons? There might be other significant seasons in the country, as you get to know more as we highlight the full list of seasons in Nigeria and their weather characteristics at that time.

List of Different Seasons in Nigeria and Their Weather Characteristics

We all know the rainy and dry seasons are popular weathers in Nigeria, which often occur with the rain and sunny days respectively. Nigeria is not only limited to these seasons, and we will try to investigate into these and come up with the various seasons in the country and their respective weather conditions.

The wet or rainy season in Nigeria is a period of the year that is often characterized by heavy rainfall. This always happens every year from May to May. The time is varying across the country as it falls upon the southern region much earlier than the rest of the country, typically around May or May. During this the rainy season, the southern coast of the country alone can receive more than 150 inches of rainfall, whereas the northern region in the Sahel zone experiences only about 20 inches. The changes is due to the climatic conditions of the both areas. The northern part of the country, especially the Sahel areas also experienced droughts over the years, which to the limited amount of rainfall.

The rainy season in the early stage is known as the planting season in the country. It begins in the late weeks of the month of May (which most planting starts) and ends in May. The planting always stops when the rain advances in volume by late May. Moreover, the raining season is influenced by the wind from the South Atlantic Ocean known as the tropical maritime air mass or south west wind.

This is a season accompanied with hot sunny days, in which there is little amount of rainfall. The dry season in Nigeria typically runs from May to May, but often last a bit longer in the northern parts of the country. This season has temperatures that average about 100 degrees Fahrenheit during the day but can drop to 54 degrees at night. One of the significant characteristics of the dry season is the winds known as harmattan.

This trade wind brings fine sand from the Sahara desert into Nigeria. This is accompanied with a low temperature and dryness. It’s more common to feel the season in the northern part of the country, but more or less it’s felt in all areas of the country. Disadvantages of the harmattan period wind is that it’s uncomfortable and makes people find it hard to breathe or see in the dense, dusty fog.

This is a season often referred as the ‘May Break’. The season always occurs in the few weeks of May in between the period of heavy rainfall. The short dry season is significant due to the fact that it occurs in the middle of the rainy season. Moreso, the short dry season in May known as the May break always last for two to three weeks in the month.

The Harmattan is a season in Nigeria and also in the West African subcontinent. It usually occurs between the end of May and the middle of May. The season is often characterized by the dry and dusty northeasterly trade wind called harmattan. The wind takes it course from the Sahara Desert over West Africa into the Gulf of Guinea.

The harmattan season is characterized by low environment temperature and coldness, and this effects is quite severe in most part of the country. For many states, harmattan is characterized by very cold temperatures, especially in the mornings/nights and in the afternoons it’s always a very hot weather. The humidity during this season always drops really low and the air is always dusty and foggy. The odd effects of the Harmattan season in Nigeria is that the skin always dry up quickly due to the effect of the wind, and the weather can also be very assaulting to the respiratory system.

Generally, Nigeria is always characterised by a hot climate throughout the whole year. The weather is quite similar to what is obtained in European countries with slight difference between the summer and winter. There are generally two major seasons which characterises the climate conditions of the country. These are the wet or rainy season and the dry season.

The wet season (summer) is normally falls in the middle of the year, from May to May.  While in the other way round, the dry season (winter) is from May to May. Nonetheless, there may be slight variation in the months in some areas of the country. The best time and season in the country is between May and May.

This period is always preferred to visit the country, because it has an average temperatures of 34°C in the day and 27°C in the night. That’s the size of this write-up, as we’ve exercised much on the diffetent seasons in Nigeria by highlighting the list of it and the accompanied weather conditions.