This is the biography of Ruth Adekola, wife of the popular Yoruba actor Odunlade Adekola. We expose hidden truth about their marriage, infidelity controversy, how she met her husband and pictures. 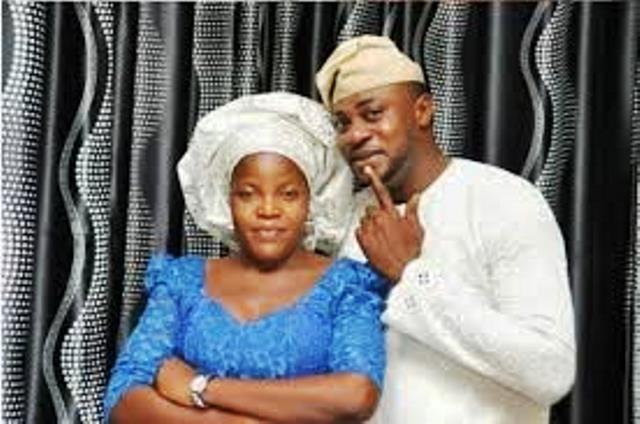 Ruth was born in Ekiti on the 2nd of November. She attended Moshood Abiola Polytechnic in Abeokuta. Her husband too was a graduate of the same school. She met him in Abeokuta in1995 during a vigil organized by Christ Apostolic Church (C.A.C).

Few months after Odunlade met Ruth, he proposed to her. At first, she wasn’t interested in him due to the kind of job he did. Ruth wasn’t just ready to carry the load of marrying an actor. But as time passed, she put it in prayers and with the help of her family and pastor, she agreed to continue the relationship which then led to marriage.

As they courted, Ruth was convinced that she had married the right person. This was shown in the kind of affection and care Odunlade showered his wife.

You might be wondering how many children does Ruth and Odunlade have? Well. this wonderful couple are blessed with four boys. They gave birth to the last child in November 2015 at a private hospital located in Abeokuta, Ogun State.

It was on Odunlade’s Instagram account that picture of the fourth child and wife were made public. This was during the naming ceremony of his son. They had their third child in 2013.

At various times, the media has tried to tarnish the image of this good Yoruba actor. At one certain time, rumour spread out that Odunlade was dating and even allegedly impregnated one of his colleagues who he acted in several movies with, Kemi Afolabi.

The rumor has since being debunked by both parties as Kemi is currently married to Wale Adesipe who is based in the United Kingdom. The actress also made it clear to all that nothing is going on between the two of them and in fact, her husband and Odunlade have a very cordial relationship.

Also, Odunlade was linked controversially to other female actresses. He was said to have allegedly impregnated one Bukola Adeeyo. This actor has featured in several movies with Odunlade. So, due to their closeness on set, rumors filtered out.

More and more controversies seems to never end due to Odulade’s popularity and most of the romantic Yoruba films he acts with other nollywood actresses.

Who is Odunlade Adekola?

Here is a brief profile of Odunlade Adekola.

He was born 31st of November, 1977 in Ogun State but he is hails from Ekiti State. He is rated as the best Yoruba actor in Nollywood at the moment. Since he joined the industry in 2005, he has starred in many movies which has pushed him to fame and also above other actors. His first movie was “Asiri Gomina wa”.

As earlier stated, Odunlade has featured in several Yoruba and English movies till date. Some of the movies which he has produced include: Fayebora, Farapamo, and Baba Super.

Apart from his National Diploma which he got from Moshood Abiola Polytechnic in Abeokuta, he also has a B.A in Business Administration from UNILAG.

Odunlade’s thought on his wife, Ruth

Accoding to the popular actor, Ruth is different from other girls he ever dated. She is an understanding woman who provides and gives him the support he needs both in his career as an actor and even as a father and husband.

It was no surprise that on her last birthday, Odunlade showed off his beautiful wife to the whole world and was also quick to shower her with praises on his Instagram page.

What Ruth thinks of her husband and the controversies

Although Odunlade is quite popular, Ruth thinks he is a different person from what he portrays outside when he is on set. In fact he worships her and would never hurt her. According to her, she knows her husband will never cheat on her even though his profession allows him access to myriad of women.

Due to the many rumors about Odunlade and the controversies, Ruth doesn’t feel angered by such reports and is quick to debunk such because she knows her husband.

You might be surprise that Ruth has never had a major quarrel with her husband that would warrant media attention like other celebrities in the country. She maintains secrecy about issues in their home and prefers to solve them within.

Ruth believes that friends can be a distraction and can ruin marriages just like they do to other nollywood stars marriages. So she doesn’t keep friends or allow their involvement in her peaceful marriage.