Home People Entrepreneurs Who Is The Richest Woman in Nigeria Today? See Answer

Among all business tycoons in the country, the richest woman in Nigeria today is Mrs. Folorunsho Alakija, an industrious woman who is worth $1 billion USD. 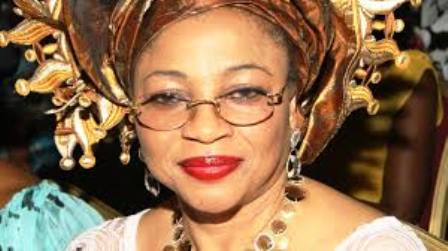 Mrs Alakija was born into a polygamous and wealthy family of Chief L.A Ogbara on February 15 1951 in Ikorodu, Lagos state. Her father had 8 wives and 52 children while her mother was the first wife.

When she was 7 years old, Folorunsho traveled with her younger sister to the United Kingdom where she had her primary school education at Dinorben School for Girls in Hafodunos Hall in Llangernyw, Wales. She also attended the Muslim High School Sagamu Ogun State, Nigeria and returned back to London where she attended Pitman’s Central College for Secretarial Studies.

She started her career by working as a secretary at Sijuade Enterprise. She also worked in First National Bank of Chicago, Lagos. Having passion for the fashion industry, she quit her job to study Fashion Designing after which she set up Supreme Stitches renamed The Rose of Sharon House of Fashion, founded in 1996.

It was in 1993 Alakija made it when a friend of hers introduced her into oil business. She was lucky to be granted license when she applied for the allocation of an oil block in Nigeria’s coastal waters.

Her oil company, FAMFA oil is doing well at the moment and is one of the famous oil producing companies in Nigeria.

She is happily married to her husband, Modupe Alakija and is blessed with four boys. She is also a writer of books. Alakija is ranked by Forbes as the richest woman in Nigeria and second wealthiest woman in Africa with an estimated net worth of 2.5 billion dollars.

Mrs Alakija has an impressive portfolio of investments and assets, one that would make anyone green with envy. She has houses in some of the choicest areas in London, United States and in The Middle East.

She runs a charity foundation known as The Rose of Sharon Foundation with which she helps to take care of widows and orphans; empowering them through scholarships and business grants.

She is really one woman that can be said to have it all.

The Richest Woman in Nigeria 2023: Facts About Her You Don’t Know

There was a period that information about Folorunso Alakija didn’t surface. Googling her now, you would see why this amazon not only became the richest woman in the country but in Africa.

As seen above, she was born into a wealthy polygamous family in the year 1951 in Ikorodu. At first, Folorunso Alakija started as a secretary at the International Merchant Bank. She then went to study in the U.K after she resigned from the job.

Coming back to Nigeria, she established Supreme Stitches which opened the door of wealth for her to own 60% shares of the oil block OML 127 which where most of her riches comes from.

Below are some facts about this wealthy business woman you don’t know about.

According to Forbes, Folorunso Alakija is the current richest woman in Nigeria with an estimated net worth of $1 billion this 2023. She is also the second richest woman in Africa just behind Isabel dos Santos.

Recently, she was listed as the second most powerful Nigerian woman immediately after Ngozi Okonjo-Iweala and also the 87th most powerful woman in the world.

She attended Dinorben Girls School in Wales for her primary education. She then returned to Nigeria where she schooled at Muslim High School in Sagamu.

As reported from an authentic source, she spent over N2 billion on her son’s wedding, Mr. Folarin Alakija. He is currently married to Nazanin Ghaissarifa from Iran. Nazanin studied Bio-engineering & Biomedical Engineering at the University of Manchester in Britain.

The wedding featured popular singer Robin Thicke who performed at the wedding. He was paid N69 million to perform. The venue of the wedding was at Woodstock which cost over N15 million.

The cake used at her son’s wedding was said to cost N1 million and the roses which was done by Jeff Leatham, N100 million.

4. The name of her fashion house was Supreme Stitches

After she went to study Fashion Designing in England, she returned and founded Supreme Stitches, a company which later opened her success in the oil sector.

5. The name of her oil company is called Famfa Oil

Famfa Oil Ltd is owned by Alakija and it was founded in 1993. Folorunsho is a major share holder with 60% shares in Famfa Oil.

The company’s oil field, OML 127 produces about 200 000 barrels daily.There was a time she had issues with the federal government during Olusegun Obasanjo‘s tenure as president. It was only after winning a court case, she had her 60% shares of the company returned to her.

OML 127 is an offshore oil-field and Folorunso Alakija owns 60% shares in this company. It is said that she earns up to 10 million dollars on a daily basis.

7. She has a stake in the real estate industry

Folorunso Alakija real estate worth is valued at $100 million. She also acquired a property at OneHyde Park at $102 million.

8. She owns a private jet (Bombadier)

Alakija is also listed as one of the few Nigerians who owns a private jet which cost $46 million.

She is happily married to Modupe Alakija. They also have four sons who are grown up and one grandchild. We shall provide the names of Alakija’s children in our subsequent post.

You should know that one of her sons remarried recently after losing his first wife to cancer.

10. She still prepares food for her husband

You might be surprised about this but in a 2014 interview, she said that she still cooks for her husband. Even if she has many maids and cooks, Folorunso finds time to prepare her husband’s food.

Folorunso Alakija has a lot of money but believes in love which is the most important thing for her. According to her, it was love that has kept both her and her husband together and not her riches.

She owns the Digital Reality Prints Limited and Rose of Sharon Prints which are part of her many companies.

She is the owner/founder of Rose of Sharon Foundation, an NGO that empowers widows and orphans by providing scholarship and business grants.

Also, through the Folorunso Alakija Scholarship Scheme she continues helping several Nigerian students to get the standard education of their dreams.

Mrs. Folorunsho is also a sponsor of medical and engineering undergraduates through the Agbami Medical and Engineering Scholarship Scheme.

14. DJ Xclusive is her relative

She is also related to DJ Xclusive, one of the most popular Nigerian Dj’s. DJ Xclusive’s real name is Rotimi Alakija. Apart from being a disco jokey, he is also a  record producer and recording artist.

15. She began her career as a secretary

Folorunso Alakija had a successful career in life. She started as a secretary at Sijuade Enterprise. She later then moved to the banking sector.

She also worked at the First National Bank of Chicago before traveling to England where she studied Fashion Design at the prestigious Pitman’s Central College in London.

She is a role model to many young entrepreneurs in the country.

The 4 richest women in Nigeria and their net worth that are influential due to their wealth in the society is what this post seeks to address.

These wealthy Nigerian influential women have overtime proven that they can compete with the top richest men in Nigeria and Africa who are billionaires according to Forbes ranking. Their businesses and assets speaks for them.

The classification of these rich Nigerian women of today are based but not limited to the following factors:

According to Forbes, she is the current richest woman in Nigeria today and also the second wealthiest woman in Africa. As of writing this post, Folorunso Alakija is 62 year old and the source of her wealth comes majorly from oil.

She is also involved in fashion designing business which she studied in the United Kingdom before establishing her fashion company in Nigeria. Folorunsho Alakija is the current Executive Director of FAMFA Oil which is worth above $600 million.

She is the current 4th richest woman in Africa and the second influential wealthy business woman from Nigeria.

She has interest in many top Nigerian companies as majority of her wealth comes from oil sector. It might interest you to know that Bola Shagaya is a board member at Unity Bank.

She has so many landed properties both here in Nigeria, the United States, United Kingdoms and so on. companies to her name and she is a very popular businesswoman. She is also the current CEO of Bolmus Group International.

If you are looking for a female billionaire in Nigeria that is not popular or better still secretive about her wealth, then meet Dr. Mariya Dantata.

She is also involved in many philanthropic acts which she does not want to be made public.

The late Maryam Babangida was wife to former military president of Nigeria, Ibrahim Babangida. Although late, Maryam is still recognized as a very influential figure who was rich.

Her estimated net worth was never known while she was alive as she was involved in various business ventures. She became popular as Nigeria’s first lady but unfortunately death caught her influence.

People say she would have been the richest woman in Nigeria and Africa if she were alive.