The wealthiest individuals in Ondo state have been dully featured on Forbes’ list as Nigerian billionaires, successful entrepreneurs who are into various businesses, having investments and assets that ensures that their financial net worth continue rising. The source of wealth of these Ondo state rich men doesn’t depend on oil and gas, but on other profitable ventures. 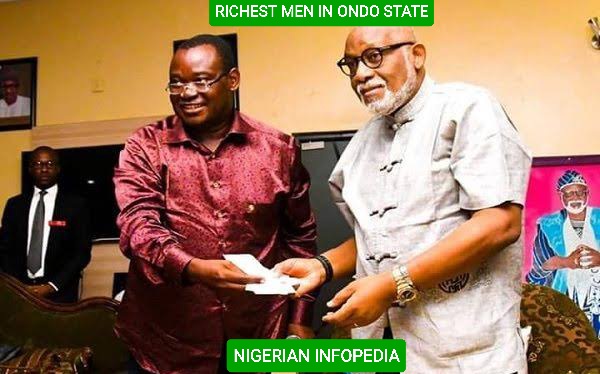 Ondo is one of the highest revenue generating states in Nigeria. Additionally, this south-western state is the highest cocoa producing state in the country. All of these contribute to the wealth of the state and its individuals. Certainly, there are many rich people from Ondo that originates from the ‘sunshine state.’ In the course of this write-up, we will highlight these affluent personalities that has made a name for themselves and the state at large.

Here are the list of top ten richest men in Ondo State and their net worth this 2022:

Jimoh Ibrahim is the richest man in Ondo state with a net worth estimated at $1 billion according to Forbes’. He is a politician, businessman and philanthropist who has fleet of expensive cars, vaarious landed properties and assets. Jimoh Ibrahim was born December, 24, 1967 in his hometown.

Jimoh Ibrahim is the director and CEO of Global Fleet Group, a large conglomerate situated in Nigeria, with business outlets and subsidiaries in neighboring West African countries. He is a native of Ondo State, in southwestern Nigeria. Ibrahim obtained a law degree at Obafemi Awolowo University in Ile Ife, Osun State.

Fredrick Akinruntan is another Ondo state billionaire and the richest king in Nigeria. He is worth $500 Million and is one of the few monarchs to be featured on Forbes. It is said that he owns a custom made Rolls-Royce that the Queen of England used (2012 model). Aside this, he is the founder of Obat Oil, a top oil and gas company with over 50 gas stations scattered over the various regions in Nigeria.

Also note that Oba Obateru Akinruntan is the Olugbo of Ugbo kingdom and is the richest traditional monarch in Yoruba land. He surpassed the like of the Ooni of Ife and the Alaafin of Oyo to this feat. In Africa, only King Mohammed VI of Morocco that surpassed him.

Mosunmola Abudu is the wealthiest woman in Ondo state with a net worth of $100 million. She is mostly regarded to as Mo Abudu and is a popular actress and businesswoman. Born on the 11th of December, 1964 in London, she is a media mogul, philanthropist and former human resources management consultant. She has interests spanning electronic broadcasting, film making and content production.

The popular entertainer has been depicted by Forbes as “Africa’s Most Successful Woman”, and evaluated as one of the “25 Most Powerful Women in Global Television” by ‘The Hollywood Reporter’. Mo Abudu was born in Hammersmith, West London to a Nigerian family from Ondo. In her initial years, it was spent in the United Kingdom. She went to the Ridgeway School, MidKent College and West Kent College. Mo Abudu is a graduate of University of Westminster in London, where she graduated with a degree in Human Resource Management.

Looking at how affluent Mo Abudu really is, she is estimated to have a net worth of $100 million, according to an online report.

Temitope Balogun Joshua is a popular Nigerian pastor from Ondo state. With full name Temitope Balogun Joshua, he was born on December 12, 1963. The rich man of God is a renowned prophet, a TV preacher and among the men of God who performs miracles. He is the founder and leader of The Synagogue, Church, abbreviated as SCOAN. This is a popular Christian megachurch that runs the Emmanuel TV channel.

B. Joshua is one of the richest individuals in Ondo state. With a net worth of US $95 million (Forbes, 2011), the popular TV pastor is fourth on this list.

Olusegun Mimiko is another wealthy individual and the former chief executive officer of Ondo State. Born on the 3rd of December, 1954, the prominent politician was the senatorial candidate of the Zenith Labor Party for Ondo Central District in the 2019 election. The political figure filled in as the sixteenth, and fifth non military Governor of Ondo State, Nigeria, from December 2009, to December 2017. He was also the first two-term governor of Ondo state.

Looking at the background, Mimiko was brought up in Ondo Town, which is located in the state. He built up an interest in governmental issues at a youthful age. His political career started at medical school in the University of Ife (presently Obafemi Awolowo University), where he was a student leader. Mimiko’s net worth is estimated at $60 million

Omoyele Sowore is an influencial human right activist, a campaigner of pro-democracy, and a former presidential aspirant. He was born on 16th December 1971, and an indigene of Ondo State. The aspiring politician is also notable as being the owner of an online news company, Sahara Reporters. The online news website is estimated to be valued at $10 million as at this year. The owner, Sowore is likewise a rich man and he is happily married to a wife with children.

Bowoto Jephthah Oluwatiseyifumi Tanimola is one of the richest men in Ondo state with a net worth of $9 million. Conceived on December 3, 1989, he is prominently known by his stage name Akpororo. By work, he is a famous comedian, performer and entertainer.  Looking at Akpororo background, he is a native of Ilaje, Ondo State.

However, he was born and raised in Warri, a city in the neighboring state where he had his initial education. His profession got going as a local gospel performer. He is a graduate of Lagos State University where he studied Sociology. Akopororo has expensive cars and mansions in his home and even in Lagos.

Olubowale Victor Akintimehin is an international rapper known by his stage name Wale. Born on December 21, 1984, the Ondo native is currently an American rapper and musician. He previously rose to hogh fame in 2006, when his song “Burrow Dug (Shake It)” got famous in his hometown.

The merited musician turned out to be internationally recognized and kept recording music for the local audience. Moreover, Wale is one of the richest men in Ondo state, and he has a good net worth estimated at $9 million.

Popular Nigerian actress, Omotola goes by the real name Omotola Jalade Ekeinde. She is an entertainer, singer, altruist and former model, who is from Ondo state. Since her Nollywood film debut in 1995, she was regarded in Time magazine’s rundown of the 100 most influencial individuals in the world. Also in the list was Michelle Obama, Beyoncé and Kate Middleton.

Omotola, who is an indigene of Ondo state, was brought born in Lagos State. In the year 2014, she was honoured by the Nigerian government as a Member of the Order of the Federal Republic, MFR. This award was conferred to her for the commitments she has made to the country’s movie industry.

Niniola Apata famously known as Niniola is a gifted Nigerian afro-beat vocalist, musician and entertainer who was born on December 15, 1986. She is an indigene of Ondo State, but was brought up in Lagos state. She’s initially a native of Ekiti state. The promising singer went to Apata Memorial secondary school for her primary and secondary training. Niniola is a graduate of the University of Lagos, where she studied Biology Education. She began professional music in 2014 and currently she’s signed to Drumroll records.

Looking at the wealth of Niniola Apata, she brings in her money from music deals and entertainment shows. With this lucrative industry, it is very possible that one of the most outstanding Nigerian female artiste is one of Ondo’s most richest person. Niniola has an estimated total assets and net worth of $3.7 million.

Olumide Edwards Adegbulu prominently known by his stage name “Olu Maintain” (and also called Mr. Yahooze) is a Nigerian chronicle craftsman, lyricist and performer. The musical artist was born on December 1976, and is an indigene of Ondo State. He helped to establish the notable musical group known as Maintain. On the whole, with a good net worth, Olu Maintain is one of the richest musician in Ondo State.

Other Rich People in Ondo State

The list of other notable affluent individuals from the’sunshine state’ includes the following: