Edo state is situated in the south-southern region of Nigeria and has many wealthy business men who are billionaires and millionaires as shown by their net worth. These rich men are either politicians, entrepreneurs, or company owners who have invested a lot of money into various businesses which ensures that their fortunes remain intact. 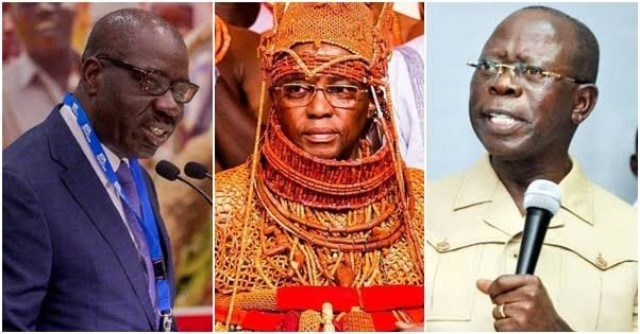 Most of these rich individuals have been mentioned on Forbes’ and they live lavish lifestyle to showcase how rich the people of Edo state are.  Edo is popularly known for their history and culture, and the state has a museum which depicts this culture and tradition. Even the Oba of Benin, a first class king in Nigeria is highly revered by not only the Edo people but by the whole country.

There are many affluent individuals that originates from this south-southern state. Most of them have diversified source of wealth which mostly comes from business. In this write-up, we will examine these top ten richest men in Edo state and their net worth this 2022.

Below are the richest people from Edo state and their various net worth this 2022:

Chief Dr. Gabriel Osawaru Igbinedion is the current richest man in Benin, Edo state with an estimated net worth of $250 million. He is also the most popular figure and is highly respected by all in the state. The respected elder statesman holds the title of “Esama of Benin Kingdom”. He is an eminent altruist and has diversified his businesses in different areas from real estate, education, oil and gas to the mass media.

Igbinedion is the founder of the most popular university in Edo state, Igbinedion University, Okada, a well known private university in Nigeria. He also owns palatial Garden of Eden, where you can see the real meaning of Igbinedion being among Edo state billionaires.

Looking at the Igbinedion’s wealth, the Esama of Benin has a private television station with a radio station. He also owns a private bank, oil refinery, various precious stones such as diamond, gold, marble mines over Africa, and a chain of  hotels. It’s on record that he once owned Okada Air, a private airline company having over 40 aircraft ( both planes and helicopters).

On the religious front, he has also built a good number of Catholic churches and owns numerous private hospitals scattered across Nigeria. His son, Lucky Igbinedion was also the former governor of Edo state and is among the richest personalities in the state.

Mitchell Elegbe is the second richest business man from Edo state with an estimated net worth of $200 million. He is the current CEO & MD of Interswitch, a  multi-billion dollar online gateway payment company in Africa. He is also one of the few most successful entrepreneurs in Nigeria and a role model for youths in the country.

Aside co-founding Interswitch, Mitchell Elegbe is also an engineer, a well known philanthropist who has received various awards for his acts across Africa. Through his company, transactions have been fully automated as he developed a payment system that makes electronic payment easily in Nigeria.

Mitchell has other companies and investments aside Interswitch and lives a simple lifestyle.

Adams Oshiomhole is the richest politician in Edo state and one of the wealthy individuals in the state with an estimated net worth of $200 million. He was once the former NLC chairman, two time former governor of Edo state and even the former APC national chairman. Oshiomhole made money while he was still active in politics and he is also seen as a political godfather in the state.

While much isn’t known about Oshiomhole’s businesses, investments and assets, we know he is a very wealthy man with lots of properties, having occupied some of the juiciest political positions in the country.

Lucky Igbinedion is the son of Gabriel Igbinedion, the Esama of Benin Kingdom. Just like his father, he too is also among the wealthiest man in Edo state with an estimated net worth of $190 million. Lucky was the former governor of Edo state and is actively involved in the state political affairs.

After he left office as governor, he was declared wanted by the EFCC in May 2008 on a 142 count charge of financial fraud. He was alleged to have  embezzled over $24 million via front companies. Igbinedion is also a very influential figure in Edo state politics.

Pastor Chris is by far the richest pastor in Edo state with a net worth of $120 million. He also ranks among the richest men of God in Nigeria, Africa and the world. These feat makes him listed among the wealthiest men from Edo state. Pastor Chris is the General Overseer, Believer’s Love World Ministries, a.k.a Christ Embassy.

His church is also among the richest churches in Nigeria with congregation numbering more than a million members worldwide. Pastor Chris also has investments in the media and even in real estate. It is even rumoured that he is among the Nigerian pastors that owns a private jet which he does not make public.

Eheneden Erediauwa is the current Oba of Benin and among the richest kings in Nigeria. Being a wealthy man, his net worth is estimated at $100 million. In terms of power and influence, Oba Ewuare II is the most powerful person Edo state and is the most respected. His words are taken as law and he is seen as a deity.

Oba Ewuare II is married to various wives and has investments both home and abroad. He also has landed properties scattered around the country and the he is the richest king in Edo state.

Oba Ewuare is also the host of the Igue festival, a popular traditional ceremony at the end of every year in Edo state. In this event, dignitaries, companies, chiefs and societal mandarins from all over the world go to his palace to pay homage to the king. The large attendant earns the king millions of Naira which he gets as freewill endowments from his guests.

Chief Raymond Anthony Aleogho Dokpesi is another wealthy individual from Edo state with a net worth estimated $90 million. Born in May 1951, Dokpesi hails from Agenebode, Edo state and is a famous media entrepreneur in the country. His media company,  DAAR Communications set-up the popular Nigerian TV station, Africa Independent Television (AIT).

He has other investments to add to his fortune and is also the a member of the People’s Democratic Party (PDP). He still has a court case on alleged basis of money laundering and is a recent survivor of the Covid-19 pandemic.

Godwin Obaseki is the governor of Edo state and one of the richest governors in Nigeria. He is worth over $80 million and has other businesses and assets to his wealth. He is a card carrying member of the PDP and an influential figure in the state.

Chief Idahosa Okunbo deals on a Construction industry and has an assessed net worth of $75 million to be listed as another wealthy businessman in Edo State. Okunbo was born on the 7th of May, 1958 and he is a Nigerian business magnate, investor, philanthropist and trained commercial pilot.

Looking at his work, he fills in as either administrator or director on various companies in Nigeria, crossing different business areas. For example, the agro, petroleum, broadcast communications, power, land and banking ventures. The millionaire carried out a homestead project worth ₦150 Billion in 2016. This was made to help 85,000 Nigerians.

Apostle Suleman is a clergy that also makes the list of the top ten richest men in Edo State. Being one of the most popular pastors in the country, he had already made a name for himself. Apostle Suleman is the president and founder of Omega Fire Ministry, OFM worldwide.

The church has its headquarter at Auchi, Edo State. There is a 20,000 capacity base camp church in the town.  The man of God’s is financially successful in light of the fact that he makes a name for both the church and himself.

Looking at Apostle Suleman’s lifestyle, he lives with his family in Auchi in a house worth almost millions of Naira. The devoted man of God is married to one wife and father of six little children. Apostle Johnson Suleman is at present one of the most richest pastors in Nigeria and a successful business man. With an estimated total assets and net worth of $70 million dollar, the pastor is the second richest pastor in Edo state.

OTHER RICH PEOPLE IN EDO STATE

The list of other affluent people who couldn’t make the top ten rundown, includes the following:

Edo State has good numbers of rich people from the area. In a bid to give you a view of the top personalities, we decided to layout these richest men from Edo state to give you a perspective if its most affluent people. We additionally enumerated others that didn’t make the top ten list.