The families that are wealthy in the world controls about 80% of what’s happening in today’s economy. 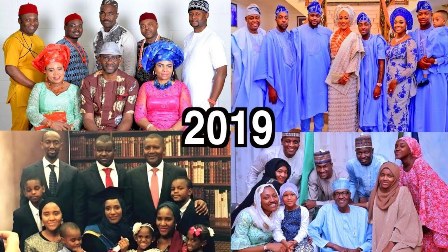 According to Forbes, there are several rich families in Nigeria who own assets and investments worth billions of dollars and are influential in the society.

In no particular order, here is a list of 10 of these powerful richest Nigerian families and their businesses.

First on the list is the Briggs. The head of this family is Chief Olu Benson Lulu-Briggs, one of the current richest men in the country at the moment and the founder of Moni Pulo Limited (MPL) a privately owned indigenous oil and gas company.

The company has its location in Port Harcourt. MPL also has its branches in Lagos and also in London. Known for its expertise in oil and gas exploration in the Niger-delta, it is the operator of the OML 114. MPL operations are efficient and meets the international standards and requirements.

Also, another popular figure in the Briggs family is the wife of Chief Lulu-Briggs, Mrs Seinye Lulu-Briggs. Not only is she the Chief Executive Officer of Rachael Hotels Limited, She is one of the richest business women in Nigeria.

She had worked in the Civil Service before entering the business sector. The investments this family has is worth millions of naira and they are popular in the South-south.

Another member of the Briggs family worthy of mention is Chief Dumo Lulu Briggs, a lawyer and former Executive Director and COO of Moni Pulo Limited.

Talk of wealth and the Ibru family will be mentioned. As one of the most powerful families in the country, this family owns one of the largest conglomerates in Nigeria with the highest employees, the Ibru Organization

The organization was founded in 1956 and have various interest in many endeavours. Popular among their diversified businesses include aviation, oil and gas, shipping, banking and the agric sector. The person who founded the Ibru Organization is Michael Ibru hmself.

Before the organization was established, he had worked for United Africa Company from 1951 to 1956 before going into partnership with Jimmy Large to establish the Laibru General Trading Company.

Also in 1957, Ibru began the distributing of frozen fish in Nigeria; becoming a pioneer in this venture. This led him to establish the Ibru Sea Foods, which specialises in the importation of frozen fish into the country.

As years passed, Ibru’s businesses expanded leading him to invest in other sectors of the economy including vehicle transportation, brewing, distribution and fruit growing, construction and petroleum distribution.

Alex Ibru who was an ex-minister of Internal Affairs between 1993 and 1995 is said to be the present chairman of Rutam Motors. Felix Ibru was one time governor of Delta State while Cecilia was the former Chief Executive Officer of Oceanic Bank and its Managing Director.

Prince Molade Okoya-Thomas is the brain behind the wealthy Okoya-Thomas family. Although late, he was the chairman of CFAO Nigeria Limited. History has it that his father was the first local staff of CFAO where he served for 52 years.

Prince Okoya-Thomas read accountancy at the prestigious Columbia University in New York City in 1981. It was after his graduation, he returned to Nigeria to work as an accountant with CFAO before rising to the chairmanship spot.

A prominent member of the Okoya Thomas family is Princess Olajumoke Abidemi Okoya-Thomas who is a member of the Federal House of Representatives of Nigeria representing Lagos Island I Federal Constituency.

The Dantata Family is currently one of the richest families in Nigeria at the moment. Record has it that billionaire businessman Aliko Dangote is related to this powerful family.

It all started with Alhassan Dantata, a trader who dealt in kola nuts, ground nuts and other businesses. It was said that Alhassan Dantata was one of the wealthiest men in West Africa when he was alive.

Other family members include:

Also on the rich family list is the Fajemirokun family. You might not hear of this family but they have assets and investments scattered all over the country.

Henry Oloyede Fajemirokun, the precursor of this family is one of the key industrialists and businessmen in the country.

Some of Fajemirokun achievements are well documented. He led the negotiations that saw the establishment of a merchant bank. He also founded a pioneer company in the Nigerian Oil industry, Henry Stephen.

This company was the first indigenous private oil company to get an offshore exploration license in 1970.

Bisoye Tejuoso is one of the popular member of this family. She is a rich Nigerian businesswoman that hails from Abeokuta.

She founded the Teju Industries known for manufacturing foams. She is the mother of Oba Adedapo Tejuosho, the Osile of Oke Ona of Egbaland.

Lanre Tejuosho is the son of Oba Adedapo Adewale Tejuoso, another prominent member of the Tejuosho family. He is a senator and a medical doctor.

Adefunmilayo Tejuosho is also another prominent member of the Tejuosho family. She is a politician, lawyer and legislator currently serving her fourth term in the Lagos State House of Assembly.

The Tinubu family is not only one of the richest families in Nigeria, they also have influence in Lagos state.

The head of Tinubu family is Bola Ahmed Tinubu, a politician and one time former governor of Lagos state.
He is also one of the richest politicians in the country with a net worth estimated at $30 million according to Forbes. He has interest and assets to support this claim and even a private jet.

His wife, Oluremi Tinubu is another influential figure in this family. She is a serving senator in Nigeria.

Just like the Tinubu family, the Saraki family is one of the wealthiest political families in the country. They have influence in Kwara state.

Some of the prominent members of the Saraki family worthy of mention include Olusola Saraki, Bukola Saraki and Gbemisola Saraki.

Olusola Saraki, though late, served as a Senator of the Second Republic. He died in 2012.
His son, Bukola Saraki was the former governor of Kwara state and the current Senate President of the Federal Republic. Bukola’s sister, Gbemisola is also a serving senator.

The progenitor of the Folawiyo family is Chief Wahab Folawiyo. He founded Yinka Folawiyo and sons which initially focused on import and export businesses.

Yinka Folawiyo Group which is managed by his son, Tunde Folawiyo has various investments in shipping ,energy, agriculture, and real estate.

Finally on the richest Nigerian families list is the Igbinedion family. This family is very influential to the Benin people.

The progenitor of this family is Chief Gabriel Igbinedion. He is the Esama of Benin, a chieftaincy title conferred on him by the late Oba Akenzua II, a first class king in the country.

Chief Igbinedion is the father of Lucky igbinedion, a former governor of Edo state. His assets is said to worth millions of dollars.

He owns various businesses among which include an oil refinery, private bank, diamond, gold and marble mines, radio station, a private university (Igbinedion University), a private TV station, and chains of hotels in the country.

Jessica Elvis Oluchi: The Untold Truth About Her

The First Nigerian Lawyers From All Regions (North, East & West)

Is Nigeria A Safe Country To Visit? See Answer