Christianity is one of the world’s oldest religions practiced by virtually more than half of the world’s population. Founded by Jesus Christ thousands of years ago, this religion has spread everywhere that various denomination has sprung up since its inception. 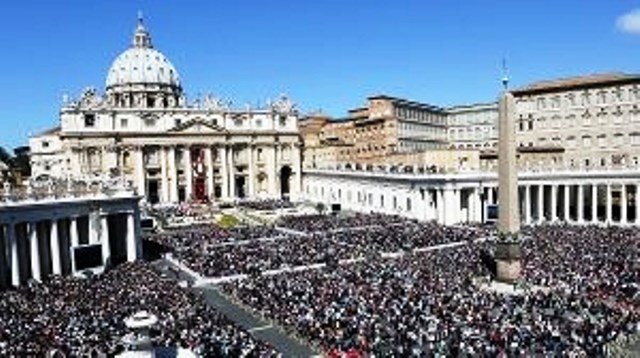 The church is a place where people gather to worship God through His Son, Jesus Christ. In the world today, there are various denominations in Christianity holding various doctrines and forms of worship but all centers around the teachings of Christ, its founder.

The Church is a sacred place where Christians pray, worship God and carry out holy activities as commanded by Christ in the Bible. Most of these churches that have history are known to be extremely wealthy in terms of their financial valuation.

In no particular order, we list out the top 10 richest churches in the world, their headquarters and worth respectively.

The Catholic church is the oldest and richest church in Christendom founded by the apostles of Jesus. It has to its credit about 2 billion baptized followers and has over the years shaped the history of the world.

Also known as the Roman Catholic church, this religious institution is headed by the Pope, the 4th most powerful person in the world by Forbes and has more than 3000 dioceses in virtually every continent and country of the world. Its headquarters is at the Vatican city in Rome.

The wealth of the Catholic Church is worth more than $50 billion dollars as most of its collections, historical artifacts, paintings, Gothic buildings, etc are recorded at the Vatican. Some argue that this figure might be false as the worth of the church might be impossible to calculate.

The various diocese are headed by Bishops appointed by the Pope himself while pastors, deacons and priests are heading various parishes. The Catholic church still remains the largest Christian church were other denominations sprung out from.

Today, the Anglican church has a population of more than 25 million people and is regarded as one of the richest churches in the world too. Although, most countries where the Anglican church is found have distanced themselves from the Archbishop of Canterbury, England who is the primate and the Queen who is seen as the Supreme Governor, her doctrines are still in use till date.

3. The Church of Jesus Christ of Latter-day Saints

This religious organization are also called LDS or Mormon Church and have their headquarters in Salt Lake City, Utah in the United States. They have approximately 17 million members worldwide and are present in over 176 nations with various missionaries and congregations totalling 120,000 and still growing.

The founder of the Mormon Church was Joseph Smith in 1830 at Fayette, New York. The Mormons believe in Jesus Christ but have a different view as to the nature of God and the potential of mankind. Apart from the Holy Bible, they base their doctrine from the Book of Mormon, the Doctrine and Covenants, and the Pearl of Great Price.

According to Wikipedia, they are ranked among the wealthiest religious organizations as they are worth $40 billion and also make an annual revenue of $4 billion also.

The Episcopal church separated from the Church of England after the American revolution. Founded in 1785, this religious movement sees itself as protestant and even catholic. Their priests and its clergy don’t swear allegiance to the Queen of England or the Archbishop of Canterbury.

Its current primate is Michael Curry and this church’s headquarters is in 815 Second Avenue, New York, United States. The Episcopalian church has more than a million baptized members and dioceses in countries like Micronesia, Taiwan, South America and even in Europe. Most of the members of this church as extremely wealthy too.

These are Christian religious bodies that opposed the Papacy and the Roman Catholic teachings. They center their belief system on the word of God contained in the Bible, denying all other additions made by the pope.

As at today, there are more than 30,000 protestant denominations scattered round the world. In fact, their history can be traced to Martin Luther in 1517 when he spoke again the Holy See. In terms of accumulated wealth, they too are ranked among the top.

Sometimes it can be difficult to know which church is the wealthiest between the Catholic church and protestant movement. This is because the protestant churches have schools, buildings, hospitals and other assets worldwide that runs into billions of Dollars.

Most of the richest pastors in the world today are from the Pentecostal churches. These are the modern day churches that sprang up and have various teachings that borders more on prosperity. The likes of Bishop T.D Jakes, Joel Osteen, Bishop David Oyedepo, Creflo Dollar, Benny Hinn are just but a few preachers under this movement.

Infact, the name of the richest pastor in the world is David Oyedepo, a popular Pentecostal pastor worth over $150 million. He is also a Nigerian and according to Forbes list, he has various investments, schools, companies and his church Living Faith Church Worldwide, popularly known as Winners Chapel is among the biggest in the world

While they still preach Christ, the assets of these Pentecostal churches put together runs into billions of dollars as they operate expensive budgets, have private jets, businesses and also run televangelical ministries. Some notable Pentecostal churches under this religious organisation include: House of Potter, the Redeemed Christian Church of God, Winners Chapel, etc.

This church doctrine mixes science and spirituality together and focuses more on the living than heaven and hell as most religions do. Located at Gilman Hot Springs, California in the United States, the church of Scientology started in 1953 and has since grown to be one of the richest religious organisations in the world. It has over ten to fifteen million members worldwide.

The church’s assets has surpassed the $1.3 billion mark and this religious group make money through their scientology courses. The church also remits about 10% commissions to its recruiters. These people are known to recruit new members to the church.

This church broke away from the Anglican Communion and occupies a spot among the richest churches of the world. The Episcopal Church was founded in 1785 and it’s doctrine is based strictly on the death, resurrection and life of Jesus Christ. With over 1.6 million active members recorded in the United States alone, the population of the Episcopalian church has grown to an impressive 90 million worldwide.

The financial worth of the Episcopalian church isn’t documented but with its growing numbers of parishes and missions world wide, it is said to be within the $1 billion range.

Freemasonry is an old occult that began in 1717 with the establishment of the Grand Lodge in England. This religious organisation has almost all the world’s richest men and billionaires as members, and it is said that they control and dictate the political and economic will of most countries.

Majorly, the Masons claim they operate on the idea of making good out of its members. The brotherhood or freemasonry was only opened to men in the past. It was in 1908 that the first female lodge was accepted. The Free Masons are known to control lots of resources, having occult and magical powers, secret rituals and styles to boost their ranks among the ten richest church organisations on earth.

They have universities, schools, hospitals and other institutions which make up most of the church’s assets. The church has one Anglican bishop and one Lutheran bishop. This enables the two share duties in overseeing the activities of either side of the church members.

Among all these churches, which is the richest religious organisation in the world in terms of assets, investments and even cash. We shall answer that question in the paragraph below, providing evidence and proof to support our claim.

Which Church Is The Richest In The World 2022?

It is worthy of note that the Catholic church is far richer than several countries and has been in existence since the time of the Apostles. In fact, all other churches in Christianity trace their roots from the Catholic church and she also has the largest congregation world-wide.

History of the Catholic Church

The Catholic Church traces its origin to the time of Jesus Christ and his apostles. After he appointed his 12 apostles, Jesus sent them to preach the gospel to the ends of the earth. Out of the twelve, he appointed St. Peter as the first Pope and told him to lead his flocks (Christians). Since the appointment of the first pope, St. Peter till date, the church holds the authority to make laws that govern the activities of the whole Christian faith.

The Catholic Church tradition teaches that it was during the time of the Pentecost when the Holy Spirit came upon the apostles that the church’s ministry began in earnest. Catholics believe that Saint Peter was the first bishop of Rome and he laid hands on Linus to be his successor, thereby continuing the unbroken line till the current pontiff, Pope Francis who is the 266th Pope of the Catholic church and sovereign of the Vatican City State.

Today, the Catholic church holds the highest population in Christendom and is also the wealthiest religious organisation in the world surpassing all other denominations such as the Church of England, The Church of Jesus Christ of Latter-Day Saints, Pentecostal and Episcopal churches. She has more than 3000 dioceses in almost every continent and can be found in every country of the world.

The wealth of the Catholic Church is believed to be worth more than $100 billion dollars. This has been argued as some scholars believe that it is impossible to calculate the treasures of the church due to the fact that the Catholic church has hidden treasures, artifacts, valuables and other ancient collections that most people don’t know about.