This brand of generator, Jubaili Bros is one of the most used generator brands in Nigeria. This is an international company that is one of the leading diesel generator suppliers and manufacturer in the world. The company serves lots of its customers throughout the Middle East, Africa and Asia from 9 countries. Jubaili Bros has about 28 branches & service centers which are located in their serving countries: Nigeria, Lebanon, UAE, Afghanistan, Kuwait, Ghana, Qatar, Uganda and South Africa. Here, we will look at their generators that are available in the Nigerian market. From this we will highlight their current prices today. 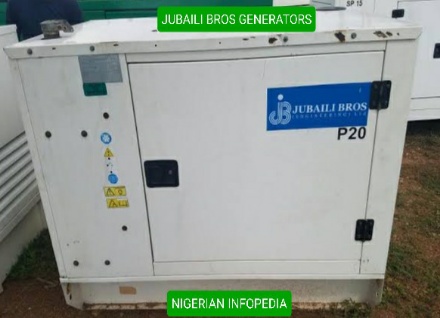 Jubaili Bros is a prominent brand when it comes to top quality heavy-duty generators in Nigeria. This is one of the first names that to mention when dealing with generators of this kind. The Lebanese company deals in soundproof and fuel saving diesel generators that work perfectly on standby mode in your usage. Some people, not just one, love their nature of generators. This is due to the fact that their generators are highly favored by individuals and businesses that want efficient generators. This connotes good generators which are cheap to maintain, not noisy, and highly functional and lasting in all other aspects. Jubaili Bros generators range from 9KVA to 2500KVA in terms of power output. This goes to show that their products can power sophisticated houses and as well businesses, so far you go for a supportive type.

In the other way, the Marapco generators are powered by Perkins and MTU engines. These generators have been designed and tested to the highest international standards which makes the brand stand out. And they have the advantage of being able to withstand different operational conditions. Complementing to these features, of outputs of JET generators, Marapco generators are also available in these higher power outputs: 1100KVA, 1250KVA, 1500KVA, 1710KVA, 1850KVA, 2000KVA, 2250KVA. This line of generator is the higher ones which outputs great power supply which is above that of the JET generators.

Here are some important things you ought to look out for before making a decision on any of these generators:

Where to Buy Jubaili Bros Generators in Nigeria

There are many outfits that has a collection of this brand of generators in the country. The company presently have offices in six places in the country, which includes Lagos (Apapa – Ikeja – Victoria Island), Kano, Port Harcourt, and Ibadan. These offices can get you any of this brand of generator. Moreso, you can get Jubaili Bros generators from online commercial stores like Jiji and Olx.

When making a decision on any of these generators, always know the power the power rating and as well other important variables.