Alhaji Aliko Dangote is one of the movers and shakers of Nigeria’s economy, not just because he’s the richest man in the continent of Africa but because of the diverse businesses he’s engaged in.

Listing the companies owned by this business guru will surely take much of our time. This is because he is engaged in the production of many goods and services that are consumed by both the poor and the rich in all the states of the federation and beyond.

Talking about his foodstuff-producing sector, his foodstuffs products are one of the best-selling commodities in Nigeria.

Dangote’s Tomato pastry, and Pasta (widely known as Dangote Spaghetti) are listed as one of the best quality products among many competitors.

Dangote’s sugar producing sector is also doing fine in the market, only few of its competitors can match the level of success it has recorded since its existence.

Dangote cement prices in Nigeria currently — Our focus for today — is definitely the most sought-after cement among many building companies and large numbers of unaffiliated building contractors. 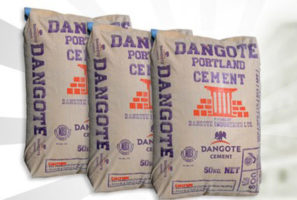 Dangote cement is made from the best available materials such as limestone and other adhesive substances; hence, it provides you with an assurance that your building will stand the test of time  — as long as you apply the cement in the right proportion.

Are you planning to lay foundation for your building; Or are you a contractor who is set to embark on any construction projects? You are advised to go for Dangote cement because it’s a tested and trusted cement.

What’s all about Dangote Cement Plc?

Dangote cement PLC was incorporated in 1992 in Kogi state but wasn’t known as Dangote cement as at that time, it was referred to as Obajana cement.

However, the name was changed from Obajana to the wide-known Dangote cement PLC in 2010 and has since become a household name among cement manufacturing companies across the whole of Africa.

The company now has its headquarters in Lagos due to the state’s commercial activities. It also has  a large number of plants across the country and beyond.

There is a $1billion-rated cement plant in Ibese, Ogun state, southwestern part of the country. This plant produces nothing less than 6million metric tonnes per annum.

There is another Dangote cement plant  in Gboko, Benue. This plant can boast of 10.25 million metric tonnes in a single year.

As for the plant in Obajana, Kogi state; At least 4million metric tonnes of cement are being produced on annual basis.

According to Wikipedia, this company produces nothing less than 17 million metric tonnes of cement per year and there is every tendency that it would be more by the end of this year.

Unlike many cement companies that only deals with the production of cement, the company specializes on the production, packaging, marketing and distribution of their products to all nook and cranny of the country.

This division of labour turned out as a massive source of job opportunities to many young Nigerians who are willing and ready to be gainfully employed.

According to a reliable source, not less than 6,000 Nigeria youths work with the largest cement producing company in the whole of West Africa.

Since its change of name in 2010, Dangote cement PLC has reached a great height which will take other companies many years to attain. This lead us to some of the mouthwatering achievements recorded by this group in just less than two decades.

Below are some of the achievements made by the company in recent times:

How To Become Dangote Cement Distributor in Nigeria

Becoming a Dangote cement distributor is a simple task to achieve, as long as you have the required criteria.

Before submitting any application or request form to the company, you must ensure that you have a very conducive warehouse where you will store the cement.

You must be financially buoyant enough to buy a truckload of the cement that contains 600 bags.

Once you have the two important criteria, then, you can proceed with your application by ensuring the following procedures

The needed documents are listed below:

It is important you know that all of these documents must be scanned before submission.

Submit the listed documents to [email protected] and promptly wait for reply from the company’s representative.

Current Prices of Dangote Cement in Nigeria this 2022

Dangote cement prices according to sizes is a bit expensive at the moment, no thanks to the country’s fluctuating economy, and consumers’ lack of patronage due to harsh financial situation the country finds herself.

However, the good news is that Dangote cement are easily seen at every market that specialize on building materials, so it won’t be difficult for you to get this commodity.