If you want to know how much crayfish is sold in the Nigerian market today, we have covered it extensively in this write-up. Crayfish is one of the food ingredients that can’t be omitted when cooking. It is a common delicacy in the diet, especially among the people of both eastern and southern Nigeria. This kind of water living organism is naturally a small aquatic specie that lives in rivers and is similar to a lobster. The most important thing about crayfish is that its flesh is eaten as food, and to this has made this aquatic sea animal to be sourced by a lot of people. This article will be explicit on the current price of crayfish in Nigeria today. We will also cover the availability and where to always source crayfish in the country. 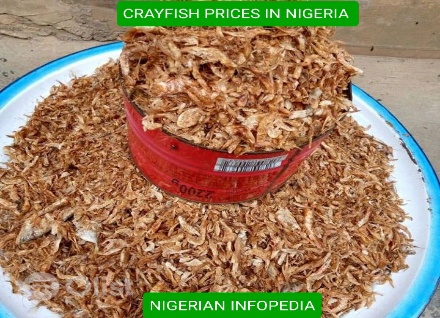 A crayfish is a nocturnal freshwater crustacean that resembles a small lobster. This small animal normally inhabits in streams and rivers, which make it to be more predominant in the coastal southern part of the country. The Nigerian crayfish (Procambarus clarkia) is just like others, and it is one of the nutrient dense, economical and aquatic animals’ products which is a dominant decapod in many freshwaters in the country. Crayfish always live in freshwater which makes them more prominent in lakes, rivers and the outermost part of oceans. The main habitats of crayfish are cool or warm high-quality streams and lakes, warm lower quality wetlands, semi-terrestrial swamps, among other places. Nigerian crayfish may also be available at all the seasons, relatively cheap, affordable and suitable to supply adequate nutrients to the body.

PLACE WHERE TO SOURCE FOR CRAYFISH IN NIGERIA

As we all know that crayfish is a freshwater produce that isn’t available in all parts of the country. Though the produce is consumed by all and sundry, but when intending on buying, you should always go to the producing areas which will offer the best options in a good price. To give you a guide on this, we  highlight the top places where you can source crayfish in Nigeria.

CURRENT PRICES OF CRAYFISH IN NIGERIA (2021)

The cost of crayfish is not that expensive, but the cost depends on when and where you buy the produce. Normally, crayfish are always available in all seasons, but there is a difference in the quantity that would be obtained in the two seasons. The dry season, especially from December to October is the ideal time to source for crayfish in the country. But you should be aware that the prices of this commodity will be elavated around the festive December period, which the sellers will be hoping to make the best sell of the season. In the other way, the place you buy crayfish will certainly influence the price of it. Preferably, if you want to buy this commodity outside consumption (i.e. on a large scale), then it’s best you go to the production areas and source them. Some prominent market in Oron and Ibeno can give you the best on this.

Nonetheless, crayfish in the country may also be available at all the seasons, relatively cheap, affordable and as while nutritional for the body. Crayfish are available in different grades and sizes depending on your choice. There are the big, small and medium ones which all differ in the cost. Usually, the most commercial ones are the medium crayfish which is less than 1 inch long. Without exercising much on the nature of crayfish, let’s go into the main thing. Here we will take a gander at the current price of crayfish in the country; and also their pricing per the quantity.

On the price of crayfish in Nigeria, one full bag on wholesale of it will cost from ₦50,000 to ₦65,000. The medium size crayfish will go for about N30,000 in the producing areas, but the pricing will change in other areas. Also, the average or small size bags of crayfish which is usually on retail, will cost around ₦8,000 to ₦15,000. You can also find the smallest of it around ₦3,000 to ₦5,000 which usually sold by the retailers.

It’s important to note that this pricing is based on what’s obtained in the producing areas like Akwa-Ibom, and the cost will certainly increase for other states and areas. Nevertheless, if want the best options in getting the ultimate buy, do go to these areas where the produce is available in commercial quantity at a considerate price.

According to one of our readers involved in the crayfish business, below are the recent prices of crayfish in the country today.

There are many benefits of crayfish to the body which includes: having good iodine content, boosting of energy level, treatment of inflammation, promoting healthy joints, improving vision, and brain development. All of these and many others has made crayfish to be ideal for a lot of people in Nigeria. This article outlined the price of crayfish in the country. This will help you to know what to budget for in buying this food commodity. This article also covered the best places to source crayfish and their prices in the country.