A recent survey report showed that Nigeria produces palm oil in commercial quantities and contributes 7% of the total output in the world. With this significant figure, there are some states that contributes greatly to this feat. Though palm oil is produced in more than half of the states in the country, but these ten are seen as the main producers of this cash crop. 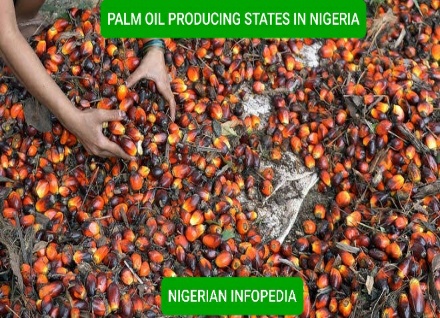 While the Niger Delta region is known produce crude oil in large quantity, some of these Nigerian states where palm oil production is highest are also from that region due to the kind of farm lands these states have. Today, Nigeria ranks as the fifth highest producer of palm oil worldwide, with Indonesia, Malaysia, Thailand and South America’s Colombia, above the country that has the world’s largest palm oil production.

Nigeria still remains a top player in palm oil production at the international scene, even though crude oil has become the bedrock of the country’s economy. We highlighted in this write-up the highest palm oil producing states in the country this 2022 that ensures that this agricultural produce doesn’t go extinct.

In Nigeria, the major oil palm producing states include: Akwa Ibom, Cross River, Rivers, Abia, Edo, Ondo, Imo, Delta, Bayelsa, and Anambra states respectively. To be more explicit on this, we will highlight these major palm oil producing states, including their production outputs and how they setup plans to augment from their current rank.

The list below shows the rundown of the top ten highest palm oil producing states in Nigeria as at today;

This is another top palm oil producing state in the country. The State Government has put much efforts in giving the state a name on the oil palm industry. Recently in 2018, the President of Calabar Chamber of Commerce, Industry, Mines and Agriculture, Mr. Eta Ndoma-Egba said that as at that year, Cross River State produced over 200,000 mt tons of Palm oil an had over 360,000 hectares under oil palm cultivation. He also stated that over 18,000 farmers (mostly locals) were involved in the process.

On the same note, Cross River is a state in South South Nigeria. The state is located in a tropical vegetation which greatly favors palm oil production. On area, it is bordering Cameroon to the east. Its capital is Calabar and its name is derived from the Cross River, which is the major river in the state.

Rivers State is another coastal state in the rundown of the largest palm oil producing states in Nigeria. The state is the sixth-most populous state in the country.  Aside from this, the riverine state is also populous in oil palm production. Palm oil is one of the most common products used by almost everybody in the state. Major palm oil producing areas in Rivers State Ikwerre and Etche Local Government Areas. But the crop is also grown in commercial quantities in all local government areas of the state. Rivers State is also one of the major oil and gas producing states, being bettered of by neighbouring Akwa Ibom state.

Abia is the leading producer of palm oil in the south-eastern part of the country. The state is very significant for this, as a data from the state’s ministry of agriculture indicates that Abia produces 190,000 metric tonnes of palm oil per annum; 235, 000 tonnes of palm kernel and 175,000 of palm kernel oil. This has contributed greatly to the states position as the fourth largest producers of palm oil in Nigeria. Aside from palm oil, other crops do very well in the state, and the commercial ones include, in the order of quantity and economic importance: palm produce, cashew, cocoa, rubber and plantain.

Ondo is a State known for being top in the production of agricultural produce. Presently, the state leads the chart of the largest producers of cocoa in the country. Ondo is a state created on December 3, 1976, from the former Western State. Akure city is the state capital. Ondo is Nigeria’s chief cocoa-producing state and much of the state’s revenue is generated from agricultural produce production. Other cash crops grown in the state include rice, yams, corn (maize), coffee, taro, cassava (manioc), vegetables, and fruits.

Imo is a south-eastern state, and has a capital in Owerri city. The state is also one of the largest palm oil producing state in the country. Much is credited to efforts by the State Government in making this. Recently in the year 2019, farmers in Umuehihe Village in Okwu Ikeduru Local Government Area of the state, were provided with a palm oil processing factory. This and many other initiatives have been pivotal to the production of palm oil in Imo state.

Delta is one of the major states where palm oil is produced in Nigeria. This is greatly influenced by the supportive vegetation and the efforts of both the government and the farmers involved. The state has a 1.2 million hectares of oil palm plantation. This project was supported by the Central Bank of Nigeria Oil Palm Development Initiative, and it aimed to increase wealth and promote economic growth in the state.

Palm oil industry has continued to play an essential role in the Nigeria economy by giving a substitute to the moneyed natural resources. Bayelsa state is also known for palm oil production. The state has a oil palm mill, WJICY is the only semi-mechanized mill operating in state. Besides this, other efforts are put into positioning the state as the largest palm oil producing states in the country.

Anambra also make up the list of the top states that produces palm oil in Nigeria in commercial quantity. The state is an agricultural state and a lot of produce is made on this. There are thousands of hectares of land being used for the production of this commercial cash crop in the state. Anambra state is located in the tropical rain forest vegetation which also favors the production of palm oil. Efforts of the farmers involved and the Government initiatives has made the state position as one of the largest producers of palm oil in the country.

Palm oil is one of the most important economic cash crop in Nigeria. The production of palm oil serves as a mean of livelihood for many rural families and it also serves as an income generator to the government. Oil palm industry is quite lucrative and generally has different applications. Oil palm products have varied uses: from the cleaning agent, in baked goods, cosmetics, confectionery, shampoo, toothpaste, and washing detergents, down to it primary use as cooking oil.

That’s the size of this write-up, as we have been more explicit in highlighting the top ten highest palm oil producing states in the country.