Oyo is the ‘pace setter’ state, and one of the thirty-six states in Nigeria. In this write-up, we’ll take a gander about Oyo state, outlining the local government areas and towns in them. 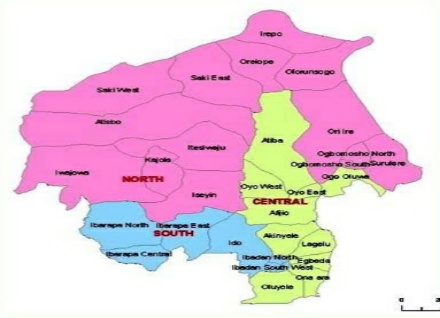 Oyo state was created in 1976 from the then Western region, and got its name from the old Ọyọ empire. Situated in the central western part of Nigeria, Oyo state covers a total of 28,454 square kilometres of land mass and it shares common boundary in the south by Ogun State, in the north by Kwara State, in the west it is partly bounded by Ogun State and partly by the Republic of Benin, while in the East by Osun State.

Yoruba ethnic group make up the majority of Oyo state population, with other residents groups and foreigners. With respect to religion, the state has a rational number of Christians and Muslims. Oyo State is one of the most visited states in the country. Major tourist attractions located in the state include: the Old Oyo National Park, Agodi Botanical Garden, Ado-Awaye Suspended lake, Mapo Hall, University of Ibadan Zoological Garden, Ido Cenotaph, and the Trans-Wonderland Amusement Park are all situated in the state.

List of Local Government Areas and Towns in Oyo State

Atisbo Local Government Area of Oyo State is headquatered in Tede town. Other notable urban areas that make up the area include: Ago Are, Irawo, Sabe, Tede, Baasi, Ofiki, and Owo.

Ibadan North LGA of Oyo State is a prominent urbanised local government area. It is headquartered in Agodi, a notable town in the area. There are many urban areas in the LGA, and the wards include: Ward I N2, Ward Ii,N3, Ward Iii, N4, Ward Iv, N5a,Ward Ix.

Ibadan Northwest is another local government area in Oyo State. With an administrative headquarter in Onikere town, other major towns of Onireke, Ayeye, Dugbe, Inalnde, Ologuneru & many other remote villages make up Ibadan Northwest LGA.

Ibadan South East is one of Oyo State local government areas. It has an administrative headquarters located in Mapo town. Notable urban areas here include Mapo and other twelve wards.

Ibadan South West is one of the Local Government Areas of Oyo State. Headquartered in Aleshinloye town, it has about eleven council wards. Notable urban areas here include: Awodife, Bode Oluyole, Osi, Aleshinloye.

Iseyin LGA of Oyo State has it administrative headquarter in Iseyin town, where the area got it name from. Notable urban areas in the area include the following: Ado Awaye, Osogun Aagba, Aba Nla, Aba Tapa, Abapan, Abidioki, Aboriso, Abule Nla,Abule Oloola,Adeagbo, Adegbola and Adekola.

Lagelu LGA is one of the Local Government Areas in Oyo State. It has an headquarter in the town of Iyana Offa. Notable urban areas in Lagelu LGA include the following: lalupon, Lagun, Monatan, Ofa, Ejioku, Oyedeji, Kelebe, Sagbe, Elegbaada,Olowode,Wofun, Ogburo, Kutayi, Apatere and Olorunda.

Ogbomoso North LGA is a remote area in the state. It is one of the urbanised local government areas in Oyo state, and has an administrative headquarter in Kinnira town, consisting of other towns, wards and districts of Aaje Ogunbado,Oke Agbede, Abogunde, Aguodo, Masifa,Isale Afon, Isale Alaasa,Isale and Ora/Saja.

Oyo state is arguably the centre of educational institutions in the country. Nigeria’s first degree awarding institution, the University of Ibadan was founded in 1948, and is situated in Oyo State. Many other notable institutions in the state are: Lead City University, Ibadan, Ajayi Crowther University, Oyo, Kola Diasi University, Ibadan, Dominion University, Ladoke Akintola University of Technology , Ogbomoso, The Polytechnic, Ibadan, Oyo State College of Agriculture and Technology Igbo Ora, Adeseun Ogundoyin Polytechnic Eruwa, and the host of other colleges, universities and polytechnics are in Oyo State. Complementing to these institutions, there are more than 324 secondary schools and 1,576 public primary schools in the state.

This article covered the list of towns and local government areas in Oyo State, so as to give you a clue on where to visit in ‘the pace setter’ state.