Osun is one of the Yoruba states in Nigeria. Osogbo city, the state capital is a notable urban area, with Ile Ife, Ede and Iwo towns also making up the state. This article lists all local government areas and towns in Osun State. 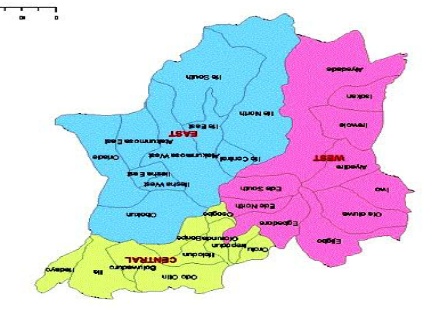 The state’s name ‘Osun’ is derived from the River Osun, which flows through the state. Osun State was created on June 27, 1991 by the then regime of General Ibrahim Babangida, after it was carved out from Oyo State.  It’s capital Oshogbo is seat of the state authority. Osun state occupies an area 9,251 square kilometres. It shares common boundary with Kwara state to the North, Oyo state to the West, Ogun state to the South and Ondo and Ekiti states to the East.

The Yorubas are the major occupants of Osun State. These people trace their origin to Oduduwa, and Ile-Ife town is an important area to the ethnic group.

List of Local Government Areas and Towns in Osun State

ALSO READ:  The Lyrics of The First National Anthem of Nigeria

Ife Central LGA is a prominent Local Government Area in Osun State. It has an administrative headquarter in the historic town of Ile Ife. Notable urban areas in the area include: Ilare, Iremo, Moore, Ojaja, Akarabata, Aba Coker, Eleyele, Ilode, Okerewe and Opa.

Ife East LGA of Osun state has its administrative headquarter in Oke-Ogbo town. There are many other towns in the area, which include the following: Okerewe, Yekemi, Ilode, Moore and other urban areas.

ALSO READ:  How To Become An Online Teacher in Nigeria (2022)

Ola Oluwa LGA is a local government area in Osun state named after God. It has an administrative headquarter in Bode Osi which is one of the towns that made up the LGA, others includes Ajagba/Iwo Oke, Asa/ajagun-lase, Asamu, Isero/Ikonifin, Obamoro/Ile-Ogo, Ogbaagba, Telemu.Iloba, Iwo Oke, Jagunode Ofa.

Osogbo LGA is the capital local government area in Osun state. It is the most developed area in the state, and has an administrative headquarter in the central part of the city. Notable urban areas in Osogbo LGA include the following: Aiyetoro, Alekuwodo, Dada Estate, Fagbewesa, Idi Seke, Ata Olokan, Kola Balogun, Odiolowo, Ogooluwa, Oke Oniti and Okefia.

The local government areas and towns in Osun state have been dully highlighted above. Moreso, Osun is notable for it rich cultural heritage which is obvious in their music, art, dances, dresses and cultural festivals. Talking drums and bata music is also attributed to the state. We believe you now know the urban areas to visit in the ‘state of living spring’.