This article is about the biography of Omoyele Sowore and his net worth, founder and owner of Sahara Reporters, an online medium that can be controversial at times.

Omoyele Sowore was born into a polygamous family of sixteen siblings. He developed his passion for the media in the days of military rule in Nigeria. According to him, the vibrant criticism from the media then towards the ruling government gave him a sense of direction of what he wanted to do.

So, when he left Nigeria in 1999 for the United States for proper treatment after the cultists’ attacks, he knew he would not stop serving his fatherland. In 2006, he founded Sahara Reporters in a small room in Manhattan.

It was not until 2006 that Sahara Reporters became an international household name as the first news source to identify and publish the photo of  Umar Farouk Abdulmutallab. Since then, it has published over 5,000 stories and has a massive followership within and without Nigeria.

Though Sowore practices his citizen journalism in New York where he is protected by the First Amendment Rights, he receives several news tips and beats from even reporters in Nigeria whose editors are afraid to use their controversial stories. He “resumes” work by midnight, New York time, when many Nigerians are already up and about.

How it all began

The fiery activism of this man in his 40s got national prominence between 1992-1994, when he led the Students Union Government of the University of Lagos. When his mates chose the glittering broad way of life, he combined his Geography lectures with a firm determination to put a stop to cultism in the university.

As is expected in every life situation, his adversaries could not bare his torture anymore and chose to put a stop to him. It is alleged that on a fateful day in 1994, some of these cultists came in their number to beat, torture, strip Unclad and inject him with lead.

Those whose ox have been gored have not failed to threaten Omoyele and his team. He explains that it is for this reason he sometime does not publish evidence or names of the reporter so that the well-meaning person will not be traced and unjustly punished.

To be able to thrive with its increasing growth rate, Sahara Reporters is supported by grants donated by the Ford Foundation and the Omidyar Foundation. Contrary to what many might think, the name “Sahara” was given based on a passionate drive to kick up a storm in Nigeria, not based on a geographical location.

On the side, when he is not revealing some hard truths about the Nigerian government, Omoyele is teaching in School of Visual Arts, New York or giving a talk somewhere. Currently, it is said that Sowore wants to contest for for the presidential race.

However, that story, as with many others concerning Omoyele, has been met with a lot of controversies. Many claim that Omoyele was actually a brutal cultist fighting other rival cults with his SUG sit-tight presidency. It is said that it was when these rival cultists felt they had enough of his troubles that they attacked him while he was attacking another cultist. Those who validate this report opine that lead cannot be harmful except given in large quantities. Hence, the cultists could not have injected him with lead if they really meant to do him harm.

Still on the controversies, many have also said that Omoyele’s Sahara Reporters is a strong media tool used by Omoyele to extort money from politicians. They also say that he is in the pockets of some political officers who have given him cash or kind to ridicule their rivals on his online platform.

One of the most popular controversies is that it was alleged that Omoyele received a huge gift from sitting President Mohammed Buhari to ridicule former President Goodluck Jonathan during this year’s election campaigns.

The issue of Dino Melaye, an outspoken senator in Nigeria who was alleged of not attending ABU Zaria by Sahara Reporters are just but a few controversy Sowore is involved with.

Sahara Reporters website is said to be worth $10 million currently. Sowore is also a wealthy man and he is happily married to a wife with children.

The movement of Omoyele Sowore for President has become the talk of the town as the media icon is determined to unseat the Buhari APC led administration from power in the next year elections. He has moved his campaign train to gather supports from different states in the country like Lagos, Abuja, Kaduna, Kano, etc. 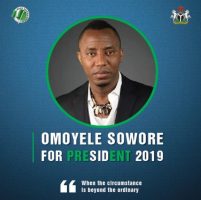 When he came to Lagos, Sowore was arrested after speaking to the youths at shoprite but was later released that night. He has since organized series of town hall meetings where ever his presidential campaign train went and has seeked support from prominent Nigerians like Wole Soyinka, Emir of Kano etc as he is determined to become Nigeria’s next president.

As of writing this post, Sowore has been arrested by the DSS because of a planner protest he wanted to carry out all over the country. He was recently released but reports reaching us is that he was re-arrested again by the DSS, even after the court granted him bail.

Sowore was arrested by officers of the State Security Service (SSS) for calling for a protest against the Buhari-led Federal Government due to it’s perceived corrupt practices. The protest which he tagged as “Revolution Now” was viewed by the FG as a treasonable felony.

According to the prosecutor in charge of his case, he was charged with trying to overthrow the administration of President Muhammadu Buhari and also on crimes related to money laundering and cyber-stalking.

The court granted Sowore bail, but he was held in detention by the Federal Government. This was viewed by the public and international community as snubbing court ruling.

Again, despite a Federal High Court in Abuja granting Sowore bail, members of the DSS stormed the Court while he was on trail, halted proceedings and bundled Sowore out.

It was pressure from the international community which saw Sowore released by the Attorney General of the Federation and Minister of Justice. Malami ordered the State Security Service, SSS or Department of State Services, DSS to release him on bail.