With Ogun state being an economic hub in Nigeria, there are many industries located within. There are also many urban centres in this state. This article will outline the notable towns that are situated in Ogun state local government areas. 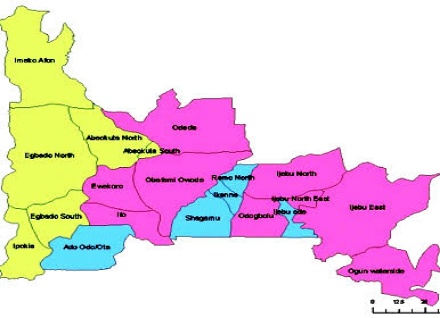 The state got its name from the Ogun River which runs across it from North to South. It became a state in Nigeria on the 3rd of January, 1976, when it was exised out of the old Western State of Nigeria. Abeokuta is the state capital and the largest urban centre in Ogun.

Ogun state borders Ondo State to the East, in the North by Oyo and Osun States and in the South by Lagos State and the Atlantic Ocean and in the West by Republic of Benin. Yoruba ethnic group makes up Ogun State, and it is predominantly occupied by the Egbas, Ijebus, Yewas, Remos and Aworis who belong to the same ethnic group. There are also other sub-groups, like, Ketu, Ikale, Ilaje, Ohori, Anago and Egun which are also found in the state.

In recourse to natural resources, Ogun State has an abundant quantity of it which include forest and water bodies as well as large quantities of mineral deposits, such as limestone, phosphate, granite stone, gypsum, bauxite, bitumen, feldspar, clay, glass sand, kaolin, quartz, tar sand, gemstones and crude oil.

List of Local Government Areas and Towns in Ogun State

There are twenty (20) LGAs in Ogun State. With Abeokuta the state capital being the major city in Ogun State, other towns like Ijebu, Otta, Illaro, Sagamu and Itori still make up.

ALSO READ:  List Of All Yoruba States in Nigeria

Below is the comprehensive rundown of the local government areas and towns in Ogun State;

Abeokuta South LGA is one of the renown areas in Ogun State. With an headquarter in town of Ake Abeokuta, other notable towns and districts include: Abese, Abesin Isale, Abesin Oke, Abomolaso, Abule-Aje, Abule-Oke, Adeku and Afonja.

Ado-Odo/Ota LGA is a notable local government area in Ogun State. Headquartered in the industrial town of Ota (or Otta), the area comprises of number of towns which include Ado-Odo, Agbara, Igbesa, Iju-Ota, Itele, Kooko Ebiye Town, Owode and Sango Ota.

Ifo LGA is a local government area in Ogun State. Ifo town, which the area got it name from, is the headquarter of Ifo LGA. Other urban areas here include: Akute, Agbado, Ifo, Ojoolu, Abeloju, Jagunna, Lerin, Pakoto and Alapoti.

Ijebu-East LGA is one of the twenty local government areas in Ogun State. It has an administrative headquarters in Ogbere town, with other major towns and districts like Fetedo, Ogbere, and Ojowo.

Ikenne LGA is a local government area in Ogun State. It has an headquater in Ikenne town. Other major towns in the area include: Iperu, Ilisha, Ogere, Irolu, and Ikenne.

Ipokia LGA which has an headquarter in Ipokia town, is one of the twenty local government areas in Ogun State. The list of some notable towns and villages in the area include Aseko, Ihunbo, Koko, Oniro, Tongeji, Alaari, Madoga, Idiroko, Ita Egbe and Agosasa.

Obafemi Owode LGA is one of Ogun State local government area. Having its headquarters in the town of Owode, there are other urban areas in Obafemi Owode LGA. They include the following: Obe, Odekunle Abatan, Odeyemi Olugbo, Odi, Oduroye, Oluwo Ifote, Oniworo, Oseni Kehinde and Osiele Sanya Akiloju.

Odeda LGA is a local government area in Ogun State. It has an administrative headquarter situated at the town of Odeda, consisting of other towns and urban areas which include Ogboye, Ogeleje, Ogunbayo, Oluga, Olugbo, Rogun Rogun, Sokan, Agbe, Baagbon, Bangboye, Ego and Fagbemi.

ALSO READ:  Types of Leave in Public Service in Nigeria

Ogun Waterside LGA is one of the notable local government areas in Ogun state. It has an administrative headquarters in Abigi town, with other notable towns, villages and districts like Agbede, Agbure, Agerige, Agilla, Agodo, Aiyede, Aiyesan, Ajegunle, Apata, Araromi Odo, Araromi Oke, Arokola, Ayetunmara and Bolorun Duro making up.

Yewa South LGA is one of the prominent areas in the state. It has an administrative headquarter in Illaro, a popular town in the Ogun State. Several other towns like Ifeko Wajo, Ilaro, Abu, Abule Abu, Abule Ademola, Abule Ajayi Odi, Abule Akegbo, Abule, Debo, Owode, Owo, Sabo, Yakata, Onijam and Saabe are in the area.

When considering industry and economic activities, Ogun state is one of the leading states in the country. It has one of the largest concentration of industries in the country. All these is credited to its network to Lagos and other international places like Benin Republic. Olomo Rock in Abeokuta is one of the tourist attractions in Ogun state, and the state has many other river estuaries. To complement all these intriguing facts, this article outlined the list of towns situated in the twenty local government areas of Ogun state.