Barcelona players are known to be great footballers in Europe. It is normal for a club like FCB to sign new players every season and so are they are always gearing big for new signings at the club. The likes of Neymar, De Ligt from Ajax were all linked to the club but we will keep our ears open to any of these top players arriving at the club.

Good news is that Barca have secured the services of three players, De Jong from Ajax and Griezman from Athletico Madrid this transfer period. Some players within the Barcelona squad have left the club such as Coutinho (loan), Alena (loan) and Cillesen.

Barcelona were already through to the semi-finals of the UEFA champions league season 2018-2019 after thanks to Lionel Messi’s master class but Liverpool did the damage.

Here we expose the wages that Barcelona players receive on a weekly to yearly basis. This is because, contracts being signed by both football player and club must be respected. Therefore, salaries must be paid. 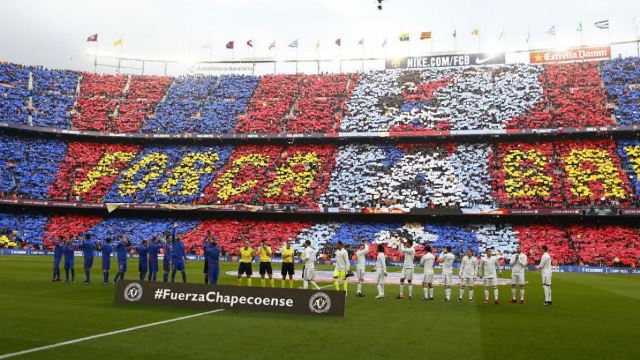 Apart from Real Madrid, FC Barcelona is the second richest club in the world and also the most successful in this era looking at how many trophies they’ve carried both in the Spanish La Liga, World Club Cup, Champions League and others.

ALSO READ:  Most Successful Nigerian Athletes of All Time

They also have within their squad, the greatest player in the history of football, Lionel Messi who has racked up six (6) Ballon D’ors and the most potent strike force in football.

FC Barcelona squad contracts and salaries are not as large as you might think as they only pay most of their top players than the rest.

Barcelona are known to nurture youngsters through their La masia academy into the first team just like they did Lionel Messi, Pedro, Cesc Fabregas, Iniesta, Pique e.t.c.

FC Barcelona generated record $688 million in yearly revenue according to last business cycle and in the process they overtook Real Madrid as the most valuable team in the world only behind Manchester United.

Unlike the previous few seasons Barcelona have not been very active in the transfer window but after but they want to sign back Neymar Jr from PSG after the likes Philipe Coutinho and Ousmane Dembele didn’t live up to expectations.

It is being rumored that Neymar will also sign for the club but players have to be sold in the summer to free up spaces and meet the FIFA financial fair play rules.

The following are some potential Barca signings

Even with players leaving, the wage bill of Barcelona is going increase going into the 2019/20 season as Messi signed a new record deal and combine that with potential signing Ousman Dembele where Barcelona will have to hand them massive contracts to ensure their transfers.

Below are FC Barcelona’s squad, their current contracts and salary list this 2023

Lionel Messi has recently agreed to a contract extension with FC Barcelona to stay till 2023. He now earns £615,000-a-week which makes him the highest paid footballer in the world and the highest on FC Barcelona players salary list.

The likes of Suarez and Sergio busquets have extended their contracts with FC Barcelona.

Iniesta finally left the club to Japan and Barca has secured the services of Arthur Melo from Gremio and Clement Lenglet from Sevilla FC. There is a slim possibility of Neymar returning to the club.

This list of Barcelona players salaries is dully updated as at January 2023. Neymar left Barcelona for PSG and has his salary per week at £515, 000 which makes him the second highest paid player in Europe and most valuable and expensive football player in the world.

Phillipe Coutinho has joined Bayern Munich on loan and his salary is rumored to be in the range of £200 to £250 thousand per week. Barcelona just sacked Ernesto Valverde and replaced him with former Real Betis manager, Quique Setien.