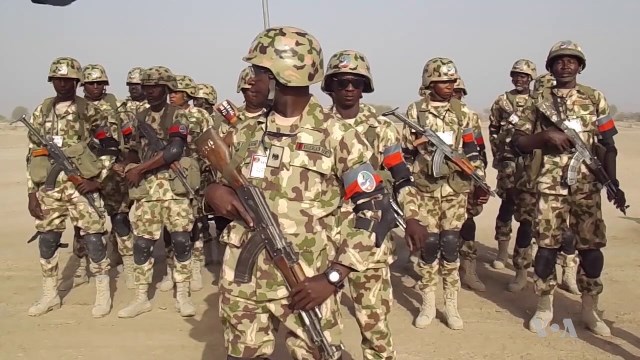 There are 5 types of commission in the Nigerian Army (NA) – Not Armed Forces. They are:

Details of such commissions are to be found in the Harmonized Terms and Conditions of Service (TACOS) for officers of the Nigerian Armed Forces but a summary goes thus: RC and SSC are combatants, trained to fight battles. Others are not meant to be combatants.

Both SSC and DSSC are of relatively short duration (not more than 12 years I think, excluding extension of service) and must convert to RC and DRC respectively to enjoy a longer career. Theoretically, RCs and DRCs can rise to become generals i.e Brigadier Generals, Major Generals etc. Remember the pyramid structure? The higher it gets, the smaller it becomes. In other words, many are called but only a few are chosen.

DRC’s are mainly professionals – surgeons, pharmacists, chaplains, surveyors etc. and are usually not found in the core combat arms of Infantry, Armour and Artillery but are to be found in the Army Engineers and Signals. EC’s are made up of former soldiers and do not usually exceed the rank of Major.

There are varying criteria for the various commissions. In reality, the advantage is more on the side of those who were originally RC,s than those who were originally SSC,s in terms of age, rank in the Nigerian army, numbers etc. However, anything can happen, for instance Lt. Gen. Ishaya Bamaiyi (rtd.) rose to become Chief of Army Staff (COAS), even though he wasn’t originally an RC. Although DRCs may never become COASs or General Officers Commanding (GOCs), they can apart from being Staff Officers also hold command posts in corps or services in which they predominate. These include Education, Medical and Finance among others.

Life in the Army here in Nigeria can be promising, particularly now that efforts have been made to consolidate emoluments, but achievement of success or wealth in the Army (here in Nigeria as well as is in other countries) is a product of motivation and determination. If you want to live well, you will. If you don’t, you won’t. The choice is really yours! For RC or DRC, minimum years of service is about 15 years and life as a cadet can be quite strenuous.

Generally, training is in the Infantry Corps Centre and School (ICCS), Jaji, Kaduna State. As for the DSSs and ECs, their training is usually less strenuous, not as in NDA where RCs and SSCs are trained. Cadets are usually humorously welcomed with the euphemism, “Unfortunate Nigerians, you will nearly die but you will not die!” But you should survive if you are physically fit after all, many have gone before you.

ALSO READ:  Nigerian Army Salary Structure: How Much is a Nigerian Soldier Paid?

As a cadet, you are entitled to allowances which may not really cater for your family if you have one but could go a long way to help you sustain yourself. If you wish to obtain more information on the Nigerian Army and the types of application forms available, you can check with the Army Public Relations Department in any military barracks near you.

For RC, you need at least 5 credits including English and Mathematics. For SSC, DRC and DSSC, you must be a graduate. Lawyers in the army are usually found in the Army Legal Services and the Military Police. They can also be found in lesser numbers in other corps and services. As for your private practice, it all depends on what type but you won’t be expected to have your private practice as a lawyer alongside your military career.