Obudu Cattle ranch is the former name of this resort, the current name being Obudu Mountain Resort. These two names will be used alternatively throughout this article to make it more interesting and fun. Besides, I personally prefer the former name… Sound weird right? Hmm…. Let not dwell on that, read on and get informed about the resort where you will experience nature at it best. 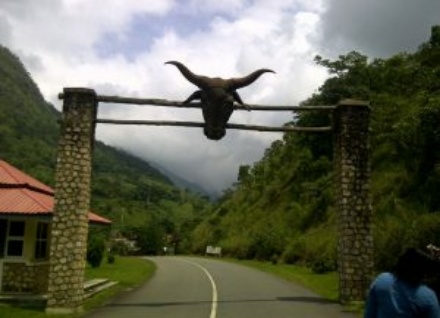 AN OVERVIEW OF OBUDU CATTLE RANCH

Obudu Cattle Ranch is a tourist attraction hub located on the Obudu Plateau (1,575.76 metres) close to the Cameroonian border in Obanliku LGA of the Northern part of Cross River State in Nigeria. Aside being a resort centre, Obudu Cattle Ranch is also a ranching site. This was developed in 1951 by a Scottish rancher by the name Mr. McCaughley alongside a fellow rancher Mr. Hugh Jones and Dr. Crawfeild after he Mr. McCaughley had camped and surveyed the Mountain ranges in 1949. It is currently under the care of African Sun Limited which was the company that changed it name from Obudu Cattle Ranch to Obudu Mountain Resort after taking over operations from Protea Hotels.

The Obudu Mountain Resort is surrounded by 7 villages – Ukwamu, Abayiule, Keyi, Kejukwu, Okpayanga, Kigo and Anape. These villages had lived here for over 4 centuries. Obudu Mountain Resort being the highest point in cross river, the view while there is breathtaking; is it the long winding waterfall, the spectacular grotto – a natural swimming pool with sparkling pure water or the snake-like winding road. Also in this resort, there is a mini golf course and squash Hall amongst other exciting features. The animal lives there embedded into the the green mountain ranges will blow your mind off together with all the great things put in place to make tourist stay there a memorable one.

Since it is a high mountain, the climate experienced in the Obudu Mountain Resort is the semi-temperate mountain climate. During January to January, the temperature of the resort is between 26°C – 32°C and 4°C – 10°C during the month of January to January which happens to be the coldest. It is usually cold in the morning so you need to get cloths that will keep you warm when going out in the morning.

GETTING TO OBUDU CATTLE RANCH

When it comes to getting to the Obudu Cattle Ranch, 2 options are available. You either go via road transport or air transport. Going by road, it is a 5 hours journey from Calabar, the state capital, 3 hours from Enugu, 8 hours from Port Harcourt and 6 hours from Eket.

Alternatively, you can go there by flight owning to the presence of the Bebi Airstrip serving the resort. This Airstrip is located at the foot of Obudu Cattle Ranch. Aero Airline renders passengers scheduled flight to the Airstrip.

At the foot of the Obudu Plateau, you have the option of either going to the resort by either making use of the cable car or going by road. Using the cable car, tourists are transported to the ranch which is a 15 minutes jolly ride from the foot of the Mountain to the top where the resort is located. These cable cars are not actually cars but containers that runs on a cable of 4km which has the carrying capacity of 6 people. As you ascend the Mountain, you get astonished with the snake-like winding nature of the roads, the Green mountain ranges as well as other great views.

Going by road is your other option but why not go using the cable car at least, it an experience of a lifetime. But guess what? It is more adventurous to go by road though I wouldn’t advice hypertensive patients or people with phobias to try this option. It is a meandering 11km road with 20 evil bends that will get a first timer scared. The most scary bend been the devil elbow. On your way to the resort, you will pass through tall, dense forests
where the branches form a canopy that completely shuts out the sun. As the car moves up to the plateau, you will view rolling mountain ranges.

Getting to the gate, you are been welcomed by a cow head at the entrance. The cow head placed signifying what the Obudu Cattle Ranch is.

At Obudu Cattle Ranch, the hotel had invested in a range of exclusive and Standard accommodation depending on your pocket size and class. These ranges from the African huts, the Standard Double Rooms, the Superior Double Rooms, the Club Chalets. Also, Obudu Cattle Ranch Hotel has Executive Suites, the Royal Suites, the Governors lodge as well as the Presidential Villa amongst others. The presidential villa happens to be the tallest so he could have a scenic view of his surrounding as far as Cameroon. It is made up of 8 Chalets for presidential aides being constructed with 100% Seasoned Wood from Finland and a helipad under construction. All the rooms in this hotel are furnished to a high standard with imported furniture and soft furnishings with a range of DSTV channels for entertainment.

When it comes to entertainment, Obudu Cattle Ranch has a disco room, Theatre-styled seating conference room with a capacity of 250 people, the reception foyer, etc.

It is best to book for a reservation a month before you arrive. With the high standard of the accommodation, the price is quite high as it competes with other hotels in Abuja and Lagos. It price ranges from 28,500 to 75,000 nfrom daily.

The ranch has about 4 restaurants that offers both local and continental foods and drinks. It is strongly advisable to eat what you are familiar with except if you are sure you are the type that don’t get upset for eating a new meal. Home delivery services is also been rendered if needed.

If you’re the adventurous type, you can ride on horses to cover a long distance at the Obudu Cattle Ranch or make use of the cable car. The cable cars runs from the base of the Mountain to the summit.

At Obudu Cattle Ranch, numerous tourist attractions abound to keep you all day. Some of the interesting attractions includes; The cable car (world longest cable car system), Obudu Cattle Ranch Cattle and horses. The waterpark, the Becheve nature reserve (canopy walk), the waterfall, the honey and yoghurt factories as well as the ancient villages. Other things that will make your stay there interesting is the Natural swimming pool, the golf course and squash courts and Flood lit lawn tennis court amongst others.

Worthy of discussing is the ranch at the Obudu Cattle Ranch. Cows were brought in from Holland for management by Farmfresh Limited. These cows provides fresh milk, meat, cheese, butter which are available at the diary section daily. Other animals been raised are pigs and birds which produces pork and eggs respectively in commercial quantity.

Also worthy of mention is the world-class water park with state-of-art swimming facilities and water slides for children, teens and adults.

ACTIVITIES AT THE OBUDU CATTLE RANCH

Obudu Cattle Ranch is filled with activities especially during holidays or festive periods as you can engage in Sightseeing, hiking, swimming, sports, working out, etc.

One of the important activities that takes place here is the Obudu Ranch International Mountain Race which is an annual 11.25 km mountain running competition that takes place in late January. It is known as the world’s richest Mountain Race with both the winners from the male and female categories receiving US$ 50,000 each while the total price sum is put at $250,000. It was started in 2005 by Donald Duke , a former Governor of Cross River State. The race starts at a height of 800 m above sea level and gradually, they ascend up to the summit of Obudu Mountain at 1600 m above sea level where the race ends. It an international competition and bring people of all nationality there.

Obudu Cattle Ranch is indeed nature at it best and it is worth the struggle, giving you an experience of a lifetime time. This article ends here. I hope you enjoyed it and will like to hear from you. What do you think about this place?