Ranks in the Nigeria Security and Civil Defence Corps (NSCDC)

NSCDC is a para-military agency in Nigeria empowered by lay Act No. 2 of 2003 and amended by Act 6 of 4th November 2007. The Nigeria Security and Civil Defence Corps was established to provide safety measures against any form of threat, attack or disaster against Nigeria and her citizens. They carry guns like other armed forces. 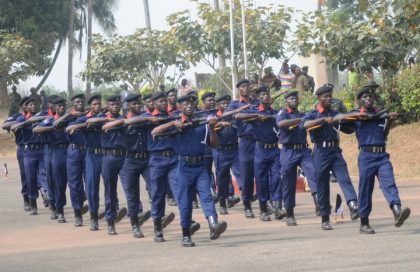 NSCDC Rank Structure just like any other ranks in the Nigerian Police, Army, Navy, Airforce and FRSC have an organized chain of command. The ranks in the NSCDC starts from the Assistant Cadre to the Commandant General.

Also be aware that the NSCDC new salary structure after the increase on minimum wage is also based on the level of your ranking if you want to be a civil defence officer.

If you are looking for information on how the Nigerian Civil Defence rank its officers, this post should be valuable to you.

New Salary Structure of the NSCDC: How Much an Officer in the Civil defence is paid

The new full salary scale as salary level in NSCDC after this minimum wage increase depends on your rank and promotions.

As earlier said, they are structured just like the Nigerian police and the military. There is no special salary structure for graduates. Recruitment into NSCDC in Nigeria is competitive.

If you know other NSCDC new salary structure figures after the new minimum wage increase, please let us know using the comment section below.

Just recently in November 2018, President Buhari increased the Nigerian Police Salary Structure so as to encourage them in the fight against crime, kidnapping, armed robbery and other security challenges in the country.

We are yet to see whether this increment will affect the salary of civil defence corp officers too and other paramilitary agencies in the country especially now that the president has increased the minimum wage from N18,000 to N30,000.

Main Functions Of The Civil Defence Corps in Nigeria (NSCDC)