In Nigeria, no matter the level of success you attain, if you are not married, your responsibility status is questionable. Little wonder every grown up single in the country have marriage at the back of their mind. 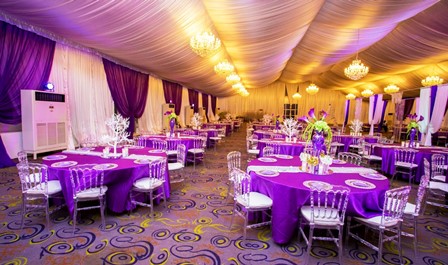 One of the enjoyable moment in marriage is the day the man and woman are pronounced husband and wife and the ceremony that follows. In many part of the world, it is known as the wedding reception.

The Yorubas are known for their flamboyant display of love, joy by the way of eating and dancing themselves out at the ceremony. It is known as Owambe in the Yoruba culture. This ceremony though has little differences in the programme of event which is influenced by the ethnicity of the parties involved, wealth and other factors, there are still some peculiarities that one can observe and from there, he/she can now add his/her flavor and icing.

Below is a detailed explanation of the programme of event at a typical Nigerian wedding reception.

This usually is the first event at the ceremony. In some wedding reception, the guest arrives some minutes to the start of the event. In others, due to delay at the church probably because of the photography session or others reasons, the guests arrive late. Either way, the place should be ready before the guest arrives.

The organizers and vendors should be nicely dressed in their attires and make sure everything is organized before the arrival of the guest. The tables and chairs should be arranged according to the siting arrangement. For chairs meant for specific guests, the chair covers should carry their name so confusion wouldn’t creep in.

While this is not mandatory, most wedding receptions in Nigeria usually do this. It is good you do it so guests who do not do them would know them. The order of the introduction is usually takes the following form.

The introduction of the bride’s parent, then the groom’s parent followed by the bridesmaids, flower girls and ring bearers, best man, special guest and the maid/matron of honor. This might take any form you want it to be.

Introduction Of The Bride And Groom

As they are ushered in, they come in grand style with a special music followed by the MC announcement and introduction of the bride and groom. This is regarded as the grand introduction.

We are Nigerians, we love religion, we love prayers. After the introduction, the next agenda of the wedding reception of the opening prayer and blessing of the meal. Usually, this is left for a religious leader to do.

However, in the absence of none or probably the family want something different, a family member, friend or well-wisher is task with the opening prayer and blessing of the meal.

Whichever is the case, the person task to do it should be notified beforehand so he makes himself available during this period.

After the blessing of the meal by whomever blessed it, the next step is eating. Often known as item 7, this is the reason many people came and regardless of how interesting the programme went, one may right off the reception if he/she get less than expected at this stage.

People came to eat and they must eat, this is usually provided in abundance.

For the wealthy ones and those that can afford, they sometimes make it a “serve yourself” kind of serving. This means guests would move to where the varieties of food available are place and serve themselves the one and quantity they can eat.

In most, the waiters do the serving of the food. They move to where the guests are seated and serve them what they have for them. Aside serving of the guests, the couples (bride and groom) would also be served, they need to eat too.

If you have attended a reception before then, you already know this step. After the eating of food by the guest and the next step is cutting of cake. This is done by the new couple.

They cut a slice of the cake, the bride feed the groom with half of it and the groom in return feeds his bride with the remaining half. This is a symbol of sharing and care.

The bride and the groom toast each other after which they interlock arms and drink. This is followed by the best man and maid/matron of honor making toasts to the bridal couple.

The couple’s dance is the first dance the couple would dance together at the reception as husband and wife.

This couple would show the guest their dancing steps. For the not so shy couple, this is usually a bomb. After the couple dance, the next dance is the father and daughter’s dance.

The father and daughter’s dance is a dance between the bride and her father. For those without a living father, they can get someone to stand in as the father to dance with. Some even use their brother. After this then comes the dance between the groom and his mother.

After these dance, the bride and the groom may demand the person in charge of music to play a particular song so they could dance to the song. This however is not compulsory.

In this stage, the bride tosses her bouquet to the single women in attendance.

After this step, a chair is set in the middle of the dancing floor for the bride to sit on while the groom removes the garter from her leg and tosses it to all the single men in attendance.

Now seen as fun, the man and woman who catches the garter and bouquet respectively are said to be the next to marry.

While the dance above is for the couple and selected people, this particular one is for everyone.

It is the work of the DJ to come up with songs that takes people away from their chair into a dancing mode. The couple can also provide list of songs if they so wish.

Vote Of Thanks And Ending Of The Ceremony

After the dancing, it is now time for the appreciation of the guest for coming by the couple.

After this is done, the wedding reception is over, everyone can now go to their respective homes.