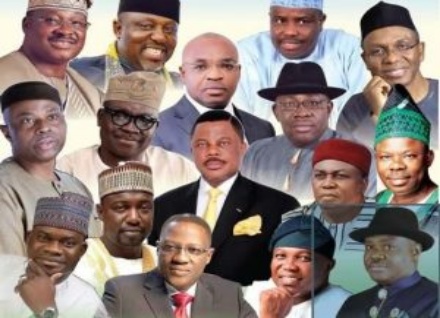 In Nigeria currently, the take home pay of Governors have quite reduced as opposed to what past Nigerian Governors earned. The reason is simply because of the new policies adopted by the Presidency to manage funds in Nigeria. The new policy does not only affect the Governors but other high ranking officers in the Nigerian Civil Service.

While the salary of public office holders has become a topic in the mouth of the masses, the rise of the cost of governance in Nigeria has been blamed on the allowances been allocated to these public officers who are meant to serve the people who elected them.

There has been an outcry that the salaries and allowances of governors and their deputies should be reduced due to the poor economical situation of the country to elevate more development but we haven’t seen any improvement, as corruption still persist.

This article shall expose the average salary of the Nigerian governor, salaries of the deputy governors, secretaries to the state government, and even local government chairmen. Note that not all are elected public office holders as some are appointed.

To become a Nigerian governor, there are some requirements as prescribed by the constitution and they are:

Currently, a Nigerian Governor’s basic salary is ₦2.22 million, their deputies earn  ₦2.11 million while their Commissioners earn  ₦1.33 million per month. It has been debated that given the present economic challenges facing the country, the salary of the Governors is still high and needs to be reduced since they still receive other allowances.

ALSO READ:  Actors/Actress Salaries in Nigeria: How Much They Earn (2022)

According to the 2009 approved earnings accrued to public office holders, a state governor is entitled to 400% of his annual basic salary which is  ₦8,894,820.00 and serves as allowances for maintenance of vehicles.

You should also know that aside the basic salary and vehicle allowance, there are also other entitlement accrued to the governor’s office for accommodation and furniture. All these allowances are dully provided by the state government.

Furthermore, the state bears the brunt on medical expenses spent of the governor. Upon the completion of his tenure, the governor would receive a severance gratuity of  ₦6,671,115.

It is the Revenue Mobilization Allocation and Fiscal Package (RMAFP) that sheds more light on governors spending in the country. Unfortunately, RMAFP did not set any limit to the allowance of the governor on foreign trips made from the state account. This is referred to as duty tour allowance for local trips which is give on request by the sitting governor

Here is full breakdown of the allowance and salary of the state governor in Nigeria:

Next we highlight the salary of deputy governors alongside other public office holders within the state.

The deputy governor is the second citizen in the state and he earns a little bit lower than the annual salary of the state governor. He receives ₦10,772,296 as salary per annum.

From this we can breakdown the salary of the deputy governor as:

The deputy also enjoys accommodation and furniture allowance just as the governor which is dully provided for by the state government as well as medical bills. No limit is set also for foreign trips.

COMMISSIONER SALARY/SECRETARY TO THE STATE GOVERNMENT

The commissioner and the secretary to the state government earns the same salary. Both receives a salary of ₦10,831,522 that consists of an annual basic salary of ₦1,337,225.

Below is a breakdown of their what they earn:

The only difference between the allowances of commissioners and the state secretary is in their foreign trips which is limited to $600 while local trip is set at  ₦25,000.

HOW MUCH IS THE SALARY OF  A LOCAL GOVERNMENT AREA CHAIRMAN?

The salary of Local Government Chairmen in a year is ₦5,994,659 when you add up all other allowances accrued to that office. Furniture allowance is received once in four years.

Here is a breakdown of what local government chairmen earn in the country:

While the above figures for these public office holders might seem juicy, the work in which they do isn’t. The only advantage is that you are paid well for occupying such positions. The job of a public officer shouldn’t be done because of the benefits one gains but from service to humanity and the people that elected you.

No wonder the performance of many state governors or public office holders has diminished due to their selfish interest of the occupants of such office.