Contrary to the belief by most people that the Nigerian Army are being paid heavily, the opposite is the case as the Nigerian Army salary structure after increase in minimum wage reveals that these men who risk their lives to defend the sovereignty of Nigeria go home with stipends.

In this post, we shall expose how much officers and men of the Nigerian army receive as salary this 2023 and their history. 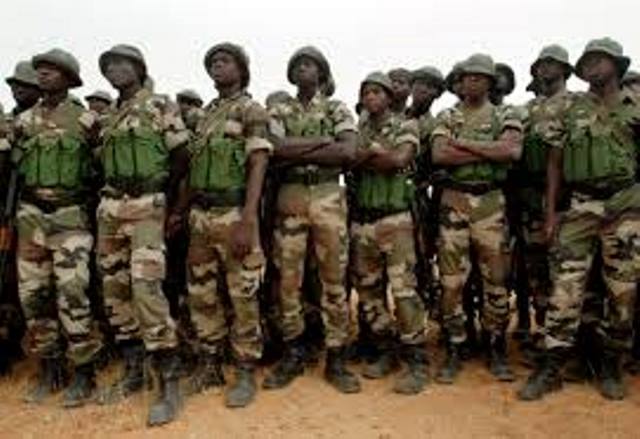 A Nigerian soldier is being paid according to his or her rank and years of service. The Nigerian Army’s basic function is to safeguard the nation against any sort of external aggression, support the interest of its citizens and country and it is known to be the largest in West Africa, however according to a report on globalsecurity.org most of the soldiers can perform a little more than the basic defensive operations.

The list below is a report seen as of January 2018.

Salary Structure of the Nigerian Army (2023)

Salary structure for non-commissioned officers in the Nigerian army after increase in minimum wage:

Those are the current salary of Nigerian soldiers. What is your take on the new Nigerian Army Salary structure 2023?

You might be wondering how much is the salary of soldiers fighting Boko Haram?

According to an authoritative report, it states that Nigerian soldiers fighting Boko Haram earn N60K as salary but another report debunked it and put the correct figure as N49,000 equivalent to $249 monthly or £157 monthly while daily feeding allowance is N500.

ALSO READ:  Things You Don't Know About Officers Commissioned Into The Nigerian Army

The Nigerian Army is among the most equipped military in Africa and its affairs are dully managed by the Nigerian Army Council. The Chief of Army staff is also the head commander of the army and his salary the highest.

Since its inception, they have been involved in various peace keeping missions and series of combats, both on the local and international scene. Latest of these wars is the war against the Boko Haram insurgents.

Real History of the Nigerian Army

Prior to independence, the Nigerian Army first began as the Royal West African Frontier Force which was founded in 1900.  Officers were dully trained by the British which saw them participate in the Second World War in support of Great Britain as part of the 1st (West Africa) Infantry Brigade, the 81st and 82nd (West Africa) Division and. They were also involved in combat at the East African crisis then.

During the independence period, the number of indigenous men and officers in the Nigerian army was totaling 18,000. Payments made to these officers then was in shillings. It was not until in mid 1970 that the number rose significantly to 126,000. At these time, salaries of these military men were paid in pounds.

These officers were split into three divisions. The reason for the increase in number was due to more able bodied people enlisting in the army due to the Nigerian civil war. Then, salary structure of the Nigerian Army officers had not yet being allotted by the supreme military council due to the crisis that rocked Nigeria. Possibility, officers were paid using the British pounds and scale.

History had it that it was until 1973 when the use of Naira was introduced, there was a high level of corruption among the commanders in the army. These led to the series of coup d’ etat that surfaced in the following years which ushered in regime upon regime in the country. It got to a point were Lieutenant Colonels were commanding brigades and sergeants were commanding platoons. The warrant officers then commanded officers too as divisions were fighting independently.

However, many inexperienced hands and poorly trained men who had no job enrolled in the Nigerian Army. This caused the image of the military to dwindle as lack in discipline and professionalism saw cases of civilian massacre, supporting a political divide infused into the army.

It was General Olusegun Obasanjo, who made an effort to reorganize his division when he was appointed the General Officer Commanding of the 3rd Division at that time. As a result of the reorganization by Obasanjo, salaries improved as he was able to improve on the logistics of division. This improvement heralded the end of the civil war as offensive tactics were deployed to defeat the Biafran soldiers.

After the Nigerian Civil War, there were casualties recorded which reduced the number of able bodied men available in the army to 62,000. The 3 divisions were also increased to four divisions which were stationed at different regions. This was to augment for the previous regional structure Nigeria operated before the civil war took place.

While the Nigerian military might not be the strongest in Africa 2023, it has participated successfully in a number of international peace keeping missions and tactical combat operations. The Liberian war is just and example and in fact, ECOMOG established by ECOWAS in 1990 is currently dominated by the Nigerian Army.

Nigerian army proved itself to be experts in mobilizing, deploying and sustaining brigade-size forces to provide the needed support for the peacekeeping operation in Liberia.  They have also participated under the umbrella of ECOMOG in conflicts in various countries, like Sierra Leone, Somalia, Rwanda, Angola and former Yugoslavia.

Nigeria’s participation in Liberia in 1990, 1997 and 2003 was mainly responsible for the quelling of the civil war in that country and the ousting of Charles Taylor, who was later exiled into Nigeria.

The Nigerian Army was also involved in 2004 at Dafur, Sudan as part of the Africa Union Forces.   The Nigerian army also deployed troop to Mali in 2013 as part of African-led International Support Mission to Mali.

The Federal government is responsible for payment and upkeep of men of the Nigerian Army. The government equally provides accommodation for them.  Many think they are paid heavily, but this is not necessarily so.  They risk their live to protect Nigeria, but the amount being paid cannot be said to equate to the services they deliver.

We just hope that the FG with this new increase in minimum wage, will look into the Nigerian army salary structure this 2023 and improve it to help our gallant soldiers cater for themselves.