The Nigerian army is among the top three military organization in the country. The Nigerian military has over the years, being ranked among the best armed forces in Africa, established to protect not only the citizenry but the territorial borders of Nigeria. If you want to start a career in the Nigerian military and would like like know more about the Nigerian Army ranks and Insignia (symbol), then this article covers it all.

Branches of the Nigerian military

The Nigerian military, which is saddled with the sole responsibility of protecting the citizens and sovereign territorial borders against external threats, operates on three codes namely: order, hierarchy and discipline. This means that the Nigerian armed forces is organized and abides by certain decrees and operates within a structural hierarchy, e.g Nigerian army ranks.

The military are further divided into three branches:

This post will discuss more on the ranks of the Nigerian army and their symbols.

Every service branch of the Nigerian armed forces has its symbols by which it is known. The Nigerian Army logo is one symbol that differentiates it from the air force or the navy. We shall explain the meaning of the eagle, the star sign and the meaning of the Arabic text writing just below the logo.

Ranks in the Nigerian Army

Nigerian Army ranks is the defined hierarchical structure that defines the position of its officers. Normally, you see different insignias on the uniform of army officers. This insignias differentiates them according to ranks where they belong.

Note that the ranks in the Nigerian army for commissioned officers is different from that of those who are non-commissioned. Also, salaries are paid according to ranks.

Below is a list of ranks in the Nigerian army for non-commissioned officers from the lowest to the highest:

This is the lowest rank in the Nigerian army hierarchy. These officer recruits have no insignia.

Lance Corporals are next after recruits and usually have one shoulder mark insignia.

A corporal is ranked with two shoulder marks as his insignia.

The Sergeant is the fourth rank for junior officers. Their insignia is usually three shoulder marks.

A Staff Sergeant is higher than the Sergeant and has three shoulder marks and a golden eagle on top as his insignia.

Also called Sergeant First class, warrant officers are the assistants of Master Sergeants with an insignia of a golden eagle surrounded by a golden crown of olive leaves.

Also known as Master Sergeant, these military officers take care of army equipment. Their insignia is the Nigerian Coat Of Arms with silver horses.

Below is a list of ranks in the Nigerian army for commissioned officers from the lowest to the highest:

Second Lieutenants is the first rank for commissioned officers in the army for graduates and they have have one silver six-pointed star on each of their shoulders as their insignia.

Next rank are the First Lieutenant. The insignia to differentiate these officers are two vertically aligned silver stars which is seen on their shoulders.

This is a high rank in the military especially for tactical troop organisation. Whenever you see three vertically aligned silver stars on the shoulders of any officer in the army, know that he is a Captain.

The insignia for Majors in the Nigerian army is a silver eagle. This rank is also the lowest field officer rank of the commissioned officers.

Lieutenant Colonels are ranked above majors with their insignia being a vertically aligned silver star with a silver eagle.

This rank’s insignia has two silver stars and a silver eagle. Colonel officers are normally in charge of regiments.

This is another high ranking officer in the Nigerian army in charge of commanding brigades. A Brigadier general insignia has three silver stars that form a triangle alongside a silver eagle on the top.

To know a Major General in the military, they usually have a golden emblem of the crossed sword and baton below a golden eagle on each shoulder of their uniforms.

The Lieutenant Generals are top officers who often are made Chief of Army Staff in the country. The gold vertically aligned emblem of the crossed sword and baton, a star and an eagle can be found on their uniforms.

In practice, the rank of the General is considered the highest rank in the Nigerian army. The reason is that it is practically impossible for anyone to attain the role of Army Field Marshal.

This information on the Nigerian Army ranks for commissioned officers would be helpful for those who want to start a career in the military. 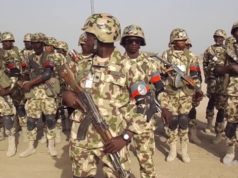 How To Join Nigerian Army As A Graduate

All Military and Paramilitary Ranks in Nigeria