The revised Electoral Act Amendment Bill was finally put into effect by President Muhammadu Buhari in February 2023. A change to the 2010 Electoral Act is made through the electoral bill. The bill is intended to assist Nigeria in upgrading its election system from previous ones. The eagerly awaited electoral handbook has generated considerable controversy since its signature. 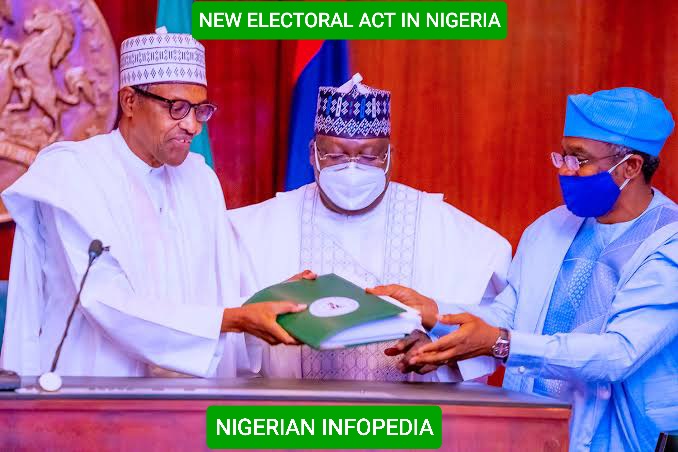 We’ll go through some of the new electoral law’s most important features and changes in this piece. We’ll also draw a conclusion about how its implementation might affect the voting process in Nigeria.

NEW ELECTORAL ACT IN NIGERIA:  ALL YOU NEED KNOW

The following information on the new electoral act in Nigeria is important for you to be aware of.

The Independent National Electoral Commission Fund is created by the new Act, whereby federal government payments and fund investments are made. This will help the Commission carry out its duties. The Act further establishes a deadline for the transfer of election monies owed to the Commission for any general elections, which is one year before to the subsequent general election.

With the ability to now directly collect monies for the administration of elections, this provision gives the Commission greater financial independence. This is opposed to receiving monies after being vetted by the Ministry of Finance as allowed by the previous Act.

EXTENSION OF TIMEFRAME FOR PUBLICATION OF ELECTION NOTICE

According to the new Act, the Commission shall issue a notice announcing the date of the election and designating the location at which nomination materials are to be handed no less than 360 days prior to the day designated for conducting of an election. This notification must be published in every constituency where an election is being held.

ALSO READ:  How Much Nigerian Musicians Charge Per Show (2023)

Contrary to the terms of the previous Electoral Act, which mandated that the notice be published by the Commission no later than 90 days prior to the election, this is. This additional time will allow the Commission to better prepare for the election. Additionally, it removes all justification from political parties’ partisan and propagandist politics and candidacy.

Political parties are required by the revised Act to provide a listing of the candidates they have endorsed who have won their respective party’s authorized primary. This must occur no later than 180 days prior to the scheduled general election time.

Contrary to the previous Act, which mandated that this submission be made at least 60 days prior to the date of the general elections, this one does not. Political parties must hold their primaries early due to the new deadline for submitting the names of party candidates.

EXTENSION OF THE CAMPAIGN PERIOD FOR POLITICAL PARTIES

This clause has the effect of giving political parties more time to spread their campaign messages to the general public. The voter has a lengthy period of time to determine which party and candidate will earn their support.

According to the amended Law, the Commission is required to maintain the register of voters at its National Headquarters as well as other places. This is given the stipulation that in addition to being preserved manually or in print, the register shall also be maintained in electronic format in its main database. This register was only maintained manually or in paper form under the previous act.

The Commission will be better able to keep accurate records and monitor the number of officially registered voters who will cast ballots in the future elections thanks to this admirable provision. As a result, this will prevent unregistered voters from voting illegally.

REVISION OF DEFINITION OF OVERVOTING

According to the rules of the new Act, “overvoting” would entail that more votes were cast at a polling place than there were accredited voters, not registered voters as was the case under the previous Act.

It appears, nonetheless, that the amended Act still permits the electoral tribunal or court to review the returning officer’s choice. It’s unclear from the Act if this must be done following INEC’s assessment or if it can completely replace it.

No political appointee, regardless of rank, may serve as a voting delegate, according to Section 84(12) of the revised Act. Additionally, it stipulates that they are ineligible for nomination as candidates for any election at the Convention or Congress of any political party.

This entails that political appointees must resign from their employment in order to be qualified to take part in the election as a candidate or delegate. Instead of using the same candidates over and again, positions can now be filled by new applicants who have never held a political position before.

Election-related deaths of candidates have in the past led to a great deal of conflict between political parties and politicians. According to the new Act, if a candidate passes away before polls open, the election will be suspended and will start within 14 days of the candidate’s passing.

When a candidate dies in an election for a legislative house position, the election is rerun, and the political party that lost the candidate may, if it still intends to run candidates, hold a new primary within 14 days of the loss of the candidate and send the name of a new candidate to the commission to take the place of the deceased candidate. The running mate must remain in the race (as the new candidate) and designate a new running mate for the governorship, presidential, and FCT area municipal elections.

The new Act permits the use of electronic devices, including smart card readers, electronic voting machines, and other modern gadgets, in both the voter registration procedure and the general election administration. The new Act also allows for electronic transmission of election results in conformity with the Commission-established protocol.

The 2023 Electoral Act Amendment Bill was enacted into law on February 25, 2023, by President Muhammadu Buhari. The Electoral Act 2023 is an admirable attempt to maintain the electoral system in Nigeria in line with those found in other democratic nations across the world. This will also serve as a useful reference as the nation gets closer to the general elections in 2023. We can only hope that this Act’s provisions are applied wisely. This will make it possible for Nigerians to express their right to vote both before and after the general elections that will take place in 2019 within the country.