Nasarawa is a north-central state in Nigeria. The state has the largest number of mineral resources, and as such is slogan is the ‘Home of Solid Mineral’. There are 13 local government areas in Nasarawa state. A number of important cities and towns include Lafia the state capital city, Akwanga, Keffi, Karu, Wamba, Eggon, Nassarawa and Doma. 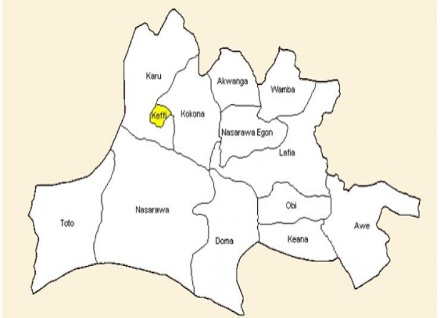 In this article, we’ll  list all notable towns that are situated in Nasarawa state local government areas.

In 1996, a move was made by the then military regime of late General Sani Abacha to augment the states in Nigeria. It resulted to the creation of Nasarawa State and six other states in the country. The state was sectiones out of the old Plateau State and since then it has been an independent entity on it own. The state took more heights to become one of the top tourist states in the country, which is obvious with its fascinating beautiful landscapes and spectacular highlands.

The people of Nasarawa State is of diverse range of ethnic groups indigenous to the state region. These occupants of the state sum up to 2 million people in the 2006 census conducted. Nassarawa State is composed of different ethnic groups each with its own distinct local dialect. With Hausa being the  most common among the people, there are other notable ethnic groups in Nasarawa state, and they include Afo, Agatu, Akye, Alago, Baribari, Bassa, Egbira, Eggon, Fulani, Gade, Gbagyi, Gwandara, Hausa, Jukun, Kanuri, Mada, Ninzom, Arum, Rindei, Yeskwa and Tiv.

Moreover, Nasarawa State has an estimate of 60% Muslims, with the remaining being Christians and a rare number of traditional worshippers. With respect to economic activities, farming is the major occupation of the Nasarawa people. The state can boast of commercial quanties of crops they produced, and they include cassava, yam, rice, maize, guinea corn, beans, soya beans, asha and millet. Aside from agricultural resources, Nasarawa state is blessed with precious mineral resources like columbite, coal and aquamarine. The state has the highest number of solid mineral resources, which consequently help the state economy.

List of Local Government Areas and Towns in Nasarawa State

Below is the list of urban areas that are in these local government areas:

Awe LGA of Nasarawa State has its administrative headquarter in the town of Awe, which ther area got it name from. Other towns and districts in the area include: Azaara, Tunga, Barkano, Baure, Booga, Gidrin Kadai, Hassan Gayam, Jagan Gari and Jangara.

Doma LGA is one of the thirteen local gvoernment areas of Nasarawa state. Doma Town is the area council headquarter, and there are other urban areas in the area. They include: Doka, Rubuki, Sarkin, Dawaki, Ungwan, Madoki, Agbashi, Alagye, Gidanrai and Akpanaja.

Karu LGA is a Local Government Area in Nasarawa State. With it headquarter located in the new town of Karu, there are many other notable urban areas situated in the are. They are few to mention include: Kondoro, Tattara, Karshi, Aso, Gurkur, Gitata, Kodape, Agada, Uke and Baggi.

Keana LGA is situated in the town of Keana and the area contains the districts of Oki, Obene, Kardarko, Kwara, Iwagu, Giza Madaki, Giza Galadima, Amiri, Aloshi, and Agaza. 6Keffi Local Government Area Keffi LGA is a prominent local government area in Nasarawa State. It has an headquarter in Keffi town, a commercial urban centre in the state.

There are also many other urban areas and district in Keffi LGA. They include: Yara, Sabon Gari, Liman Abaji, Kofar Goriya, Jigwada, Gangare Tudu and Angwan Iya.

Kokona LGA has an headquarter located in the town of Kokona, which the area got it name from. There are many urban areas and towns in Kokona LGA, and they include: Yelwa, Koya, Kana, Kofar Gwari, Kufan Gwari, Hadari, Garaku, Dari, Amba, Agwada, Atama, Audun Galadima, Auguwan Kuramai, Bakin Ayeni, Bassan Zarangi, Bazariye, Doma and Endo.

Lafia LGA houses the state capital, and as such it is the most developed local government area in Nasarawa state, and also functions as the headquarters of Lafia LGA. As an urbanised area, there are many towns in it, and they are few to mention include: Barikin Abdullahi, Lafia, Assokio, Keffi Wambai, Zanwa, Shabu, Kwandere, Mokama, Sarkin Pada and Barkin Rijiya.

Nasarawa LGA is named after the state. It is one of the thirteen local government areas in Nasarawa state and it has an administrative headquarter in the town of Nasarawa. Notable towns in the area include: Loko, Udege, Bakono, Guto Aguba, Aissa, Angewa, Ataga, Ayele, Aza, Dora and Gwafa.

Obi LGA of Nasarawa State is headquartered in the town of Obi, a popular urban area where the LGA got it name from. Obi LGA is situated in the southern end of Nasarawa State and towns in the area include: Zhemegli, Adudu, Agwatashi, Deddere, Tudun Adabu, Duduguru, Gidan Ausa, Riri, Akanga, Atabara, Abiuga, Agrugwa and Agwade.

ALSO READ:  How to Register a Church in Nigeria: Step by Step Guide (2022)

Toto LGA is one of Nasarawa state local government area. It has an administrative headquarter in Toto town, where the area got in name from. Notable towns and districts of Gada, Toto, Umaisha, Gwargwada, Ugya, Shege, Shatan Kwato, Katakpa, Kanyehu, Gadagwa, Dausu, Bugakarmo, Abebasen, Akureba, Akwashi, Araba and Buga make up as the urban areas in Toto LGA.

Wamba LGA is one of the thirteen local government areas of Nasarawa State. It has an administrative capital in the town of Wamba, a renown urban centre in the state. Other notable towns in Wamba LGA include the following: Mangar, Angba, Jimiya, Angbo, Dechu, Gbagi, Gbata, Gbogi Ugu, Gbombu, Gbriji, Gbude, Gitta Barmo, Gitta Kasa, and others.

Nasarawa state is one of the best states to visit in Nigeria. It is interesting of note that here is the home to the the fascinating Farin Ruwa Falls in Wamba local government area of the state. The river falls is reputed to be one of the highest falls in Africa, and this has attracted lots of tourists to the state.

Another intriguing attraction site is the Salt village in Keana Local Government Area, which pure iodized salt is mined from. With this, there is no much doubt that Nasarawa State is surely the ‘Home of Solid Minerals’. To give you a guide, this write-up outlined the list of notable towns and urban areas that are located in the local government areas of Nasarawa state.